Acquiring Fernando Rodney by trade in exchange for the proverbial PTBNL, as the Cubs did yesterday, is the baseball equivalent of buying a beat-up Ferrari for a fixer upper and putting the charge on your AmEx. Best case scenario, you’ve got a Ferrari and you don’t have to pay until the bill comes due (at which point you’ll be happy to do so). Worst case, you’ve got a beat-up piece of junk, and the bill lingers in the back of your mind for weeks until someone calls to collect. Obviously, the Cubs are hoping for the best-case scenario for Rodney, or something close to it. But it’s baseball, and that doesn’t always happen. Is it likely to? I don’t know. As will become clear shortly, the best way to understand what Rodney is all about these days is probably to watch some recent videos and talk to a scout. I am neither a video nor a scout. But I have noticed a few things, and if you care to, you can read about them here.

The first thing that’s worth knowing is this: Rodney has been good in the past. Very good. His 2012 ERA of 0.60—a mark that was to some degree, no doubt, a product of luck—was the best posted by a qualifying relief pitcher ever. Ever. And while ERA certainly isn’t the end-all, be-all of pitching statistics, all those other thousands of relievers over the years have had equal access to Fortuna’s charms or condemnations, and nonetheless failed to post marks nearly as good. (For what it’s worth, Rodney’s 2012 DRA was 2.24—third in the bigs behind Aroldis Chapman and Justin Verlander among pitchers with at least 50 innings pitched.) Here’s that 2012 line, just because it’s so pretty:

In short, the upside here is high. But Rodney hasn’t reached his 2012 level since, posting the following lines over the last three seasons:

What you see there are two essentially identical seasons in 2013 and 2014—good seasons, but not great—and then a pretty rough 2015, which is of course still in progress. And it’s not hard to see the difference this year in the final two columns: while Rodney isn’t really walking that many more batters, he’s just not striking them out at the same rate any more. And that’s a problem, because striking batters out is kind of Rodney’s thing: from 2012-2014, he struck out 27.3 percent of the batters he faced, which put him eighth in the majors in that category. Without an elite strikeout rate, Rodney simply isn’t an elite or even effective reliever. With one, he is.

So where have those strikeouts gone? First, it’s worth establishing that the lack of strikes has little to nothing to do with the catchers Rodney has been throwing to. According to the new BP stats on DRA run values, the runs he’s lost from CSAA in 2015 are equal to just -0.6 (he’s gotten more strikes called for him than the average pitcher does) which is not great, but nonetheless approximately equivalent to what he got in 2014 (-1.14), 2013 (-1.36), or even 2012 (-1.95)—all are higher only on an absolute basis, not on a per-innings basis. So it’s not his catching: it’s something Rodney himself is doing. In order to find out what, precisely, let’s look at what he did well in 2012. Here’s his pitch usage in that season, and in those since: 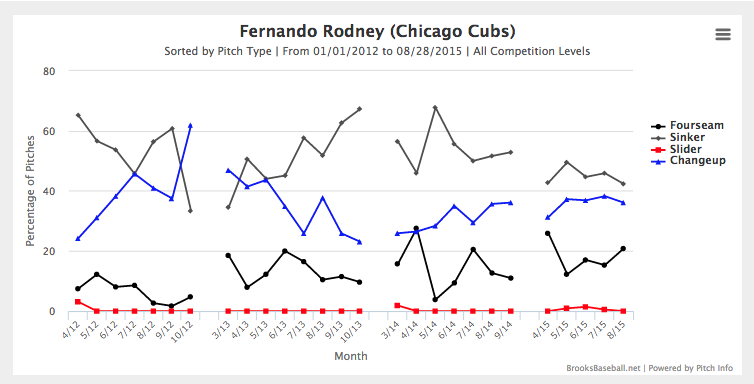 Since 2012, Rodney’s stayed pretty darn consistent in what he throws: a fourseam fastball, a sinker, a slider, and a changeup. What hasn’t stayed consistent is how often he throws them. In 2012—his successful season—he increasingly went to the changeup as the season wore on, and his monthly strikeout rates roughly tracked his monthly changeup use rates:

By the end of 2012, then, Rodney was a pitcher who relied heavily on his changeup, threw a sinker about a third of the time, and threw in a four-seam fastball every now and again to make hitters honest. Why did he change? The short answer is because, if baseball was as easy as finding something that works and sticking with it, every pitcher would be Pedro Martinez and every hitter would be Babe Ruth. The long answer is because his arm slot changed: 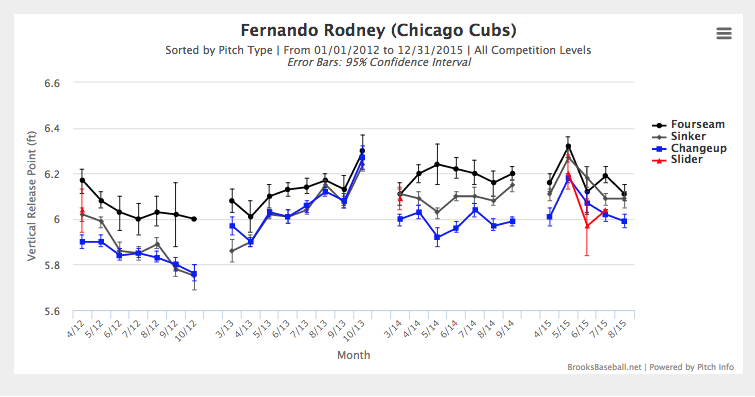 That’s a chart which shows Rodney’s vertical release point on all of his pitches. You’ll notice something super weird happening there: Rodney’s arm kept drifting upwards.* Here’s a picture of Rodney delivering a pitch in 2012: 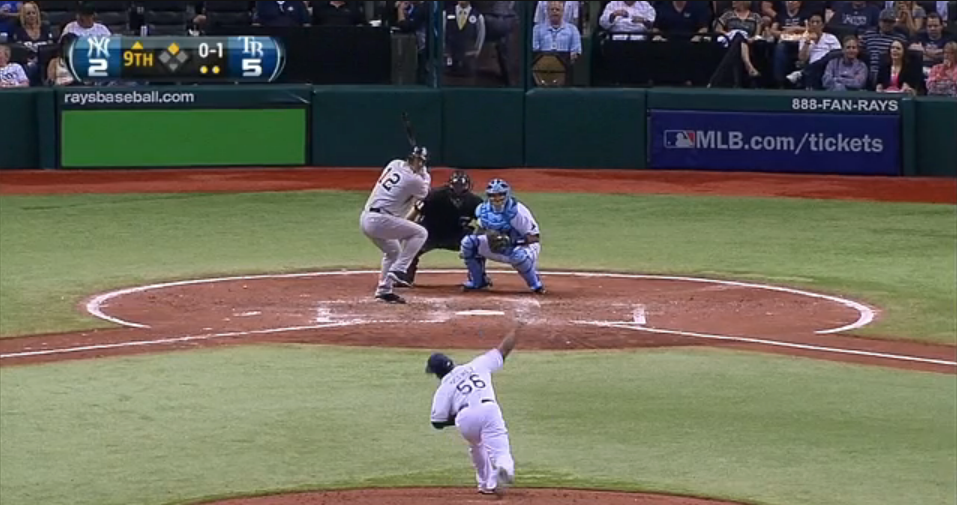 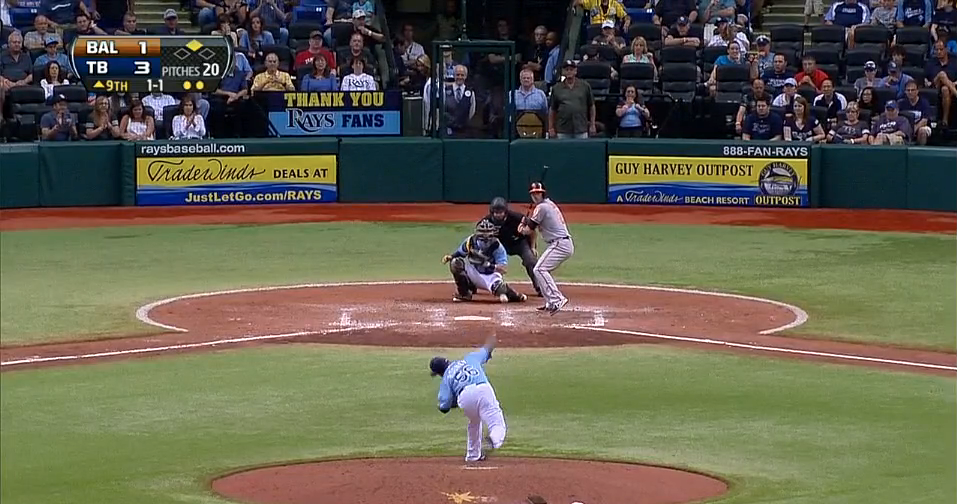 Now, I am #NotAScout. But the difference here is pretty stark. In 2013, Rodney’s head is thrust significantly over to the first base side, leaving his arm higher up and giving hitters a much clearer view of the changeup. Well, when you give big-league hitters a good view of a pitch, they tend to rain down on that pitch with a vengeance. And, well, here’s a chart showing slugging percentage against Rodney’s pitches, in 2012 and thereafter: 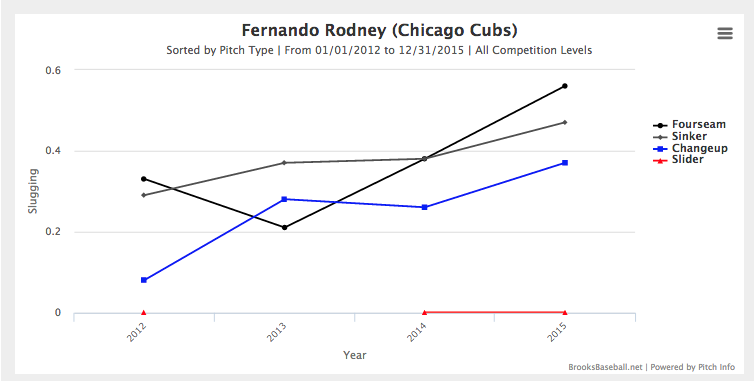 That’s a nice clean upwards trend. Ok, so that might be something worth knowing: Between 2012 and 2013, Rodney’s arm slot changed, which made all of his pitches—including his most important pitch, the changeup—less effective. But Rodney followed 2012 with two pretty decent seasons, in 2013 and 2014. It’s only been this year (2015, for those of you who missed it) that he’s been downright bad. What’s changed this year? Well, let’s go back to that old canard, velocity: 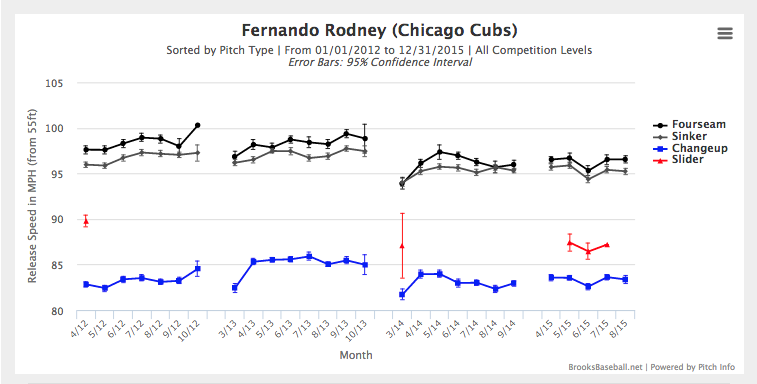 I admit I’m cheating a little bit here. The velocity has dropped—definitely—but it dropped in 2014, not in 2015. It’s possible that it took hitters a year to take full advantage of Rodney’s new combination of raised arm slot and lowered velocity (and maybe there’s something to that: his monthly ERAs rose essentially every month in 2014), but I give big-league hitters a bit more credit than that. I think it’s far more likely that something changed this year (an injury, perhaps?) that I’m missing and that a scout would pick up on. And I, as we know, am not a scout.

That said, I am someone who believes in understanding as much as possible about the situation before I make a judgement, and in researching this piece I’ve learned a bit more about Fernando Rodney than I did before. In short: he was excellent in 2012, a year later his arm slot raised, and a year after that his velocity dropped. Now, he’s not very good. With any luck, he’ll get back to success in time for the stretch run by dropping the arm slot a little bit and seeing if his changeup once again becomes an effective out pitch. If he does, the Cubs may well have a Ferrari on their hands, and #HatsToTheLeft will have gained another champion. If not, well, then that’s just baseball.

*Thanks are due to Sahadev Sharma for the tip that this might be worth looking at.

Tags: Fernando Rodney, relief pitching, What's Up With |
Rian Watt
Follow @rianwatt
Rian is the editor-in-chief of BP Wrigleyville, an author at Baseball Prospectus, and a contributor at VICE Sports and FiveThirtyEight. He's based in Boston, and misses Chicago every day.
read more from Rian Watt