It wasn’t quite on the order of the sword of Damocles—the Cubs are too happy right now to feel anything approaching anxiety—but it was certainly an open question heading into the workout day on Thursday: What was Addison Russell’s status? The last anyone had heard of his health was on Tuesday night, manager Joe Maddon was asked postgame what he’d seen on the field that caused him to take Russell out of Game Three of the NLDS:

The interview room was hot on Tuesday, and Maddon seemed cagey as he answered the question. That’s not typical. And now we know why: Addison Russell will be out for the entirety of the National League Championship Series. Starlin Castro will stay at second, quieting those who’d suggested he might move to shortstop in the event that Russell was indeed out, and Javier Baez will continue manning Russell’s old position, picking up where we left off in NLDS Game Four on Tuesday.

At this point, it’s fair to ask what all this means for the Cubs. The first and most correct answer is that we don’t know.* Baez could go on a tear, and lead the Cubs to the World Series. Russell might have been weak at the plate anyway, even if healthy. There’s no way to honestly say that we know either what could have happened or what will; we can only speak of the likely. And also this: the fact that without Russell, the Cubs’ bench gets a little less flexible, and that you might see a reliever—perhaps Jason Motte?—added to the roster in lieu of another position player. Why? Let’s break this down a little further. Here’s how the Cubs stacked up positionally in the NLDS:

Some of those guys can’t play infield positions, so let’s get remove them from the list, along with Russell himself. This is who the Cubs are left with:

That’s … a pretty good group. It’s less infield depth than you’d like to see, with just Coghlan and La Stella on the bench on most days (i.e., when Coghlan’s not starting), but it’s not bad. There are other options on the roster to back up Fowler, Soler, and Schwarber in the outfield—Jackson and Denorfia, and even Bryant in a pinch—so I’m guessing you’ll see La Stella come into the infield as the first option off the bench, with Coghlan coming in as a last resort late in games if misfortune strikes.

But wouldn’t it be easier to add someone like Jonathan Herrera to the roster and leave it at that? Not necessarily. Think of it this way: Do you think it’s more likely that Herrera is the key to an NLCS game—given all the infield depth already on the Cubs’ roster—or that a late-inning reliever like Motte will have a big moment? I know what side I’m on there. If Motte isn’t quite ready to return from injury, I could imagine someone like Neil Ramirez get a spot on the roster, or even Zac Rosscup (if you’re looking for a lefty). Despite their recent success, the Cubs have been relying pretty heavily on their relief corps, and a fresh arm couldn’t hurt.

But I’ve gotten away from the center of the story, which is that Russell—the Cubs’ top prospect, then rookie, then star—will be sitting in the training room for the next 10 days at least. What will the team lose by his absence? Perhaps not as much as you might think, at least offensively. His postseason line—.250/.240/.417 over 13 plate appearances—isn’t too concerning in isolation (that sample size is miniscule), but it is a little worrisome when viewed in concert with Russell’s numbers over the final month of the season: .237/.330/.387, over 106 plate appearances. That’s not terrible (the average NL shortstop hit .252/.303/.371 this year, per the BP Stats Department), but it’s also not amazing.

No, Russell’s value in 2015 came less from his bat than from his glove, which was capable of the highlight and routine plays alike. Baez, by all accounts, has a tremendous glove at shortstop as well, but his range and pop-up times might be just a tick behind Russell’s. And, of course, it’s not really Baez who’d be replacing Russell on the roster, it would be Herrera, or someone very like him. That’s the big step down: not the replacement, but the replacement’s replacement.

Which brings us back to Jason Motte. The Cubs’ bullpen has been brilliant lately: they have a 2.56 ERA since September 1st, and a 1.31 ERA over their last seven games. That doesn’t mean they aren’t getting tired, or that they couldn’t use a fresh arm. Check out the velocity drops on fastballs in October from three key Cubs relievers: 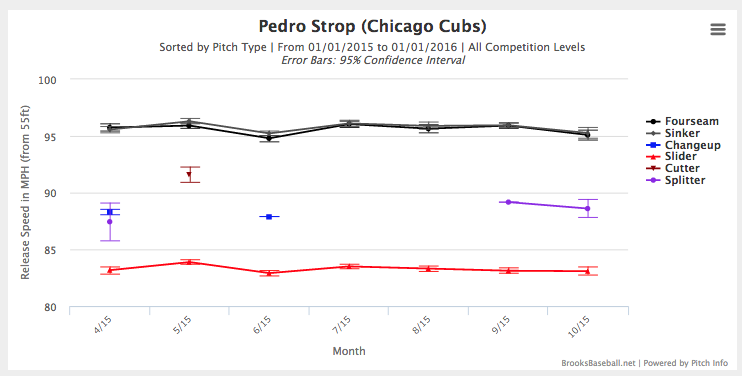 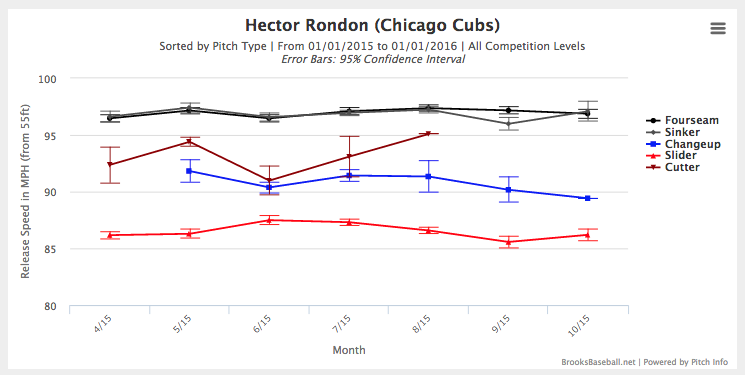 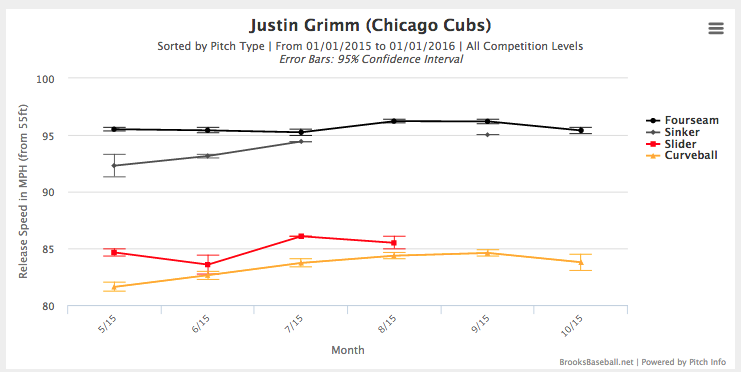 That’s not huge, but it’s something. October adrenaline can only take you so far. Remember, Motte won’t be the guy (if he’s added) coming in to close out the ninth inning of a one-run ballgame. He’ll be the guy who comes in to take the seventh inning of a four-run ballgame, freeing up pitchers like Rondon, Grimm, Strop, or Cahill to take the more difficult innings. Again: it’s not the replacement, it’s the replacement’s replacement. At this point, I’d rather have Motte on the roster than Herrera. He’s needed more right now.

Of course, it would have been best if Russell had never been hurt. But adding Motte isn’t a bad Plan B, at all. And if things go well? An NLCS sweep, a healthy Russell thereafter, and a ticket to the World Series. Then it’s right back to Plan A. Stay tuned.

*This is true almost all of the time.

Thanks are due to BP’s Harry Pavlidis for research help on this piece, with an assist to Rob McQuown and Ben Lindbergh.