Position:  Shortstop, Third Base, Second Base

Year in Review: This feels like the only reasonable place to start:

For everything he endured in 2015—injury, heartache, and the assured internal struggle of watching his friends succeed at the highest level before he did—Javier Baez deserved this moment.

It seems like ancient history now, but it wasn’t so long ago that Baez—not Schwarber, Russell, or even Bryant—was the original member of the prematurely named “Core Four,” and was considered the centerpiece of the Cubs bright future. The strikeouts have always been a legitimate concern, but the absurd power generated by other-worldly bat speed left scouts and front office-types drooling at the potential production from a middle-infielder. However, Beaz’s 2014 debut went so poorly (.197 TAv) that he was summarily written off in many circles. His offseason directive was to alter his approach in an effort to make significantly more contact. It is simple in concept, but much harder to make the necessary changes translate to game speed. Before we review his approach alterations and subsequent results, we must keep in context that his 2015 major-league sample was preciously small, and his dominant 70-game stretch in Triple-A may actually be a better barometer (.911 OPS, 24 percent K-rate). Starting with his approach at the plate, let’s check out Javy’s hitting, baserunning and fielding performance.

During his 52-game 2014 major-league debut, Baez exhibited a tremendous propensity to swing-and-miss, and this was especially true with two strikes. The scouting report spread quickly, and opposing pitchers feasted on his inability to lay off or make contact with pitches both above and below the strike zone and they rarely threw his anything in the zone once there was two strikes on him. 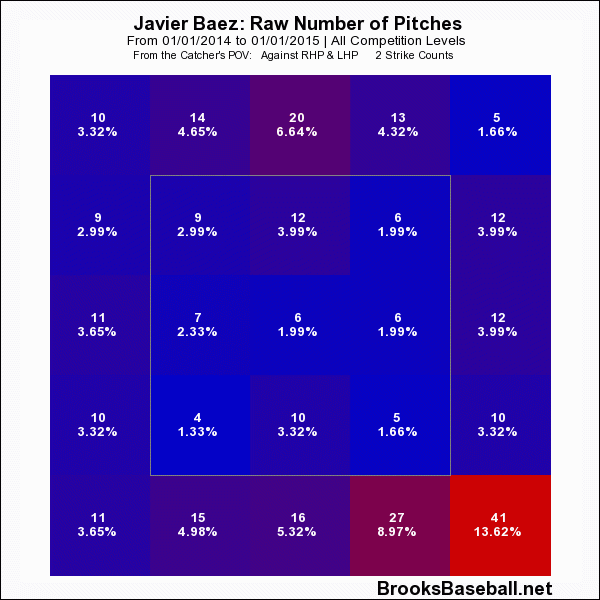 This flaw was pronounced enough to warrant the coaching staff to direct him to dramatically alter his two-strike approach. Without mechanical changes, the odds of prolonged success were becoming longer and longer.

Baez clearly took the direction he was given to heart, as we can see with his 2015 two-strike swing:

The result is one of the more pronounced swing-changes I’ve witnessed in a young player. His lead foot stays on the ground throughout the load and swing, while his hands stay further back and are much quieter. Let’s see how it translated to the batter’s box.

The league targeted him in a similar fashion as they had in 2014: This is rather shocking to juxtapose against the 2014 profile, as it doesn’t even look like the same hitter. There is noticeable improvement on the two-strike front as well, although pitches below the zone remain a concern. However, it should be noted that Javy showed a high-proficiency for making contact on any two-strike pitch that was in the zone. An additional benefit to the approach change is greatly improved balance. This shines through when considering the improvement Javy made on pitches outside the zone. Baez’s approach changes paid dividends in the ever-important spray chart arena as well. He managed more line drives to right and right-center in 28 games in 2015 (eight) than he did in 52 games in 2014 (five).

While the approach modifications and subsequent results are encouraging, we need to be careful not to simply look at the slash line when evaluating Baez’s season, as an unsustainable BABIP of .412 means those numbers will certainly regress without additional adjustments. However, the larger sample of his 2015 minor-league games produced a BABIP of .402—yes, still unsustainable—which may hint at a player who can outpace the league in this area.

In an excellent article in mid-September shortly after Baez was called up this year, Jeff Zimmerman pointed out that Baez’s Predicted K% stood much closer to his 41.5 percent K-rate of 2014 than his current 2015 tally of 22.2 percent. This salient assertion was based on his SwStr% of 18.5, which gave him a Predicted K% of 41.6 (Predicted K% = 2.25 * SwStr%). While Baez’s K-rate rose just as Zimmerman said it would—ending at an even 30 percent—something else happened as well: he started making significantly more contact, bringing his season SwStr% down to 16.4 percent (Predicted K% of 36.9). While a nearly-37 percent Predicted K-rate is still far too high to ensure Baez is a sure thing, the numbers trending sharply positive in the last three weeks of the season must be a reassuring sign. As we move into 2016, keep an eye on his SwStr% as an early indicator of which direction his strikeout rate is going. It seems perfunctory to suggest, but the difference between Baez striking out 30 percent of the time and 36 percent of the time could be the difference between an All-Star and a bust.

The final area that needs to be examined in Baez’s season is his contact rate, and the quality of contact that it translated into. A major area of concern in 2014 was his abysmal 58.7 Z-Swing%, which was a significant factor in directing the aforementioned approach changes. This year, Baez made legitimate improvement in this area, registering a 68.2 Z-Swing%, while improving his overall Contact% to 67.7 from 59.0 in the process. Further, 92.3 percent of his 2015 contact was of the medium or hard variety, a massive improvement over his 2014 mark of 81.4 percent. Again, the sample size was small, but what you witnessed was a young hitter making significantly more and significantly harder contact than a year ago.

Joe Maddon has been vociferous regarding the impressiveness of Baez’s athleticism and the well-rounded nature of his overall game, but beyond that his proficiency on the basepaths may be the most under-discussed skill of any young Cub. Baez—not a man who makes his living by getting on first base—has compiled 80 stolen bases in his minor-league career, while being caught just 20 times. Would you have guessed that he had just eight more home runs than stolen bases during his minor-league tenure? Baez made just three efforts at thievery in his major-league stint this season (caught twice), but he was successful on 18 of his 21 minor-league attempts. If given the opportunity to start and blessed with a full-season of health, 25 stolen bases is well within reach. When combined with his athleticism and instincts for the game, suddenly you have a player adding a legitimate amount of value on the basepaths. Keep this in mind when considering comparative value with players like Kyle Schwarber and Jorge Soler.

Baez’s defense is a bit of a conundrum, and in many ways his proclivity towards making avoidable errors may be analogous to his propensity for striking out. One of the most impressive athletes on any given field, his versatility provides value in yet another beyond-the-box way, as he logged starts at all four infield positions this year, this despite the limited amount of time he spent in the majors. Advanced defensive metrics rated him below-average at shortstop (-28.1 UZR/150) but strongly above-average at third base (+70.1 UZR/150). Because these numbers are based on such limited exposure—and also the still-evolving world of advanced defensive metrics—we must again lean on the eye-test for further evaluation.

Baez has always been lauded for having a strong arm, and we saw nothing this year to dissuade us from believing that is true. His offseason weight loss also appeared to improve his range, and the idea of having him—a shortstop by trade—manning third base, while Addison Russell handles shortstop with Starlin Castro at second base is a tantalizing one. Again, his ability to limit errors on routine plays is likely the last piece of the defensive puzzle. If he can manage to improve in this area, you have an athlete with strong enough hands, range, arm, and instincts to contribute at any position on the field.

There may not be a player in the majors with a greater series of possible divergences. He seems to be the first player discussed in every trade article, yet it is also plausible that he is the starter at second or third base for the Cubs once April rolls around. He also represents the first man up at shortstop in the event of injury to Russell, as was the case in the final game of the NLDS and entire NLCS.

You’re probably wondering and possibly miffed that I keep suggesting he could start at third base, and with good reason. However, if the Cubs do engage in a blockbuster trade that includes one of their young corner outfielders, look for the possibility of Kris Bryant defensively supplanting the exiting outfielder, and Baez to take over regular duties at the hot corner. If the front office opts not to trade anyone, Baez could conceivably be relegated to a super-utility role. This is a role he could be well-suited for because of the versatility we discussed, but my personal preference is to see him on the field every day in some capacity.

It’s easy to forget that Baez is still just 22 years old. The potential that made him the ninth overall pick in the 2011 draft remains firmly intact. If he can continue to improve his contact rate and limit his strikeouts and defensive errors, an All-Star game or several is still a legitimate possibility; in this uniform or the next.