Brevity, as it so often has been said in sentences much shorter and more concise and less redundant and less repetitive than this one, is the soul of wit.

For John Lackey, brevity was the soul of his 2015.

Last season, among qualified starting pitchers, Lackey ranked third in pitches per plate appearance (3.49) and tied for third in pitches per inning (14.3). Both were the lowest totals of his career, and came in a season when, despite possessing a 37-year-old right arm, Lackey had by most any statistical measure his best or second best season in nearly a decade.

And while those 2015 marks were career bests, they were also continuations of a trend that began when Lackey returned from Tommy John surgery in 2013. Of his four lowest pitches-per-inning seasons, three have come have come since the start of 2013. Three of his five lowest pitches-per-plate-appearances seasons have come in that same span.

So what has changed? One potential explanation is that Lackey has dramatically increased his fastball usage early in counts.

And while Lackey is firmly entrenched in his late 30s, his velocity with his fourseam and sinker was better last season than it was in his late 20s: 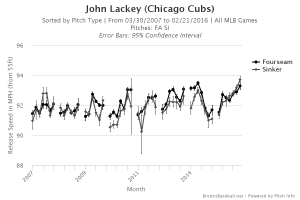 In fact, in October, Lackey was consistently touching 94 with his fourseam fastball, his highest velocity month in more than a decade.

As a result of the increased fastball usage, batters are being more aggressive against Lackey. In 2015, Lackey hitters swung at the first pitch 37.1 percent of the time, the highest frequency of Lackey’s career, and more than seven percent above his career average. As a result, plate appearances are ending earlier.

Is it all positive? The fewer pitches required to get outs from a 37 year-old arm, the better, and as you can see below, last season, his opponent’s OPS on the first pitch was nearly 100 points better than his career average, despite the increased first pitch swing frequency:

While the numbers suggest that Lackey is thriving with the high fastball rates early in counts, the Cubs need look no further than last season’s NLDS to see both the good and bad of Lackey’s first pitch fastball tendencies.

In Game One, Lackey recorded six outs on the first or second pitch of an at-bat, and five outs on the third pitch. He needed just 86 pitches to get through eight innings. Of the 86 pitches Lackey threw, 71 were fastballs (83 percent). More amazingly, of the 24 first pitches, 22 were fastballs. Cubs hitters were aggressive early in counts, especially against fastballs, and the results were a plethora of ground ball outs.

That was the good.

Game Four was the bad. In the contest’s second inning, with one on and two out, Lackey’s Cardinals led 2-1. Jason Hammel stepped to the plate and took a first pitch slider left over up and over the plate back up the middle for a base hit. Javier Baez was up next.

I wrote after the game:

Entering the game, Baez had eight plate appearances against Lackey, the most of any pitcher in his career. Baez was 0-for-8 with four strikeouts. On paper, it seemed like advantage Lackey—despite the small sample size—except for one thing: how Lackey attacks Baez:

Baez was ineffective against Lackey, but he certainly had a pretty damn good idea of how Lackey would attack him, especially on the first pitch.

Baez was ready for a 94 mile per hour fastball on the outer half, and launched the pitch into the right field bleachers. His home run put the Cubs in front, and they would never again trail in the game, or the series.

Previously, Lackey had success staying away from Baez with four-seam fastballs, and sliders, especially on the first pitch, but he had gone to that well against him repeatedly. Throw in Lackey’s 2015 track record of going with fastballs away on first pitches to righties, and Baez had a solid idea of what to expect. He would get a pitch middle-out, and it would likely be a fastball.

Lackey had become eminently predictable, and Baez made him pay. It must be mentioned, of course, that Lackey had come back on three day’s rest, something he had not done before in 2015. Nevertheless, it is a reminder of the downside of becoming overly dependent on your fastballs early in counts.

What should the Cubs expect in 2016? Lackey is a power pitcher, who, as it stands right now, will likely throw his 40,000 regular season career pitch some time in May, and currently ranks fourth among active pitchers in innings pitched. Despite Lackey’s velocity not only remaining steady but increasing, for a pitcher at this stage of his career, pitch efficiency is welcome. And while Lackey might not reach a combined 70-75 percent usage with his fourseam and sinker early in counts, this three season stretch suggest he will continue to rely on his fastballs above significantly above his career averages.

Tags: Brevity, Fastballs, John Lackey, Souls, Wit |
Andrew Felper
Follow @@AndrewFelper
Andrew is a contributing writer to Baseball Prospectus, SB Nation, and Sox From the Couch. A graduate of Boston University, he resides in Massachusetts with his wife, their two cats, and unwatched box sets of Deadwood, Band of Brothers, and the final two seasons of Treme.
read more from Andrew Felper