Your first thought or impression upon hearing about a no-hitter, either in-progress or completed, is probably something like “Wow!” That covers thoughts two through twelve, too–general feelings of astonishment and excitement at the possibility or completion of a historic feat. Around thought fifteen context starts to creep in, which cuts in every direction; e.g., “this is David Ross’s first no-hitter!”, or “this Reds lineup is not great,” or “goodness gracious, Jake Arrieta already has a no-hitter in the last twelve months.” It’s only around thought thirty or forty that, maybe, you think to yourself: “No-hitter? I wonder what went wrong.”

At least, I know I think that thought. I also know it’s a terrible thought, in many ways. It pivots from wonder and joy at the incredible feat I just witnessed to acceptance of it and comparison to something else entirely. It is a thought with some utility, though. As my peers have pointed out, in various pieces of wonderful coverage of his performance last night, Arrieta wasn’t truly at his best. Once we’ve given his incredible performance its due appreciation, it’s worth considering why and how. Separating him from perfection: four walks.

With one out in the second inning, Jake Arrieta walked Jay Bruce on five pitches. It seemed entirely inconsequential at the time, as the Cubs had already jumped out to a 4-0 lead. With their ace on the mound, the outcome of this game already felt like a foregone conclusion, and a stray baserunner or two wouldn’t change that. As it turned out, there would be another reason to pay close attention, but at the time of this plate appearance, the walk barely registered.

Looking back on it, it’s very quickly clear Arrieta wasn’t “on” in the way he so often has been in the last 18 months. Here’s where David Ross set the target for this first-pitch sinker: 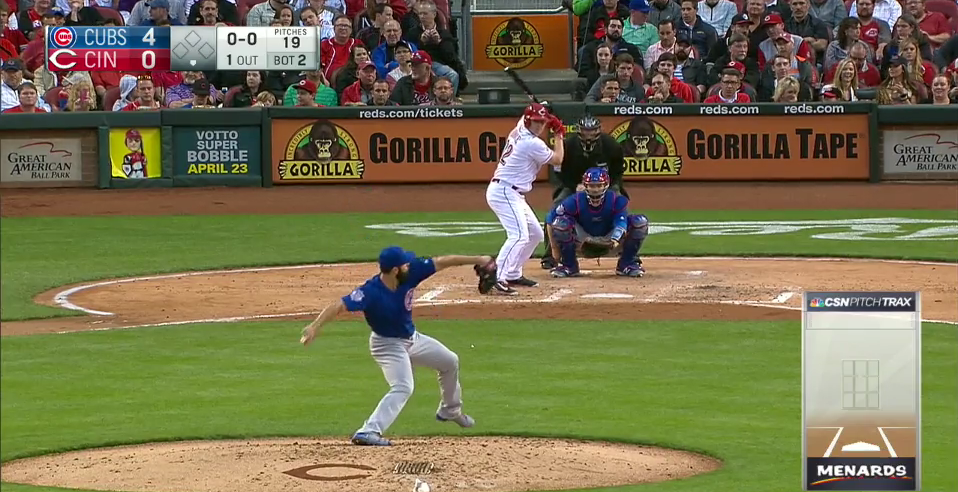 Bottom of the zone, generally where sinkers are supposed to go in order to induce weak contact and easy outs. Here’s where it ended up: 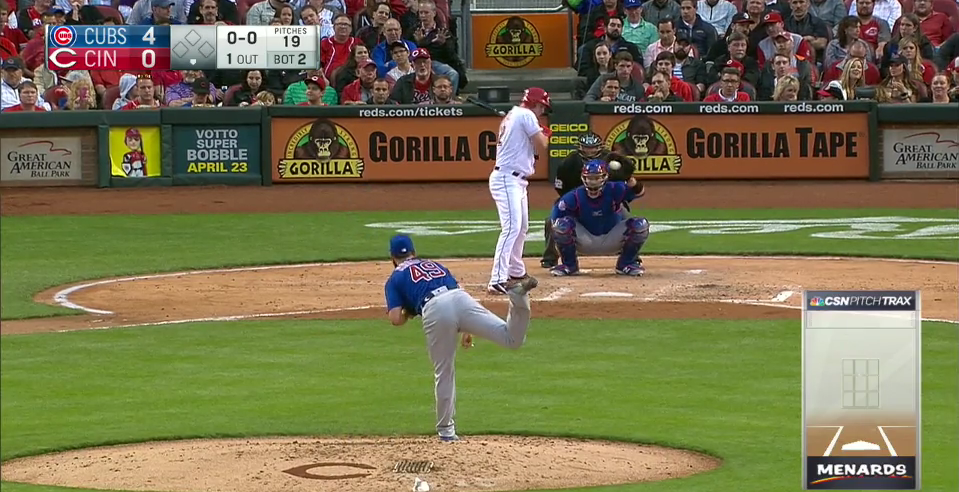 High, over the plate but definitely not where Ross had set up. I don’t know how “literal” Ross is with his targets, but presuming these pitches were intended to end up low, Arrieta missed pretty substantially. A second-pitch slider at the top of the zone induced a swinging strike, but three straight sinkers missed high-and-away, and Bruce trotted to first. I won’t repeat this for every pitch, but here are Ross’s targets:

Those really are three separate pitches–all sinkers targeted at the bottom of the zone, all of which ended up in the same general area but not where they were supposed to. I’m no scout, but to me that suggested Arietta was having some mechanical problems, and a shot to the dugout as Bruce took his base showed Chris Bosio wiggling his shoulders from side to side, presumably sending some kind of reminder about mechanical consistency to Arrieta. Whatever he was doing, it worked: Arietta struck out the next two batters, using five sinkers, all of which were either in or below the zone, and the inning was over.

This plate appearance tells us a few things, especially after breaking down Bruce’s. First, the adjustment Arrieta made held: this at bat featured five sinkers, all low in the zone, many located nearly perfectly over the outer or inner edge and missing only by inches. 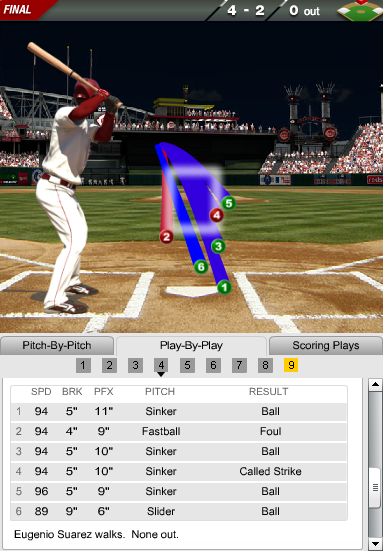 What surprised me about this matchup wasn’t the way Arrieta pitched, but the choices he (and presumably Ross) made about approaching the batter. Suarez is off to a decent start to 2016, but he also doesn’t appear on any but the most inclusive lists of offensive threats, and the Cubs were already up by five runs. I expected Arrieta to throw a sinker squarely in the zone once the count went full; instead, he pitched how I would expect him to pitch in the closest of games, throwing a well-located slider that Suarez nevertheless didn’t chase as it dove down out of the zone.

Walking the first batter of an inning, though, is never a good sign. Would this be the start of a Reds rally? Nope:

David Ross giving another reminder, in case you needed one, that this game was nearly as much his achievement as Arrieta’s.

This plate appearance was, in many ways, reminiscent of Bruce’s in the first: a walk on five pitches, three of which were sinkers above or at the top of the strike zone that Ross had initially set a low target for. At this point, everyone watching was presumably aware that Arrieta hadn’t given up a hit yet, and five innings is long enough that you start to at least think about the possibility of finishing the game that way. Here’s what Jim Deshaies and Len Kasper had to say after Arrieta’s third pitch of this at-bat, a curveball aimed low that missed high.

JD: “That one got away from him a little bit there.”

JD: “Yeah, and he’s thrown a lot of pitches at the top of the zone; [home plate umpire] Dana DeMuth has called the high strike and he hasn’t been overly generous with the one down around the knees.”

Without coming out and saying it, they’re acknowledging that Arrieta hadn’t been completely dominant, during a plate appearance where he looked nearly mortal. It’s plausible Arrieta was targeting the upper part of the zone intentionally, as Deshaies seemed to suggest, but to me, this looks like the recurrence of his earlier mechanical issues. Naturally, the next batter, Jordan Pacheco, saw three sinkers, all in the bottom half of the zone, and hit exactly the kind of easy grounder that pitch is supposed to elicit. If Arrieta was having mechanical issues, he was correcting them just as quickly.

If the possibility of a no-hitter is lurking around the edges of one’s consciousness at the start of the sixth, it has set up camp right in the middle by the time the ninth rolls around. Entering the inning, Arrieta was already at 102 pitches, but per Brooks Baseball, his velocity stayed mostly stable, and he certainly didn’t look gassed. 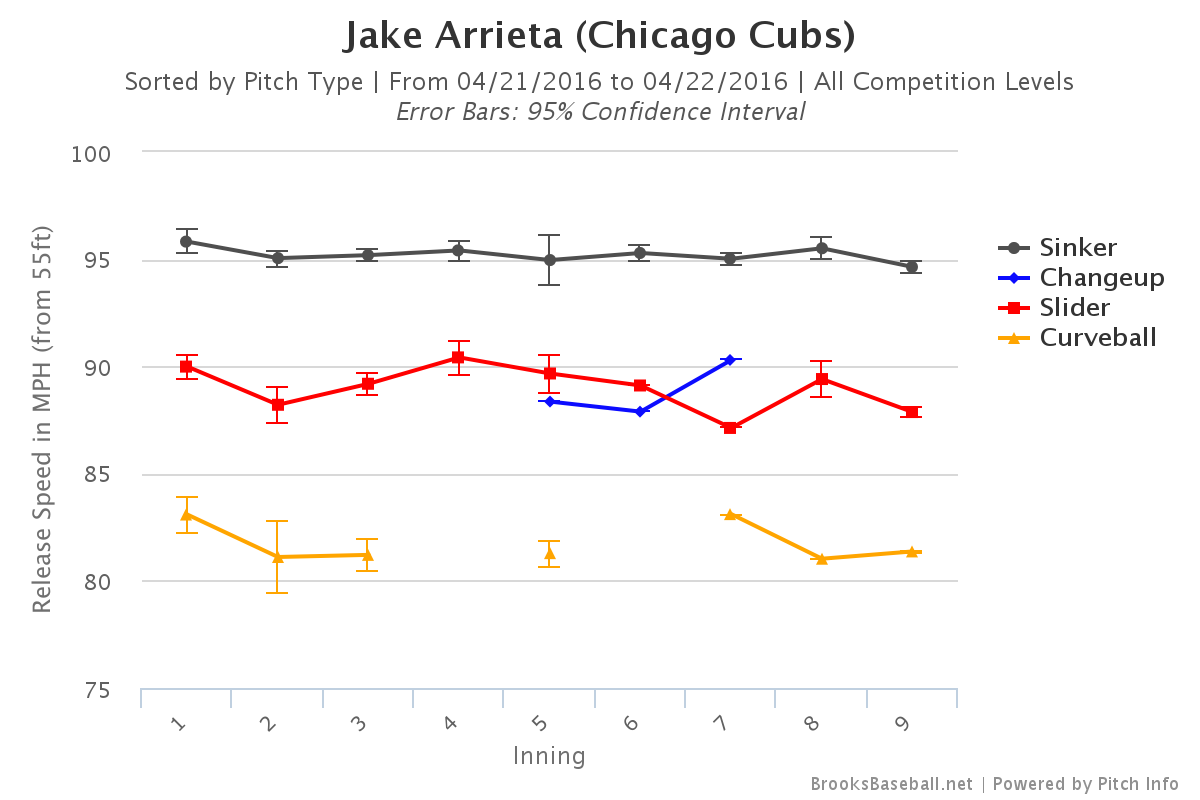 Still, I (and probably everyone else) watched him take the mound with no small degree of trepidation. The Cubs’ odds of winning were as high as they can possibly be while the game is still going on; the only tension was around Arrieta’s feat. With that in mind, the ninth didn’t start in promising fashion. The plate appearance began with three straight sinkers at the top of the zone, one of which Schebler foul tipped and two of which he watched go by for balls. The fourth pitch was an 86-mph slider, even higher than the sliders, which Schebler swung under so hard he nearly fell over. Still, Deshaies noted that the last four pitches had all been at the top of the zone, and seemed to think that wasn’t Arrieta’s intention, saying “that’s the challenge for Jake: to control the adrenaline, and to continue to pitch the baseball, and not overthrow.”

The next pitch was a curveball in the dirt: a ball, but a ball that looked like it did generally what it was supposed to, missing too low rather than too high (and in the zone). With the count full, Deshaies said Arrieta “doesn’t have to challenge,” perhaps acknowledging that he might prefer to give up the walk than to risk a hit. The next pitch was another sinker, this one missing low rather than high.

And that was it, in terms of offense from the Reds. A pop out and two flyouts later, the Cubs had their 15th no-hitter, and Arrieta his second. The takeaway from these four plate appearances is that Arrieta clearly didn’t have his best game last night; his control and mechanics were shaky at various points, and he said so himself after the game. It’s doubly impressive, therefore, that he was able to adjust so quickly, realigning his mechanics and regaining his control, often in the space of a single batter. Arrieta also showed an underrated ability, even outside of no-hitters: to miss in the right way. When his pitches weren’t where he wanted them, they weren’t in the middle of the strike zone, but way outside it. That’s how a pitcher ends up with a no-hitter with four walks–by making mistakes that lead to balls rather than solid hits–but it’s also how a pitcher can make the most of his abilities during any given start where he’s not at his best.

Finally, I think we perhaps got a glimpse into Arrieta’s psyche. He clearly wanted the no-hitter–after the game, he acknowledged it was special, “for not only myself, but for [Ross] in his last season”–and he perhaps changed the way he pitched to get it. If he was up 16 runs but with some number of hits already allowed, I bet he’s more aggressive in some of the above three-ball situations than he was last night. Perhaps that’s a good thing, and perhaps it’s not–I can imagine someone wanting Arrieta’s focus only to be on winning the game and nothing else–but it’s a very understandable and endearing thing. Arrieta wasn’t perfect last night, but these four isolated moments of imperfection show the challenges he was facing, and make the eventual feat all the more impressive.