When the idea was posed by the BP-Wrigleyville staff to break down the luck/skill quotient of each of the Cubs’ five members of the starting staff, I immediately volunteered for Kyle Hendricks. It seemed like a great idea at the time: after all, I’ve already written extensively about Hendricks this season, so it should have been a breeze… or so I thought. With a little reflection, I realized Hendricks was akin to that soft-tossing lefty we all faced occasionally in little league. The whole team is thrilled to see him take the mound, ready to feast on a steady diet of softly tossed meatballs down the middle. Six frustrating innings later, you’ve scratched out just one run and walk away having no idea what just happened. The same thing plays out when Hendricks takes the mound: exuberant sluggers taking massive hacks, only to come up empty before glancing back at the catcher, futilely wondering whether they may be imagining their own majestic whiff. Such is the way of Hendricks, who seems to be equal parts pitcher, professor and magician. Bear with me as I attempt to unpack why his success is attributable to skill, rather than luck.

Through a series of fabulous recent articles, we’ve come to learn that the Cubs’ starting staff is setting a historic pace in preventing batted balls from becoming hits. The staff mark of .250 BABIP-against is lapping the field, and their 44.5 contract-controlled runs saved tally (through Sunday) was more than 60 percent better than the second place Dodgers. In fact, the current .250 BABIP-against mark is the greatest mark in the history of baseball, era adjusted. If Jake Arrieta and his .242 BABIP-against is the brutish King Arthur of the Cubs’ rotation, then Hendricks and his .245 mark this season play the finesse role of Lancelot to perfection.

There are generally four ways for a pitcher to induce weak contact: velocity, deception, command, and movement. In Hendricks’ case, you can immediately scratch velocity off the list, as he registers on the lower end of velocity scales for right-handed starters. It gets a bit fuzzier when considering deception, as Hendricks doesn’t have a traditionally deceptive delivery, but he does get lauded for his exceptional pitch-sequencing and approach. There is no doubt that his intellect gives him an edge in this department, but command and movement will always be the biggest reasons for his success.

Let’s first take a look at Hendricks’ career batted-ball data to see what we’re working with:

The first thing that jumps out is a nine percent increase in soft contact compared to last year (when he was still really good), coming in at an extremely healthy 27.6 percent. It is interesting that this reduction is coming almost solely from the medium contact category, rather than the hard contact total. What I garner from this is that when Hendricks makes a mistake, it’s still getting hit hard, but even a 1.7 percent reduction in this area is a real improvement so we shouldn’t gloss over it like it’s meaningless. Further, the huge shift from medium contact to soft contact suggests that his command has probably improved, as a seismic shift such as this is rarely because of chance. To go hand-in-glove with this, he has seen a strong reduction in the percentage of line drives hit against him, and a nice spike in popups. Combining a 2.7 percent drop in line drives with a 3.4 percent addition of popups has an almost perfectly linear effect of getting around six percent more batters out. This is definitely boiling it down in with too much granularity, but when you consider it in this manner, the roughly four percent improvement in BABIP-against compared to last year starts to make significantly more sense. So, we now know that the results lend credence to the legitimacy of Hendricks’ performance, but how did he do it? Command and movement, of course:

It shouldn’t be terribly surprising to find out given his uptick in results, but it’s impressive nonetheless to note that Hendricks’ is registering sharper vertical break on every pitch in his arsenal. Especially eye-opening is the marked improvements in his already-excellent curveball and changeup, meaning good pitches are getting even better. Now for the lateral stats:

When reviewing the lateral movement, we find essentially the same story as with the vertical tallies. Hendricks has made significant advancements with his arm-side run on all of his “straight” offerings, with a particularly stunning 23 percent improvement in his changeup movement. The addition of nearly 25 percent more break on his curve isn’t hurting anything, either. Irrefutably, every one of Hendricks’ pitches are moving more both vertically and laterally. That is skill, not luck, friends. Finally, let’s review Hendricks’ signature weapon, his pristine control: 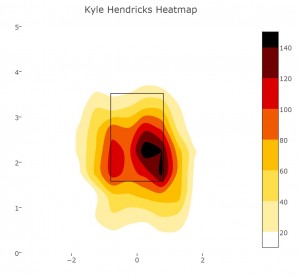 Hendricks had a coming out party in 2015, as the public was treated to witnessing the tremendous command that fans of the Cubs’ minor-league system had been witnessing for years. His 2016 heat map shows obvious improvement even from his impressive 2015 effort, with the heaviest concentration of pitches dropping roughly four inches into the extreme bottom right corner of the zone. The quality and rarity of a starting pitcher’s heat map resembling this simply cannot be overstated, as this is the result of a pitcher with excellent command further refining his craft to a level almost never achieved. The combination of improved movement and command tell you that Hendricks has clearly improved as a pitcher. Two charts illustrate why he’s been striving to zero in his command on the lower right corner as he has: As Hendricks’ pitches get progressively lower and further away from right-handed batters in the zone, his BABIP-against generally decreases. This is not particularly surprising, as it is true of the majority of pitchers. However, with someone such as Hendricks who has below-average velocity, hitting this spot over-and-over again becomes increasingly important. His BABIP-against zone tells part of the story, but I’ll offer one more argument for your consideration: Hendricks’ career ISO-against zone profile tells a powerful story, as the quality of contact allowed in the lowest and furthest right portions of the zone drops precipitously. He’s been effective at generating this type of contact his whole career, but the noticeable difference in precisely locating in the very corner this year shows up perfectly when analyzing this season’s ISO-against chart. In the world of pitching, every inch matters when it comes to location. As Hendricks has embodied that this year by abusing the lower-outside corner, batters have only been able to generate one single extra base in 33 at-bats. This is absolutely not a coincidence, but rather one of the finest examples of professional refinement of skill to be found anywhere in baseball.