It’s been just over a month since catching prodigy Willson Contreras was called up to the major leagues, and in true Cubs prospect fashion, Contreras made his debut with a bang against the division rival Pirates. Contreras sent a first pitch home run into the bleachers during his first at bat at Wrigley Field, and since then, Contreras has done nothing short of dazzle.

However, it hasn’t all been smooth sailing for the 24-year old, who not only is learning to adjust to facing major league pitching for the first time, but is also learning the ropes of handling the best pitching staff in baseball while he’s behind the plate.

But within just three short weeks, the narrative has changed for Contreras. “I feel a lot more comfortable (with the pitchers now),” said Contreras told the Tribune’s Paul Skrbina. “Now, I feel like I’ve had 10 years with the team, but I just have a month.”

The confidence that Contreras exudes while taking on a workload that would intimidate nearly any newcomer under the lights of one of baseball’s biggest stages is what has helped lead him to his smooth success within the first month.

Joe Maddon, who is known for playing the flexibility game with his rosters, is playing it no different with Contreras, who has been frequently slotted into left field since his debut, making sure to keep is bat which is currently a major asset in the lineup.

“It’s nice that he’s that versatile,” Maddon said of Contreras. “It’s going to keep his legs from getting beaten up … when you’re a catcher and you play a different position, it’s almost like a day off. All this stuff is going to benefit him long term.”

Contreras is currently posting a line of .291/.376/.515 in his first 117 plate appearances with the major league club. He’s also posting an ISO of .223, and among all catchers in baseball (minimum 100 plate appearances), Contreras currently has the second highest TAv at .314, just behind the Nationals’ backstop Wilson Ramos. That said—unless the Cubs have the next Buster Posey on their hands, which is unlikely—these numbers are probably unsustainable.

It’s not all show stopping, super-star looking offensive numbers for Contreras, though. Being a rookie that hits the ground running comes with it’s share of blemishes, ones Contreras is no exception to. Contreras is currently posting a strikeout rate of 29.8 percent, but he’s also taking cues from the Cubs’ excellent plate discipline (they lead baseball in walk rate at 10.6 percent) and taking walks at a 9.8 percent clip,which is well above league average. That’s an asset to any player’s plate approach, much less one who’s facing major league pitching for the first time in his career.

But the important part right now is that when Contreras is productive at the plate, he’s productive enough for the exceptionally high strikeout rate to be kept at bay and not be a major concern.

The concern will be once the league begins to adjust to Contreras’s approach at the plate. Right now, Contreras’s style seems very typical for a rookie, as he’s having trouble with low breaking pitches out of the zone, and the high fastballs. But his eye for pitches he can absolutely destroy is keen, and he’s feasting on anything that’s left right down the middle, as well as some inside pitches. Take a look: 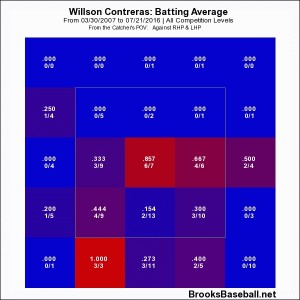 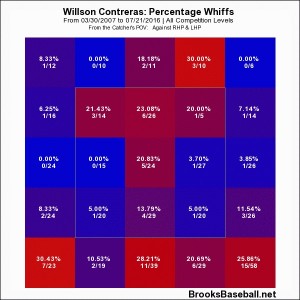 The comforting thing about this is that these are simply growing pains that nearly every major league hitter goes through. For now, he certainly isn’t considered a liability in the lineup—he’s actually been quite the asset, and that’s all that Cubs fans really need to worry about right now. The major league adjustment period is a very real thing, and no matter how well a player may produce in Triple-A or how high their ceiling may be, there’s no way for a player to adjust to the major league level of play without getting a little dirt on their face, taking their lumps, and working through it. It’s something teams have to endure, hence why many teams call up prospects in August and September during un-salvageable seasons. It’s also why the Cubs chose to give players such as Almora, Contreras, and Carl Edwards, Jr. a shot in June instead of finding out what they are capable of in the middle of the dog days of summer, a time when every strike matters more and more as the calendar nears October. Trust that if Contreras suffers a slump and needs to be sent back down to Triple-A or sat, this organization will know when to do it.

Last April, Cubs fans thought that seeing the graduations of Addison Russell and Kris Bryant would be the end of exciting call ups at Wrigley for some time. Though the arrival of Contreras on the scene hasn’t been as much of a splash to the baseball world as Bryant or Russell were, the impact he’s making on this club at the proper time in a crucial season is invaluable, and not to be taken lightly. Contreras could potentially suffer a slump, the league could figure him out, and he may not be able to properly adjust back in the middle of a playoff race. He could prove too fresh and fragile behind the plate. Injury could even occur. Baseball is unpredictable, but the important part is that Contreras is helping contribute right now, and has already left a strong mark on the Cubs in 2016. No matter what happens moving forward, Contreras already succeeded via his strong offensive contributions (and excellent choice of walk-up music) in his first month in the majors.

Tags: Debuts, Strugg City 2k16, Struggles, Willson Contreras |
Cat Garcia
Follow @TheBaseballGirl
Cat Garcia is a freelance baseball writer from Chicago. When she is not writing or reading about baseball, she can be found at her place of employment, located at 1060 W. Addison Street.
read more from Cat Garcia

3 comments on “A Month In, Contreras Still Shining”

I love that you mentioned his choice of walk up music. For those folks who aren’t aware, it’s Simon Says, by Pharoahe Monch (https://www.youtube.com/watch?v=T7Fy5w2klbg), and it’s hilarious how they make sure to cut the song right before it gets to the lyrics. Anyone who doesn’t know why that’s funny should listen to the song.

He has definitely exceeded my expectations.

“That said—unless the Cubs have the next Buster Posey on their hands, which is unlikely—these numbers are probably unsustainable.”

When Albert Pujols came up with the Cardinals and was an incredible hitter immediately I said, “that’s not sustainable.” Of course it was, and he was one of the top offensive players in all of baseball for more than a decade.
I think we’re overdue for our Pujols, and hoping Contreras is it.