It’s the finale between the Chicago Cubs and San Diego Padres. Something, something, Anchorman quote.

Top Play (WPA): In the top of the first inning against Padres right-handed starter Paul Clemens—apparently no relation to Roger Clemens—the Cubs got themselves on the board quickly. Dexter Fowler led off the game with a double to the right field corner, followed by an odd Kris Bryant double that only was able to advance Fowler to third base out of the fear his of being doubled off at second if it were caught.

That brought Ben Zobrist to the plate, and he smashed a tripled into center field that scored both runners and put the Cubs up 2-0 (+.133). Jorge Soler would hit a sac fly for the first out of the game, putting the Cubs up 3-0 before Kyle Hendricks even had to take the mound and forcing Clemens to throw 22 pitches in the opening frame.

Bottom Play (WPA): The Padres had the tying run on third base with nobody out in the third inning after Wil Myers hit a triple to make the score 3-2. Yangervis Solarte was first up, and he popped up the pitch to Bryant at third. Alex Dickerson was the next to try to get the runner home, but he also popped out to Bryant (-.075). Ryan Schimpf represented the last hope for the Padres in the inning, and Hendricks worked him away before throwing him a changeup high in the zone that froze the batter to end the threat and preserve the one-run lead. 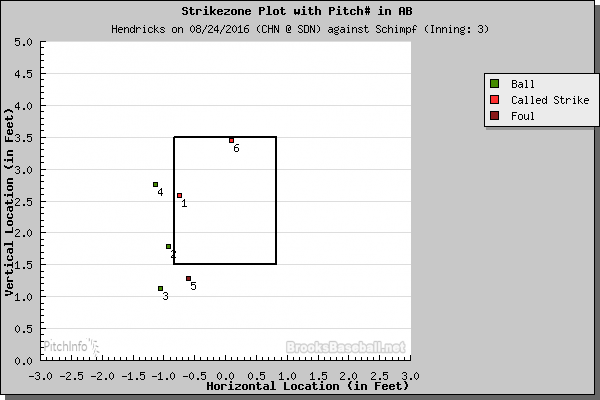 Key Moment: With it still being a one-run game in the top of the sixth inning, Bryant led off with a deflected single to center field. Zobrist hit a single on a hard line drive, moving Bryant to second base, and Soler popped out for the first out of the inning. After the runners each advanced a base on a wild pitch from Clemens, Addison Russell hit a grounder that bounced under the glove of shortstop for an error, scoring both runs. That put the Cubs up 5-2 and caused Padres manager Andy Green to go to a leftie from the bullpen named Brad to try to keep things from getting out of Hand (Joke credit: Mike Banghart).

That was really all the runs the Cubs would need to finish off this game, with a final score of 6-3. It wasn’t the best day for the Padres, who struck out eight times in six innings against Hendricks. On the plus side, they did wear throwback uniforms from the late ‘90s that I particularly enjoy. So, cool.

Trend to Watch: We were all amazed when 24-year-old catching prospect Willson Contreras came up earlier this season and immediately was able to contribute on the best team in baseball. Through his defensive skills behind the plate, incredible bat at the plate, and surprising ability in left field, Contreras has impressed fans and team personnel alike. But after an initial hot start, Contreras went through a bit of a slump—he hit .231/.307/.363 in the month of July and struggled to lay off those pitches low and away. 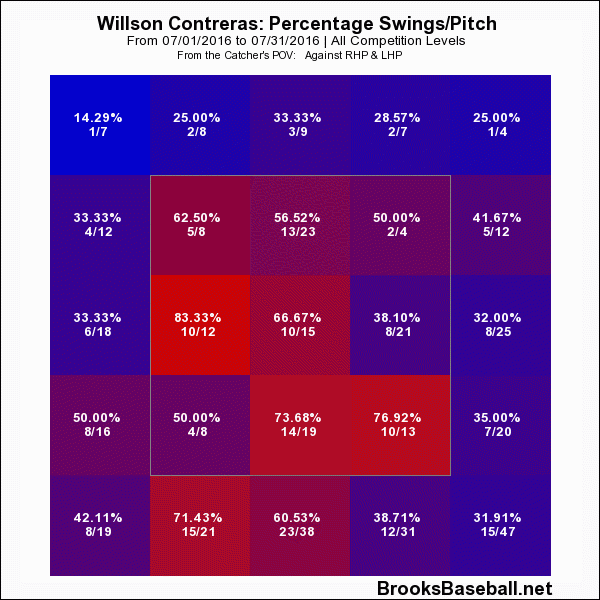 But it seems that Contreras has made some adjustments in August, as he’s hitting .296/.377/.463 in 61 plate appearances so far this month—not including the home run off Hand today. Check out the change in the percentage of swings on pitches in that low and away zone, down from 31.9 percent to 13.0 percent, as well the higher rate of swings at pitches inside the strike zone. 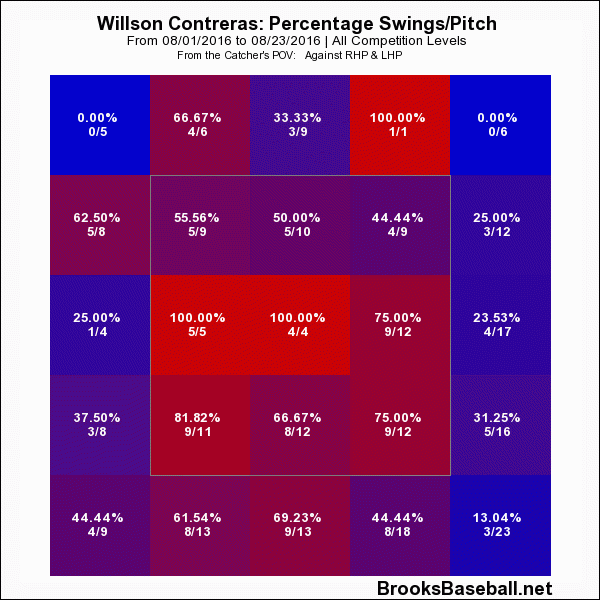 Coming Next: After sweeping the Padres this afternoon, the Cubs move on up the California coast to take on the Los Angeles Dodgers tomorrow night at 9:10pm CST. Mike Montgomery gets his second start with the Cubs against notorious Cub-killer ‘TBD’ for the Dodgers. It could be right-hander Ross Stripling, just recently called back up from the minor leagues, who has 71 1/3 innings pitched in 11 starts in the big leagues this season with a 4.04 ERA/3.82 FIP/4.19 DRA. Montgomery has tossed 13 total innings for the Cubs since being acquired from the Seattle Mariners and has a 2.77 ERA/4.66 FIP with a 2.93 DRA for the entire season. The game will be broadcast on ABC 7 and 670 The Score on the radio.