The last time the Cubs found themselves in  Chavez Ravine, this transpired…

Which, of course, is the second greatest moment Cubs moment in Dodgers Stadium after this… 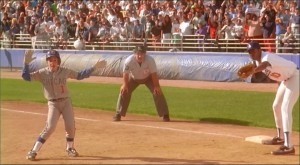 When the Cubs hit the West Coast starting Friday night, it will be light on the Arrieta and Rowengartner, but it will feature two of the best teams in baseball. The Dodgers have won four out of five, and after being eight games back in late June, they have pulled two games ahead of the San Francisco Giants.

The Cubs pitchers are running into the Dodgers offense at an inopportune moment. After a sluggish first half, the offense has been raking in the second half, especially in August (.280/.336/.488, 5.4 runs per game). They’ve been getting it done primarily with power. This month, among NL teams, the Dodgers lead the league in home runs, slugging percentage, and home run to fly ball ratio, and rank second in ISO and fourth in doubles. Seven players are slugging .496 or higher. For the season, six everyday players have a .285 TAv or higher, while five are at .305 or better. Seven players have hit double digit home runs, led by Justin Turner (24), Corey Seager (22), and Yasmani Grandal (21). You get the idea, because if not, I have some more numbers I can toss at you. Just let me know.

If there is a silver lining for the Cubs staff it’s that they remain middle-of-the-pack in walk rate and on-base percentage, even during their recent surge, so it’s been something of boom or bust. When it comes to the Dodgers pitching, we’ll break down the starting pitchers below, and analyze their fantastic bullpen (see What to Watch for).

Since coming over from the Seattle Mariners, Montgomery has increased his fourseam usage by ten percent (38 to 48 percent) and his curve rate by about five percent (20 to 25 percent), while dramatically decreasing his sinker rate (20 percent to 4 percent). He’s getting slightly fewer ground balls and more line drives, but increased the number of swinging strikes and strikes looking. While it is a small sample size, there have been slight bumps to opponent’s power (increases in ISO and slugging percentage) and his velocity is down about a half mile per hour. The final results have been solid (2.77 ERA and 29 percent strikeout rate), but it’ll be interesting to see if Montgomery maintains this new approach.

Bud Norris, since coming over from Atlanta at the beginning of July, has compiled a 1.47 WHIP, 4.65 FIP, and averaged fewer than five innings per start. With the Dodgers, the big right-hander has reduced his fourseam usage from 48 percent to 38 percent, as batter’s have been teeing off against the pitch (.689 slugging percentage). So, why the should Cubs be wary facing Norris? Well, I’ll give you the answer to that smart and handsome question, loyal readers.  Norris is now mixing in his slider and cutter a combined 50 percent of the time (up from 36 percent combined with Atlanta), and batter’s are slugging .368. This has allowed Norris to maintain a roughly 50 percent groundball rate.

Saturday could be a difficult matchup for Hammel. This season, he’s experienced some power struggles on the road (13 home runs allowed and a .223 ISO). Four of his five worst starts of 2016 (by Game Score) have come on the road. The Dodgers meanwhile have hammered right handed pitching, ranking second in home runs, and third in slugging percentage and ISO. However, since the All-Star break, Hammel has done an exceptional job of keep his slider and sinker, his number two and three pitches, respectively, down in the zone:

As a result, batters are slugging .260 against his slider, and .212 against his sinker. He’ll likely need to continue this trend against a power-heavy Dodgers lineup.

The Cubs get their second look at Urias, after tagging him for five earned runs on nine base runners in his second career start on June 2. He surrendered three home runs the day, but opposing batter’s own just a .094 ISO since that day. Urias allows base runners in bulk (1.52 WHIP), but has escaped jams with an impressive strikeout rate (25.4 percent). He relies on his fourseam fastball (56 percent), and mixes in his secondary pitches (curve at 18 percent, slider at 14 percent, change at 12 percent) in roughly equal measure. Urias has yet to make in past the sixth inning. but he is coming off the best start of his big league career at the Cincinnati Reds (six innings pitched, ). That day he went to his slider 21 percent of the time, so don’t be surprised if he leans on it on Saturday.

Lester is looking to cap a superb August, in which he’s posted a 0.94 WHIP and held batter’s to .207/.247/.293. During the month, Lester’s increased his fourseam usage about five percent from the season’s first four months, while decreasing his cutter rate by about five percent. More significantly, Lester has jumped his two-strike fourseam usage by 12 percent (to about 52 percent), making it his go-to strikeout pitch. On June 1 against the Dodgers, Lester tossed his first and only complete game with the Cubs, allowing one earned on four base runners, while striking out 10. Fascinatingly enough, Lester threw both a season-high in fourseamers (67) and curves (17) that day. Keep that in mind (or don’t, and be surprised if he approaches those numbers again).

Kenta Maeda has reached the seventh inning in just two of his past 12 starts, and not once since July 10. Despite struggling to pitch deep into games, the right hander has been very good (3.80 DRA and 1.10 WHIP). The Cubs should be especially loathe to send right handed batters to the plate, as he’s been tremendous against them (.220/.260/.334, 30 percent strikeout rate, 4 percent walk rate). Maeda goes to his fourseamer (30 percent), slider (30 percent), and curve (19 percent), but the slider usage increases to 43 percent both in two-strike counts and against right handers.

The late-innings. Clayton Kershaw may be sidelined and it took awhile for Rich Hill to make his first Dodgers appearance, but the bullpen has been dominant. Among NL teams, only the Reds bullpen has thrown more innings. The Dodgers relievers have been worked, but they have produced. They rank first in walk rate, contact rate, and WHIP, and second in FIP, strikeout rate, and stranded rate.

Kenley Jansen, their All-Star closer, owns a 0.69 WHIP and 39 percent strikeout rate. He relies chiefly on a vicious 94-MPH cutter (86 percent usage rate), that is particularly devastating against right handed hitter (.198 slugging percentage). In two-strike counts, he’ll mix in  a slider and curve, to great effect.

Joe Blanton has been something of a revelation as the eighth inning bridge to Jansen. He’s yet to surrender an earned run in 11 August appearances, and on the season, he owns a 0.90 WHIP. Blanton’s prolonged time as a starter means he can be counted on for more than one inning, and of his 61 appearances, 13 have been for more than three outs. Blanton’s move to the bullpen has allowed him to increase his fastball velocity by four miles per hour from 2014 (87 to 91). He’s also jumped his slider usage from 16 to 38 percent, making it his primary pitch, and batter’s are slugging .280. With two strikes, Blanton’s slider usage jumps to 58 percent.

One weekend. Three separate broadcast channels. Three different start times. No rules (except for all the rules associated with the FCC and the game of baseball). The series kicks off Friday night on ABC 7, with the first pitch scheduled for 9:10 PM. Saturday’s game starts at 3:05 PM, and can be seen on WGN. The finale is a Sunday afternoon affair, with a 3:100 PM start time, and will be carried both locally (CSN) and nationally (TBS). Enjoy the games!

Tags: Los Angeles Dodgers, Series Preview |
Andrew Felper
Follow @@AndrewFelper
Andrew is a contributing writer to Baseball Prospectus, SB Nation, and Sox From the Couch. A graduate of Boston University, he resides in Massachusetts with his wife, their two cats, and unwatched box sets of Deadwood, Band of Brothers, and the final two seasons of Treme.
read more from Andrew Felper