With the birth of statistics in baseball giving us a more accurate gauge of player talent, the eye test (note: this is not the same as scouting, which is still vitally important) has become a thing of the past, a relic for which we only use to pique our interest before looking to statistics to provide context to what our eyes may have suspected.

When it comes to the long awaited and triumphant return of notorious Cubs slugger Jorge Soler from the DL after a hamstring strain, the eye test does more than pique our interest. At the plate, Soler has been nothing but magnificent since his return. Though the sample size is small, barely a month worth of baseball, the Cubs have seen Soler essentially become the player that everyone sought for him to become—a strong, tall, force at the plate who exploits his power nearly every time he steps into the batter’s box.

Since his return from the DL in the month of August, Soler has put up a healthy line of .305/.373/.610, with an ISO of .305. For some perspective, during the month of May (Soler’s last full month of play) he batted .210/.310/.403 with an ISO of .194. That’s quite the improvement, and the fact of the matter is it’s not as though the numbers that Soler is posting in August, small sample size taken into consideration and all, is such a tough bar for a player like him to clear. This is somewhere around what his true talent level was more or less expected to be.

Perhaps Soler’s early season struggles were weather related, as the rumors always circulated that Soler wouldn’t truly be able to tap into his power in the bitter and chilly early season nights at Wrigley Field. Soler played though some warm weather before his DL stint though, even if it wasn’t a bounty of it, and still struggled, indicating that that’s likely not so much a plausible explanation for his recent success as much as it is a tiny variable in a bigger picture.

The biggest change that Soler has implemented since his return to action in August is his place discipline. It’s as if Soler is a totally different person at the plate these days. Take a look at the difference between Soler’s numbers from before his DL stint and after:

Soler’s swing percentage has virtually stayed the same, going from 45.6 percent before his DL stint to 45.9 after, but his contact rate has increased by almost 6 percent. Soler is swinging with the same frequency he always has this year, but he’s making contact much more often, and it’s turning into meaningful contact.

Soler is hitting more pitches in the zone, while actually lowering the percentage of swings at the pitches he’s seeing in the zone. He’s essentially done the same with pitches outside the zone, swinging at them at less than a one percent increase, while making contact on these pitches 2.3 percent more often. Soler has decreased his swinging strike percentage as well, indicating that he has a better eye for the pitches that he’s seeing.

This isn’t exactly rocket science, Cubs manager has noticed the change as well. “That’s why the ball is being struck as well as it is,” Maddon said of Soler’s recent success. “He’s really staying in the zone. He’s been very patient.”

“That’s something [the coaching staff] promotes with him all the time. With all of our hitters, but with him it’s really obvious that in the zone, when he’s not permitting the pitcher to expand, he’s really good.” Maddon continued.

Soler has been tapping into his raw power at the plate, too. Soler currently has an average exit velocity of 91.1 mph, putting him among hitters such as Victor Martinez, Corey Seager, Robinson Cano and Manny Machado, whose average exit velocities all sit between 91.0 and 91.2 mph. Not bad company to be amongst.

Soler has improved his plate coverage when it comes to that power, too. Check out Soler’s ISO zone maps from April – June on the left, and August on the right (keep in mind, the sample size on the right is only half the size of the sample on the left): 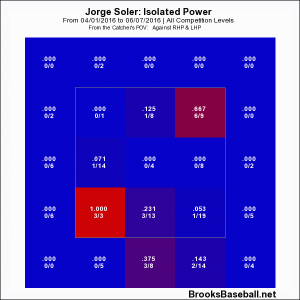 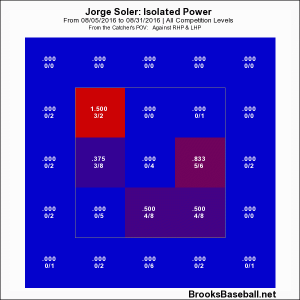 The success that Soler is seeing couldn’t have come at a better time, as the Cubs are poised to make their run into October with a momentum that has stayed with them throughout the entire season.

“He just makes our lineup that much deeper,” catcher David Ross said of Soler. “When he was out, from a catcher’s standpoint, you can see the lineup shortening. You see that if you can get past a guy, it gets a little easier. When Jorge is in there, it just makes it a really deep lineup.”

Soler is simply becoming the presence in the lineup that baseball has always expected him to be, and that those who believed in his true potential knew would eventually surface with a bit of work. Soler’s ability to slow down at the plate is what will help him maximize the his talent and power that the Cubs have always known was there, but Soler just wasn’t able to hone it on yet.

The center of trade talks just a few weeks ago, Soler has now become a center piece of Cubs baseball, his rightful place. If Soler can continue this hot streak, he will become an additional power bat in this already stacked Cubs lineup for years to come, and all it took was a little patience.

Tags: Jorge Soler, Patience |
Cat Garcia
Follow @TheBaseballGirl
Cat Garcia is a freelance baseball writer from Chicago. When she is not writing or reading about baseball, she can be found at her place of employment, located at 1060 W. Addison Street.
read more from Cat Garcia