Ben Zobrist
Position: Second base, occasional corner outfield
2016 Stats: .272/.386/.446, .306 TAv, 18 HR, 96 BB, 82 K, 631 PA, -9.4 FRAA, 4.1 WARP
Year in Review: The Cubs front office had made it vehemently clear that in 2016 they desired a lineup with a strong, patient plate approach. It was almost hidden between the lines in some Billy Beane-esque fashion that they didn’t care how hitters got on base, whether it be via contact or walks, and in the case of Anthony Rizzo even hit by pitches are welcomed — they wanted men on base, and the speed to match. Enter Ben Zobrist, whose patient plate approach is not only the hallmark of his skill set that also includes bounding speed and a contact-heavy approach, but this year Zobrist had the second highest OBP on the team just behind lead-off man Dexter Fowler, and the walk rate to match.
Zobrist brought with him everything that the Cubs signed him for. He was the total package and then some. He was a leader, a hero in the postseason, he brought quality and consistent contact hitting to the lineup, he took walks at the highest clip of his career since 2009 and the highest clip of the Cubs lineup in 2016 at 15.2 percent, and he struck out at the lowest clip of any Cub with a minimum 200 plate appearances. April saw Zobrist excel and be who the Cubs wanted him to be, May saw Zobrist reach a bar that possibly even Zobrist himself at the age of 35 didn’t think he could reach, and even when he slumped in July, hitting just .212/.316/.388, he managed to keep his OBP near league average.
On the defensive spectrum, FRAA was not an advocate of the 35-year old Zobrist’s defense, but he isn’t Jason Heyward. Though saying “The Cubs didn’t sign him for his glove” doesn’t excuse the poor marks, it certainly isn’t something that should tarnish a campaign as sparkling as Zobrist’s 2016 was. Take the bitter with the better.
So what exactly was it that was behind the spike in Zobrist’s walk rate? He posted his highest walk rate and OBP since 2009 with the Rays this past season, and though the wheels don’t offer up the opportunity for as many stolen bases as even just two years ago, Zobrist has managed to gracefully shift focus from one aspect of his game to another. If he can’t steal bases or use his bounding speed to outrun a ball to first, he’s decided he’ll just get on base via walks instead. What a brilliant idea! Zobrist saw a uptick in the amount of breaking pitches he saw in 2016, specifically a 2.8 percentage point increase in sliders and a 1.7 percentage point increase in curveballs. It’s a small increase, but when you think about how well Zobrist lays off pitches that are outside the zone it’ll leave you wonder why there wasn’t a decrease in breaking pitches Zobrist saw (especially when it’s been noted that Zobrist is notoriously better at hitting breaking and slower pitches than fastballs).
Perhaps this was NL pitchers’ way of combating the fact that they hadn’t yet figured out what Zobrist’s approach is like, perhaps figuring they could fool him on well placed pitches with a ton of movement. Wrong. Zobrist stated in early 2016 that he was seeing the ball better than he had before, wasn’t offering at pitches down or anything not to his liking, and in tandem with that, he’s dropped his outside the zone contact rate by 3.5 percentage points in 2016. Also, check out Zobrist’s swing maps on sliders and curveballs from 2015, and then from 2016. 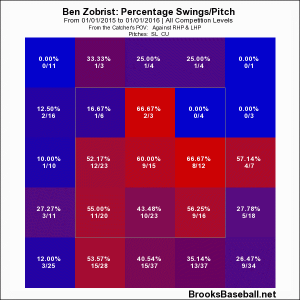 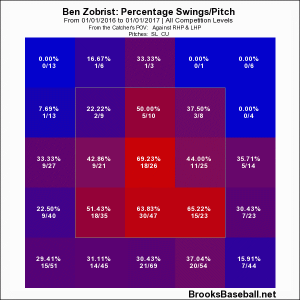 It’s very obviously a much more neat and tailored approach. Zobrist has exploited not only his aging profile to his benefit, but pitchers approach against him as well, and the results show that though Zobrist is pushing the end of his mid 30s, a time when one of his most valuable skills is set to decline, he hasn’t skipped a beat.
Looking Ahead: Though I’ve praised Zobrist for his graceful aging which as held nearly no restrains on his production, Zobrist is creeping up there and he can’t ward off father time forever. Zobrist will be 36 next season, and while we have seen his speed decrease and a slight ding in the profile of his defense, that could be a downward spiral for him in the future.
Zobrist has three more seasons left on his contract, two in which he is owed 16.5 million, and in his final year (his age 38 season) he will be paid just 12.5 million. The contract structure allows for the Cubs to capitalize on what could potentially be the last few good seasons Zobrist has left in him before ushering in a new era during Zobrist’s final season without having to admit to highway robbery. But as far as 2017 goes, I don’t think there is a ton to worry about.
As I stated before, Zobrist is seamlessly transcending his skill sets to accommodate his aging profile offensively, and in ways he’s even improving upon himself. The idea of Zobrist continuing to have as much success in 2017 as he did in 2016 is not all that crazy, after all even should Zobrist regress a bit, his steady career totals are sufficient enough of a landing pad for him, and  led the Cubs to sign him to a four year deal. Injury is certainly a concern, but Zobrist has been extremely healthy for the extent of his career, so that needn’t be something to concern yourself with now.
Zobrist will likely continue to produce like the well oiled machine he is in 2017, and right now, that’s all Cubs fans should be concerned about. After all, Zobrist probably hasn’t even had time to polish off his World Series MVP trophy from 2016 yet.
Lead photo courtesy of Ken Blaze—USA Today Sports
Tags: 2016 Offseason, Ben Zobrist, Player Profiles |
Cat Garcia
Follow @TheBaseballGirl
Cat Garcia is a freelance baseball writer from Chicago. When she is not writing or reading about baseball, she can be found at her place of employment, located at 1060 W. Addison Street.
read more from Cat Garcia