Year in Review: If you’d like to, you can find things that are wrong with Addison Russell. He hit only .238 this year, and .242 the year before. His release is quick, his throws are accurate, but his arm isn’t particularly strong. He strikes out a little more often than you might like for a middle of the order hitter (22.6 percent of the time this year). He still hasn’t really started hitting well against lefties (.194 average in his career), though he did have nine homers against them this year. He hits .222 against breaking pitches, and slugs only .353 against them.

But then you start running out of ideas, and you see a career spray chart that is almost blindingly beautiful: And you look at Russell’s age, and realize that the Cubs have a 22-year-old All-Star shortstop who just had a 4.3 season by bWAR (something that has only happened 27 other times), and a 3.9 win season by WARP. You realize that he now has nearly two full seasons of MLB experience already under his belt at the age when Kris Bryant was just making his debut. And then you realize how quickly you ran out of ideas for Russell’s shortcomings and that most of the stats he struggles in relate only to batting average.

Much like his play at shortstop, Russell’s 2016 went so smoothly that sometimes you had to pinch yourself to remind yourself that it was happening. That’s largely because, since the Cubs acquired him in 2014, his progression has seemed almost linear. He just keeps incrementally improving, and it just gets harder and harder to find any one thing that he is bad at.

In 2016, Russell had the type of season that suggests that he is a budding superstar. He improved his strikeout rate from 28.5 percent in 2015 to 22.6 percent this year. He hit 21 homers, eight more than he did in 2015. He improved his walk rate from eight to nine percent. He improved his slugging from .389 to .417. He was more consistent in the field. And he delivered important hits from the very beginning of the season until the very end:

Looking Ahead: The most alluring part of the Addison Russell experience is the possibility, maybe even probability, that this sort of improvement can and will continue. So, because he won’t hit as many homers as Bryant, and because he won’t throw any no-hitters, and because he (probably) won’t make as many spectacular plays as Javy Baez, we should take extra care to appreciate how special a player Russell is. When Billy Beane traded Russell to the Cubs, he famously compared him to Barry Larkin, and so far, there’s no reason to doubt the comparison. And at that point in his career, Larkin had just 169 plate appearances under his belt.

Of the weaknesses I mentioned, there is reason to think that Russell will get better at each. He had a .277 BABIP this year, which is low for somebody with an average exit velocity of 88.2 mph (which is around league average). This alone suggests that his batting average will likely get better in the future, especially if he keeps reducing his strikeout rate. Here, via Fangraphs, is Russell’s rolling 15 game strikeout rate this year; the adjustment he made and then kept up is as clear as day. 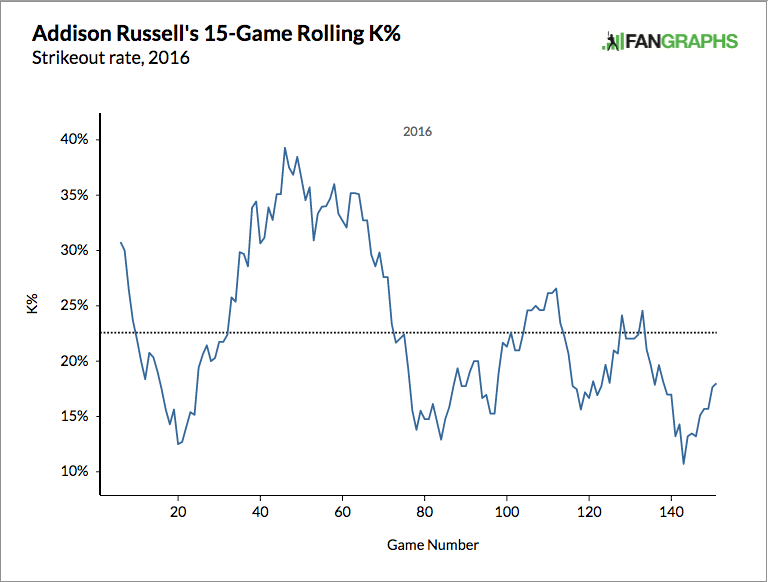 This ability to make adjustments will serve Russell well. There is simply no way, for example, that he will continue to struggle as much as he has against lefties; he will likely eventually hit them even better than he does righties. He already improved this skill from 2015 to 2016 as well. The more breaking pitches he sees, the better he’ll hit them. It wouldn’t be surprising to see someone as strong as Russell continue to add power; 30 home runs in a season seems totally within the realm of possibility. Maybe his arm won’t get stronger at shortstop, but he’s already shown more than enough quickness and smoothness to get away with it; right now, he’s already an above-average MLB shortstop defensively.

With the trajectory seemingly headed so firmly in the right direction, it makes lots of sense that the Cubs would want to discuss extending their young shortstop, and it also makes sense that Scott Boras (Russell’s agent) will try to get every dollar he can out of Russell’s budding superstardom. This will be an interesting discussion that might take place over this offseason and next; the pre-arbitration status that Russell still has pays out only a little more than $500k next year.

It’s possible that the Cubs have a shortstop who could be an All-Star for the next ten years, and it’s possible that when all is said and done, Russell will be not just an important piece, but in the debate with Bryant as the best  Cubs player of this era. But we have to actively watch for this, because otherwise Russell is so smooth that we might not even notice.

Tags: Addison Russell, Player Profile |
Nate Greabe
Follow @ngreabe
Nate is a baseball lover from New Hampshire, where he grew up a Red Sox fan by geography and a Cubs fan by his Chicagoan father. He just finished his degree and now lives in Austin, which is weird.
read more from Nate Greabe