It goes without saying at this point that Kris Bryant’s sophomore campaign was a remarkable one, and in several different respects. He built on a historic rookie season by not only improving his first-year statistics, but blowing away his output in almost every single regard despite notching only 49 more plate appearances than the previous season.

While there were players across the league who performed better in individual categories, nobody represented excellence within the total body of work more than Bryant. His WARP topped the league at 8.99, outperforming even Mike Trout. When you turn in the type of season that Bryant did, statistically, while winning a National League MVP award, and tossing to first for the final out of his team’s first world championship in over a century, how can you possibly expect to build on it? Well, Bryant already has some ideas, which we’ll touch on in a moment.

The following illustrates that significant improvement across the board for Bryant:

That’s, uh, wow. It’s one thing to acknowledge that Bryant was better in his second season than his first, but it’s another thing to stack those two campaigns together like that. He improved in every category presented here, with the exception of his walk rate. But the overall fluctuation in that statistic barely culminated in a one percent decrease. You’ll absolutely take that in conjunction with an eight percent decrease in his strikeout rate, among the countless other respects in which he demonstrated improvement.

Part of that is the product of a season to adjust to the big league level, while another part of it comes as the result of the swing adjustments he was able to make in the 2015-16 offseason. Bryant notably leveled out his swing in hopes of generating more overall contact. And that was exactly the result.

FanGraphs had Bryant driving up his overall hard contact rate up about three percent (to 40.3), with his LD% experiencing the same type of result (23.7 percent was almost a full three percent increase from 2015). But the real notable change came in his overall ability to make contact. In maintaining a swing rate almost identical to that of the previous season (49.0 vs. 48.8), Bryant was able to take those adjustments and turn it into a seven percent increase in his Contact% (all figures coming courtesy of FanGraphs):

He didn’t experience a tremendous change in his approach toward any specific pitch types. Brooks Baseball had him at about a two percent increase against hard stuff, a four percent decrease against breaking pitches, and pretty constant against off speed. Nonetheless, this illustration of his whiff rate is certainly encouraging: 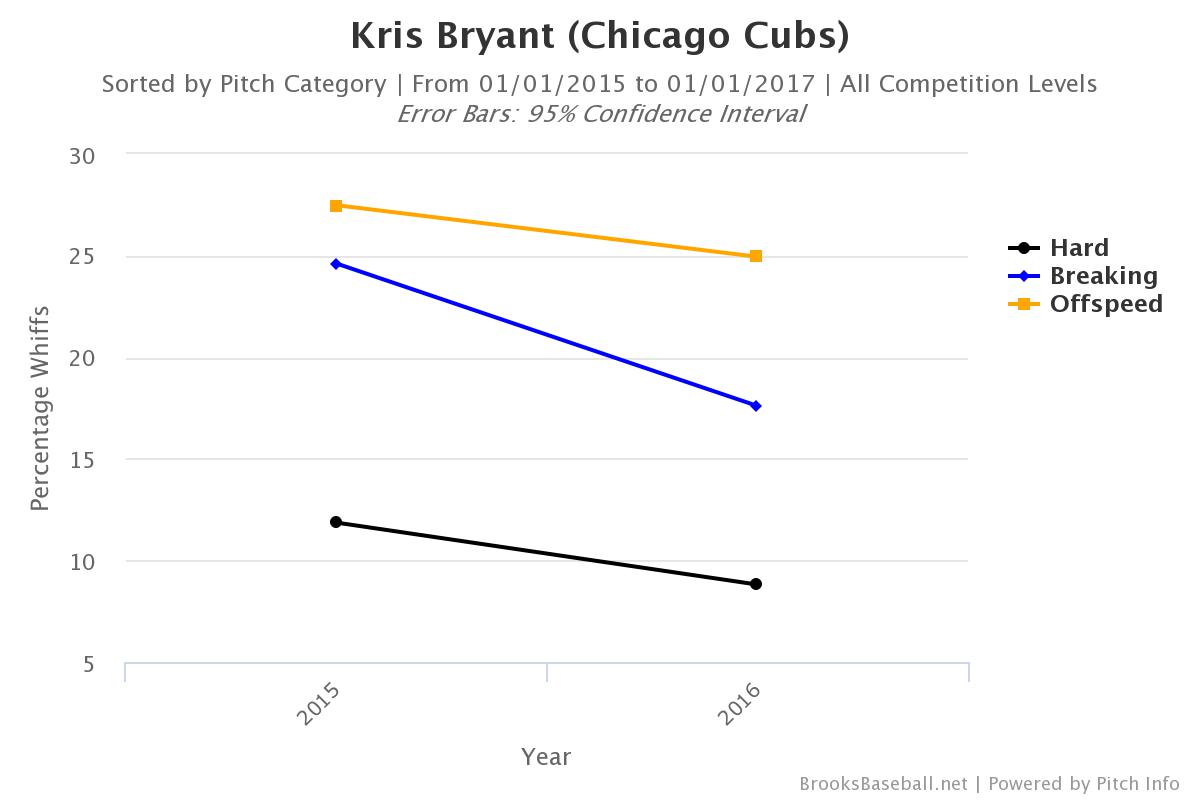 Obviously we’re only talking about two years of sample size, but it’s a steady decrease across the board. So Bryant was able cut down on his strikeout rate and increase his overall contact rate in a number of ways. That all culminated in him becoming an offensive threat in nearly every respect. He’s not just a power guy, but one that can beat you with overall hard contact. And heading into 2017, he’s already established that he’d like to add another element to that arsenal: opposite field. 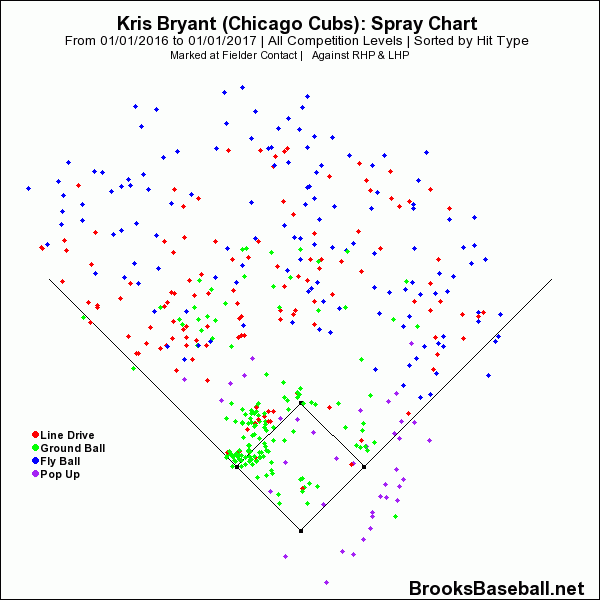 As such, he faced the shift on a much more consistent basis throughout the 2016 campaign. And that spray chart above doesn’t indicate much deep contact to the opposite side of the park. Bryant doesn’t have many limitations, but that lack of ability to hit to the opposite field certainly represents one. It’s an element of his game that he’s aiming to improve in the upcoming campaign, but how exactly can he go about doing it?

For Bryant, the explanation is really quite simple. Pitchers know where he’s showcased a lot of his power from in the strikezone: 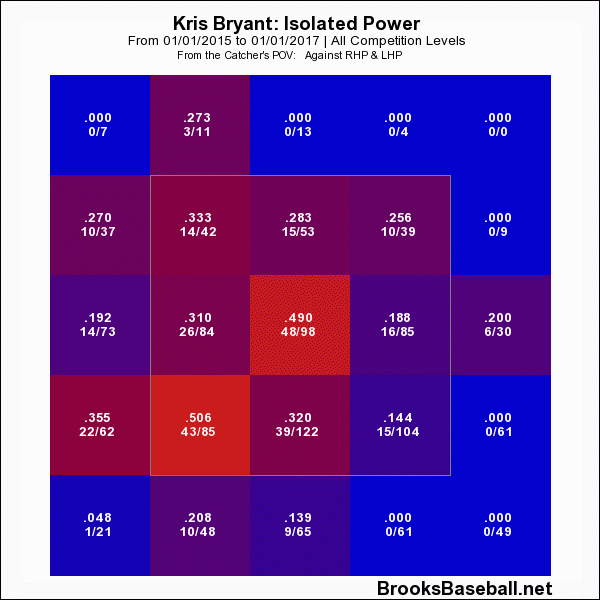 KB loves him some inside stuff. And despite a visible effort from opposing pitchers to get him low and away, he’s feasted on that inside stuff. It’s resulted in a multitude of pulled contact, obviously, but it’s likely going to lead pitchers to try and start getting him more away overall. This is a sentiment acknowledged by Bryant, and it should feed right into his desire to start getting the ball to the opposite field with more regularity.

The fact that Bryant had such a stellar sophomore campaign, but still demonstrates areas of potential growth, is part of what makes him such an intriguing entity to study. It goes far beyond “Yes, this is a good player and the numbers support that.” That’s true in most respects, certainly, but when you look at the shortcomings that are potentially presented by that lack of ability to go to the opposite field, you realize how much more of a threat Bryant could become by re-developing his ability to hit that direction. This will provide intrigue for us in the upcoming year not only in Kris Bryant’s approach in trying to do so, but how opposing pitchers react and attempt to pitch to him.

It’s already a difficult enough task for them.

Uh oh. Claiming Kris “leveled out his swing” will infuriate his father Mike. In his interview with Cubs Insider, he explicitly describes the changes made from minor to 2015 and in off-season last year.

Here is an excerpt:

Mike Bryant: Yeah, over the last year there’s been a lot of…I don’t want to say “hype” or anything, but everybody’s talking about Kris’s swing changes and it was all coming out different. Like when they say “leveling out of Kris’s swing.” He’s not leveling out the swing. People, they go, “See, the Cubs are fixing him. Bryant’s dad screwed him up.”

This is the way they operate out here in Vegas. People in the know, know better. Let me tell you the basic change we made from his rookie year to last year. It was really simple: We worked really hard in the offseason at this. I use Zepp analytics, which measures pretty much all the angles in the swing.

What it measures, it has a 3D swing plane and it has two lines. It shows you a hand path and a barrel path and then it puts numbers to it — bat speed, time to impact, hand speed — and it’ll show you the vertical angle on the bat and the attack angle on the bat. The vertical angle, if you can visualize, if you hold the bad straight across the plate in front of you that would be zero and then if you point it straight down at the ground that would be 90.

When you’re measuring it through the zone it measures the vertical angle on the bat and if it’s too steep, you don’t have plate coverage. That number — most of the guys will operate with a good vertical angle so you don’t have the barrel above your hands — the barrel wants to be below your hands as it’s coming through the zone, so you have a positive angle. Most guys operate about 20 to 25. You look at guys like (Giancarlo) Stanton, he’s a little bit more flat. A guy like (Mike) Trout is a little bit more steep.

While hd didn’t go the opposite way much, I don’t think that means he can’t. You take what you are given, and he got lots of inside stuff, more so than his rookie year.

He actually might have scary power to the right part of the field and pitchers didn’t want to deal with that. I bring that up because he hit 27 of his 42 homers to the opposite side in AAA. So like pitchers can’t get him out inside and he probably can spank pitches on the outside portion of the plate consistently, too. What do pitchers do now?