In the 2017 World Baseball Classic, Javier Baez looked unstoppable on the basepaths, and a hyper-aggressive Baez is one of the most exciting things to watch. After stealing second and third in the sixth inning of Puerto Rico’s 6-5 win over the USA, the Cubs infielder danced down the line as if he were going to steal home, too. And he seemed like he could do it. After all, he did it in the NLCS last year against the Dodgers.

Baez, who swiped 12 bases last year, is a threat to steal, but he’s never been a sure a thing in that regard. At least, not until the WBC. In eight games, Baez stole four bases. Not only that, three of those came in the same game against Buster Posey, who threw out 37 percent of would-be base stealers in 2016. In those eight games, Baez got on base as the lead runner eight times, giving him eight opportunities to steal, and he ran in half of them. In at least one of the instances where Baez was the lead runner, the next pitch was put in play advancing him to third. It seemed like if Baez got on base, he was going to go.

As such, Baez has built a reputation as being an excellent baserunner, primarily through his exploits in the postseason last year and most recently the WBC.

But the numbers tell a different story. 2016 saw him put up negative baserunning value for the second straight season. Here are his advancement runs from last season:

Baez did fine advancing on ground balls and stole efficiently enough to be average. Where he struggled was advancing on fly balls and advancing on hits. Of course, baserunning metrics, like defensive metrics, aren’t perfect and don’t account for things like stretching a single into a double or a double into a triple. But it’s concerning that Baez, who more than passes the eyeball test, is middling about with the likes of Adam Lind and Yasmany Tomas.

Some of the best Baez baserunning highlights include one thing that isn’t under his control: the defense screwing up. Even in the WBC, where Baez looked untouchable, he benefited from a lot of luck. The poor baserunning numbers make more sense when we look at plays where Baez doesn’t get lucky, like this one from a game last July.

The stop sign was put up before Baez got to third and he ran straight through it. By the time the catcher had the ball, Baez was just barely in the frame.

The results from the WBC say Baez had a great tournament, but the good Baez and the bad Baez ran the bases as seen in this Statcast break down on two of his three steals against Buster Posey and Team USA.

The steal of second, like his first steal earlier in the game, was off the pitcher, Michael Givens. To put Baez’s 27-foot secondary lead into perspective, the average on successful steal attempts last year was 23 feet. Baez’s lead was enormous and Posey knew it. Look at him blatantly indicating to throw to first. 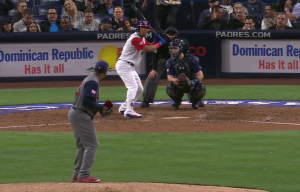 But Givens ignored him and Baez took second easily. This isn’t to discredit Baez in this situation. If he finds himself in a situation where the pitcher isn’t looking him back, he should definitely go. Here is where Baez’s aggressiveness pays off. There is a definite lapse in the defense that he can exploit. The steal of third, though, Baez got a little lucky. It’s not often that Posey makes an errant throw. The play was a double steal, so if Posey had made an accurate throw to get him out, it wouldn’t have been Baez’s fault. But it appears his successful swipe of third emboldened him for later in the series.

I would bet that every major league infielder saw that play and is going to anticipate Baez trying to “Baez” his way out of a sure out. Baez probably won’t make another play like that for the rest of his career. And it feels like a bit of a waste to burn that move in that situation. Puerto Rico had two runners on with 1 out. Baez was already in scoring position, so the risk to steal third was only to give him a chance on a sacrifice fly or a wild pitch. This wasn’t a double steal; Baez left on his own. Not to mention he nearly got back-picked on the failed bunt attempt the batter before, but was saved by an early call of time.

Don’t get me wrong. I’m glad Baez attempted the steal, because it gave us that slide, but that doesn’t mean it was wise to go in that spot.

The same could be said of his steal of home in last year’s NLCS.

First, Baez made it to second on a hustle-double and he deserves credit for running hard on the Texas Leaguer and taking his opportunity. Again, that’s the sort of thing that doesn’t get factored into baserunning runs. He, then, advanced to third on a wild pitch, but Billy Butler could have done it if he stopped halfway for an actual country breakfast. Then, there’s the steal of home. First, Baez got himself hung up on the failed safety squeeze, which is a knock against him. But he redeems himself by inducing a throw from Carlos Ruiz by faking back to third before taking off for the plate. If Ruiz had held onto the ball long enough for Baez to commit to a base like he was supposed to, Baez would have been out by a ton. It’s hard to say who deserves the credit/blame for that steal. The juke from Baez is convincing enough, but he was also far enough off the bag that Ruiz could have waited for him to take a step before throwing.

But don’t those plays feel like only Baez could have pulled it off? Who else but Baez could have the body control to flinch a throw behind him or avoid a tag like that? Perhaps, this is why it’s so frustrating that he can be a negative asset on the basepaths when the eyeball test says he should more than make up for not having blazing speed. If Baez can keep the aggressiveness while reigning in his recklessness, he could be even better. Of course, that’s easier said than done.