Coming into the 2017 season, one of the many reasons to be optimistic was getting a full season of catcher Willson Contreras. The 24-year-old backstop burst onto the scene in 2016, solidifying himself as the Cubs every day catcher in the second half of the season. He was not only better with the glove than some expected (he sported a 3.6 FRAA in addition to his rocket arm), but he was also a huge contributor at the plate. In 283 plate appearances, he posted a TAv of .302, which would have placed him 2nd among all MLB catchers if he had enough plate appearances to qualify.

However, 2017 has not started like Contreras and Cubs fans had hoped. He has still been good behind the plate, but the TAv has dropped from .302 last year to just .260 this year. It’s still early in the season and samples are still small, so sometimes it’s hard to conclude too much from the stats. The first two places to see if the lull could be luck related are BABIP and HR/FB%. Contereras’ BABIP sits at .313, which is completely normal. It was at .339 last year, which was probably a tad high, but definitely no bad luck for him so far in the balls in play department. The second number is HR/FB%. This is simply the number of fly balls that are hit that end up going for home runs. Contreras sits at 13.3%, which again is completely normal, though down from his probably unsustainable number from last year of 23.5%. So upon quick glance it doesn’t appear that Contreras is experiencing any bad luck.

Looking through the numbers, I have identified three things that could be leading to the dip in the overall numbers for Contreras. Not one single thing is the main culprit, but likely rather a combination of the group. The three things are the amount of contact he’s making, the direction in which he’s hitting the ball and how hard he is hitting the ball. I’ll go into a little more detail on each of these below. 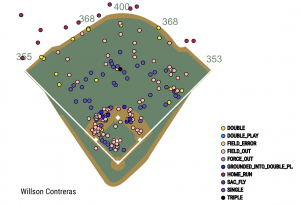 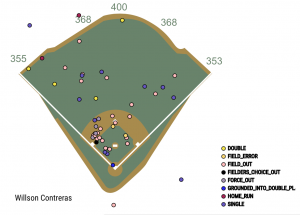 As you can see, even with the small amount of data in 2017, Contreras is not using the whole field. This is especially evident when he hits the ball into the outfield. Because he’s a guy who has power to all fields, it’s important for him to get back to that all fields approach. He’s not a guy who has to get pull happy to tap into his power, so if he starts to drive the ball the other way, you might see him get hot again.

The final piece to the puzzle is the quality of contact he’s making and the angle at which it’s coming off the bat. To look at it from a higher level, he’s simply making less hard contact and more soft contact. In 2016 his hard contact% was 32.3 percent while his soft contact% was 17.7 percent. In 2017 those numbers have gone in opposite directions, with his hard contact% down to 28 and his soft contact% up to 22. To dig a little deeper into those numbers, his average exit velocity is 84.3 mph, down from 87.5 mph last year. It doesn’t take a rocket scientist to know that harder contact is generally a good thing. Rob Arthur outlines this well in this article. Exit velocity bottoms out in terms of expected runs added at about 82-83 mph and then increases as the exit velocity increases.

In addition to just the quality of contact, the launch angle of Contreras’ balls in play is also down. In 2016 his average launch angle was 5.9 degrees, but that number is down to 5.2 degrees in 2017. As for the ideal launch angle, that number is somewhere around 25 degrees. As you can imagine, the closer Contreras can climb to that number (He’ll never even get close in terms of average), the better off he will be. Here’s a look at his launch angle charts: 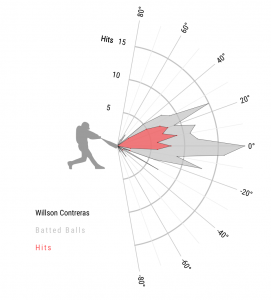 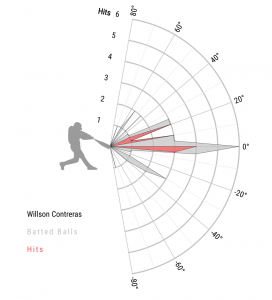 All in all, while Contreras has struggled here in the first month of 2017, I’m not overly worried. Baseball is a game of adjustments and Willson is an extremely smart and instinctual player. I trust him to make the adjustments necessary to bounce back, but the three areas I highlighted  are a great way for him to do so. Now it’s much easier said than done, especially as I sit on my couch typing on my laptop, but I believe he (along with hitting coaches John Mallee and Eric Hinske) can make the necessary tweaks to get these numbers trending in the right direction. The future is bright for the young catcher and having Miguel Montero performing the way that he is certainly takes a little bit of the pressure off in the immediate future.