It’s easy to understand why people with North Side loyalties are conflicted when broaching the subject of Jason Heyward. On one hand, it’s easy to get excited about everything he does well offensively because there was such limited success on that side in 2016. On the other, there’s the snakebitten element of him, as seemingly every success brought optimism that fed only to more disappointment last season. But even at this point, with those conflicted emotions in mind, it’s hard to not be excited about the early returns for the Cubs’ right fielder.

On the surface, the numbers aren’t particularly mindblowing. But when you’re coming off of the type of year that Heyward just had, which was just poor by virtually every offensive measure established, you’re going to look at every improvement as some sort of victory. Just to revisit the debacle that was Heyward’s 2016, it was a year that featured a slash of .230/.306/.325, with an OPS of .631. In a season where most of his numbers represented career lows, he posted an ISO of only .094 (the seventh lowest among 146 qualifying players) and made soft contact at the second highest rate of his career, with a Soft% of 27.0.

(Side note: It’s completely remarkable that he was able to finish outside of the negative both in WARP and in WAR while remaining ultimately useless at the plate.)

Heyward worked extremely hard over the course of the winter to refine his mechanics and get back to where he was in the years prior to 2016. I explored the early returns of those changes at the very beginning of April when the sample size of his number of plate appearance was still minuscule. With many more now added to the stat sheet, we can come to a firmer assessment of what Heyward is going to continue to be.

In a very general sense, he’s been better on almost every level despite running into his fair share of bad luck at the same time. As previously stated, the numbers in a broad sense don’t paint a complete picture of a guy undergoing a true rebound in 2017. But there’s a lot to like there, even with the relatively poor luck he’s faced throughout the year.

It’s been over 100 plate appearances since the last time I discussed Heyward, with him having notched 131 PAs on the season, which gives us a little more to work with, in terms of sample. Across those plate appearances, Heyward has gone for a .256 average and has reached base at a clip of .336. His TAv for the year is at .268, while FanGraphs has his wRC+ at 103. That ISO, which was as disappointing an element as any last year is at .171. Again, nothing to get ecstatic about, but a far cry from where he was at any point last season.

There were a lot of things that appeared to bode well for Heyward moving beyond 2016, particularly in regard to the approach and contact rates. Even in a down year, his contact rate still remained above his 78.9 percent career average, with a 82.9 percent figure in 2016. His walk rate, at 15.7 percent, and strikeout rate, at 9.1, each came in right around where he’d been in previous years. As such, the contact rate thus far in 2017 has been comparable, at 82.3 percent, while the K & BB rates, at 15.7 and 10.2 respectively, have remained consistent. The fact that elements such as these have remained so constant definitely seems to indicate that there were prevalent mechanical flaws last year that hindered him more than anything.

Not a whole lot has changed in regard to the approach, which is encouraging because that points to mechanically-based improvements for Heyward. One intriguing thing is that he appears to be swinging at hard stuff more often than he has throughout his career, as illustrated below: 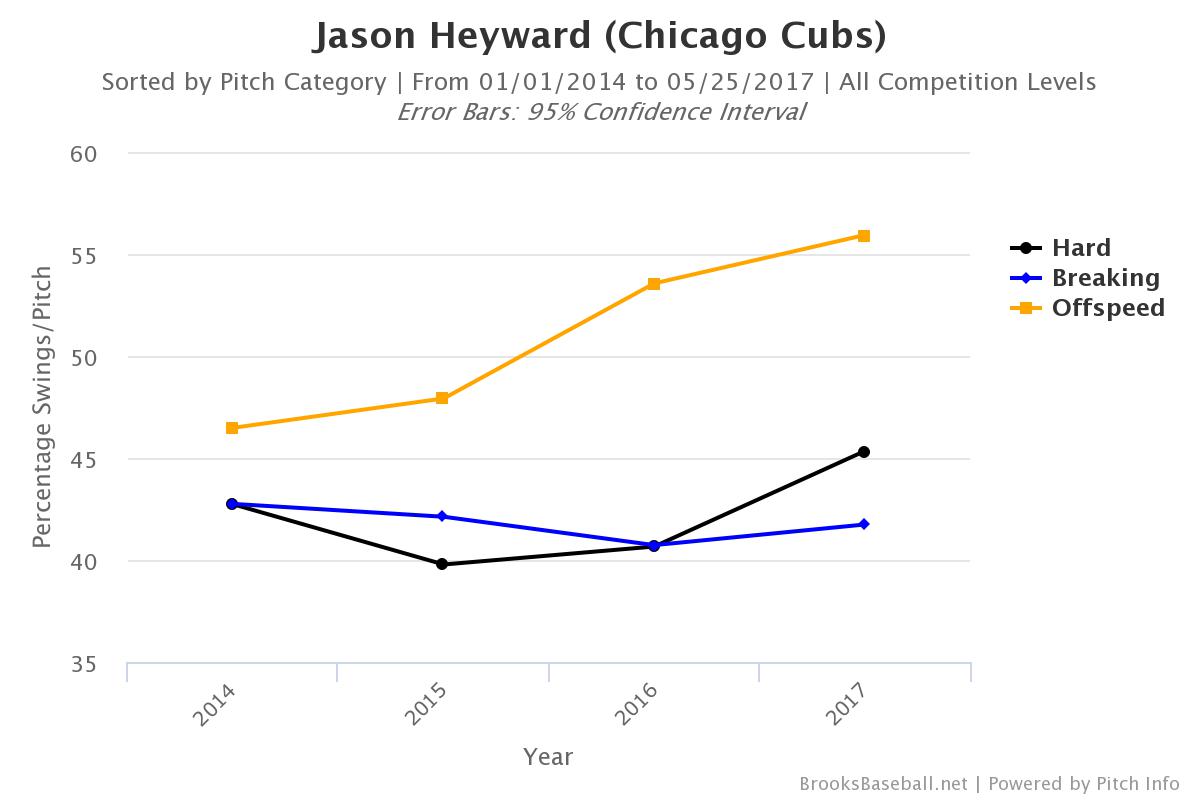 That graphic lends itself, in conjunction with some of those mechanical changes, to the harder, higher contact that we’ve seen from Heyward thus far. The increased Swing% against fastballs, when combined with the mechanical improvements have led to some pretty favorable contact trends. He’s cut that Soft% by about six percent, with FanGraphs having him at 21.5 percent. The Hard% is up a couple points, at 28 percent.

Even in demonstrating these improvements, Heyward has still faced his struggles against the BABIP monster. Even with the decrease in soft contact, Heyward has still only turned in a batting average of .281 on balls in play. That represents an increase from his .266 figure last year, but is still relatively limited overall. His groundball rate is still characteristically high, at 49.5 percent, which certainly doesn’t help. We’ve seen Heyward routinely hit the ball hard into some bad luck. He’s making contact with an exit velocity over 95 MPH 35.5 percent of the time, according to Baseball Savant. That’s an increase of just over five percent of what he averaged on the exit velocity side last year.

When it comes down to it, though, we don’t really need to sift through a whole bunch of statistics in order to note the strides that Jason Heyward has made in getting back to his pre-2016 form. This is a guy who is currently outperforming his 2016 TAv by 30 points and his 2016 ISO by over 80. He’s already at five home runs this year, whereas he hit his fifth (of seven total) at the end of July last year. He just looks more confident and comfortable at the dish. There’s a mindset there that has led him to drive the ball the other way, even with high pull tendencies. That is not an outcome that we were likely to see at any point last year. The improvements are evident, even if the results aren’t all the way there.

As noted before, that wasn’t going to be the last time we take an updated look on Heyward’s performance and neither will this. The good news? Updates thus far have been largely positive, so one hopes that that trend continues as the 2017 campaign wears on.

Tags: Jason Heyward |
Randy Holt
Follow @RandallPnkFloyd
Randy Holt is a staff writer for BP Wrigleyville. He also demonstrates what little writing talent he has on the fantasy side of Fangraphs, with a focus on third base for Rotographs. A native of Chicago, Randy is a Phoenix-area resident and a high school teacher, educating juniors and seniors on the finer points of American and British literature.
read more from Randy Holt

1 comment on “Jason Heyward Is Who We Thought He Was”

I’m too lazy to look it up, but I think the breakeven on his contract was averaging a 3.5 WAR/year or better. With his rain delay weight room results from the Series last year – I’m even willing to comp the first year regardless of production. At this rate he’s looking at a 4+WAR this year and historically – in his good offensive years – he tends to dramatically improve in June/July going forward. It’s all gravy to me as long as he does AT LEAST what he’s doing now.