Every Sunday morning from 9AM to the start of the Sunday day game the Cubs flagship radio station (670 the Score) airs a baseball show called Hit & Run. Hosted by longtime Daily Herald columnist Barry Rozner and Score producer/host Joe Ostrowski, Hit & Run serves as break from football talk this time of year when both teams are bad (without the Cubs this year the Mitch Trubisky/Super Bears Super Bowel hype train would be in full swing), and a good synopsis of what is going on with each team when the Cubs and/or Sox are good. This past Sunday Hit & Run the hosts discussed Addison Russell’s defense thus far and were shocked to learn that Russell ranked (at that time) second in all of baseball in Defensive Runs Saved (DRS). You can listen to it here, but the following two tweets sum up the conversation pretty well.

Needless to say the hosts disagreed with Russell’s nearly league leading DRS figure and contemplated who to call to explain Russell’s DRS metric with Rozner going so far as to hyperbolically (but not really since it’s sports radio and everything’s hyperbolic) ask “Does anyone watch these games?” This got me thinking about advanced defense metrics, specifically how they can be misunderstood without certain caveats. Since I watch games, and you, the reader of BP Wrigleyville, certainly watch games, I figured I could find some happy medium with Addison Russell’s elite DRS numbers by reexamining advanced defensive metrics one more time.

What Are Advanced Defensive Metrics?

Since DRS and UZR are so similar they share much of the same weaknesses: namely there are inherent biases for the stringer entering the data (i.e. hard contact could be medium contact to some) which may cause some categorizations to vary from individual stringer to individual stringer. The final advanced defensive metric tries to protect against this bias.

While DRS, UZR, and FRAA are all improvements over fielding percentage and errors, they each share the same flaw in that that are extremely susceptible to sample size. As a hitter, you’re guaranteed roughly four trips to the plate each night that can be used to judge your batting talent, but as a fielder there’s no guarantee that there is going to be even one time each night where one could separate oneself from the pack and show his true fielding talent. These fluctuations in defensive metrics caused by small sample sizes are evident when comparing the three defensive metrics (FRAA, UZR, DRS) to each other. Below, I’ve posted pairwise correlation matrices that include all qualified fielders from the preceding five-year period (2012-2016), and qualified fielders for 2017 thus far. 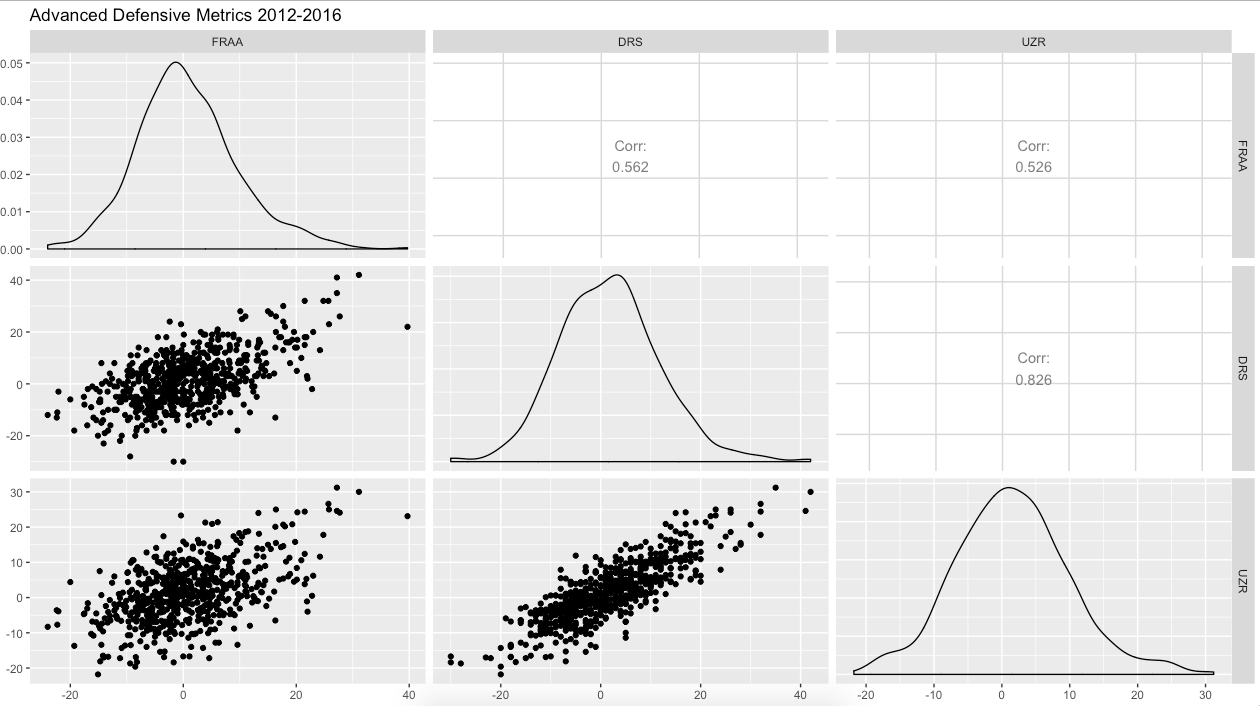 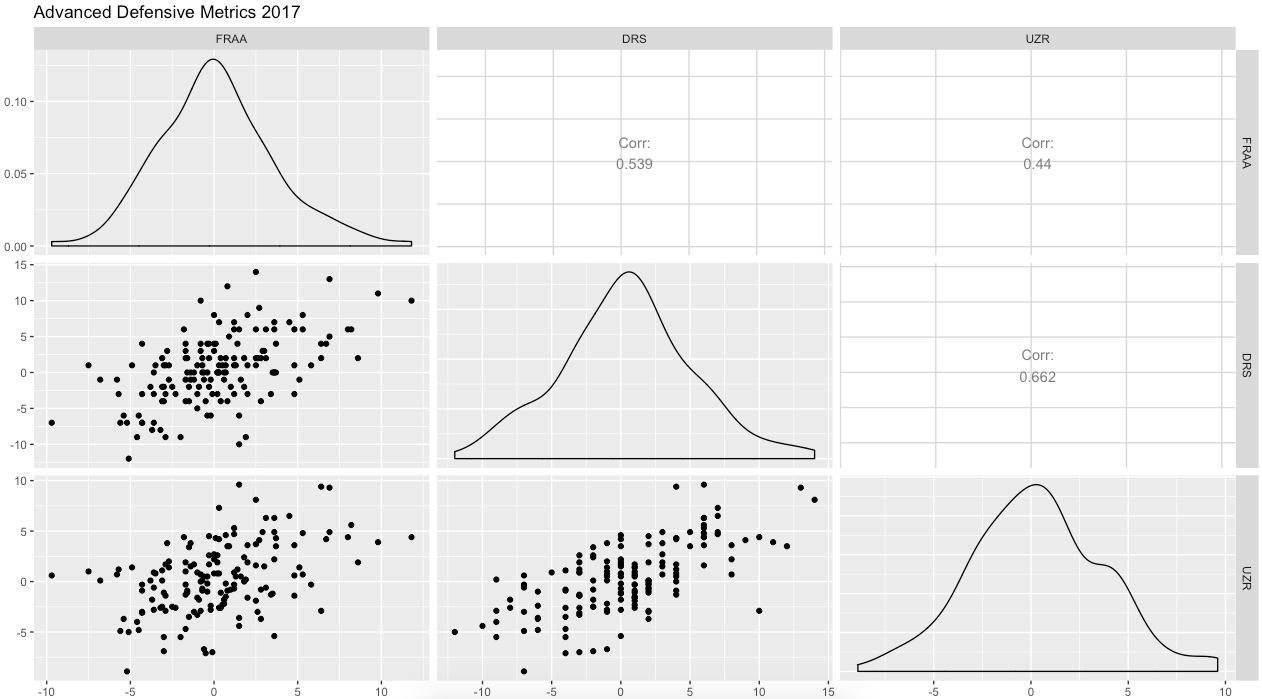 The correlation figures showing the strength in relationship between each of the three metrics decreases in 2017, when we have only a third of a season of data, compared to the 2012-2016 figures.

So how does this relate to Addison Russell? I actually agree with Rozner and Ostrowski that Russell has not looked anywhere near as good as he did last year, and there have been issues with Russell’s throws, whether because of a lingering shoulder injury, or something else only Russell knows. But when it comes to DRS and the other defensive metrics discussed above, aesthetically pleasing or not, if the fielder converts the batted ball into an out he gets the credit. This pertains to Russell specifically, because while the arm strength and accuracy hasn’t always been there, as you can see from the highlights below his range is still phenomenal.

I can’t say for sure because I’m not privy to the SIS data used to calculate DRS, but the catch along the left field line in San Diego, along with the plays that Russell made on Yangervis Solarte and Joey Votto that required him to go the right field side of second base had to have a low probability of the shortstop converting the out on those specific batted balls. And this is perhaps the curse of knowing a team as intimately as Cub fans and beat writers do. By comparing the fielding of Addison Russell or Javier Baez in 2017 to their 2016 versions and pointing out flaws, we neglect to compare these players to the overall fielding of their peers at their respective positions, where they still rank very highly.

DRS tries to accomplish this and usually does a good job, but like I said above it, like other defensive metrics, is susceptible to small sample size, so if Addison Russell really has declined in the field from last year the numbers should bare themselves out as the year goes along. For the record, while DRS has Addison Russell ranked third overall, FRAA has him ranked 64th overall, and UZR has him ranked 32nd overall, so there’s some disagreement about Russell’s performance in the field thus in the 2017 season. These differences will probably become a moot point in the next five to ten years as the Statcast catch probability system is introduced to the infield and (hopefully) allows analysts to have a true, quantifiable standard bearer for what is a great defensive play versus what is not. But, even then, you should still watch the games.

Tags: Addison Russell, defense, Defensive Efficiency |
Matt Petitt
Follow @@petitt_matt
Matt Petitt is a consultant in the financial services industry who grew up near and now resides in the Windy City. He likes to think of himself as level headed, but he once ate an entire box of Golden Grahams during a Cubs playoff season-ending loss, so it’s probably best that you decide for yourself.
read more from Matt Petitt