It seemed as though almost every contender was linked to Justin Wilson at the trade deadline, and the Cubs got him. So far it has been firmly established that he isn’t going to have a problem dancing during rain delays, so now that the important question has been answered, let’s focus entirely on the pitching side of the new acquisition.

Most Cubs fans are not likely to know much about Wilson prior to his joining the Cubs, so I’m here to tell you that he has changed in the last few years. That isn’t to say that the 29-year old hasn’t always been an effective reliever; aside from one slightly off year with the Pirates in 2014, he has been clearly above-average every year of his career. In fact, cFIP suggests that Wilson has not only been better than average in each of his major league seasons, but that he has improved every single year, improving from a cFIP of 95 in 2013 to his current mark of 76. Rather than simply honing his approach gradually to improve his results, as you might expect from this trend, the manner in which Wilson has been effective has changed dramatically since those early days.

As a rookie in 2013, Wilson produced a sparkling 2.08 ERA by way of an excellent 53 percent ground ball rate, driven by a healthy supply of sinkers and cutters. His 3.41 FIP and 3.82 xFIP suggested this wasn’t Wilson’s true talent level, but the Pirates have also pushed a ground-ball heavy, shift-focused approach for years that probably isn’t properly rewarded by ERA estimators. For years the ground balls and concurrent low home run rate characterized his success, even when the strikeouts started to tick up in subsequent seasons.

The 2017 version of Wilson has come a long way in five years. His strikeout rate has surged to a career-high rate of 34.4 percent, 20th-best amongst all pitchers with at least 30 innings pitched and a huge increase on his previous high of 27.1. That’s supported by a 14.2 percent swinging strike rate and hitters are making contact on just 72.8 percent of his pitches in the zone, the fifth-best mark in baseball. That ranks right between two other members of the Cubs bullpen, Koji Uehara (71.5) and Carl Edwards (73.1). The ground ball rate is now down to 37.6 percent, and there’s been a significant change to his pitch mix and location which is driving that.

Wilson has used an unusually diverse pitch mix for a reliever over the years, although that’s less surprising given that he started almost exclusively in the minors (including being involved in two no-hitters). 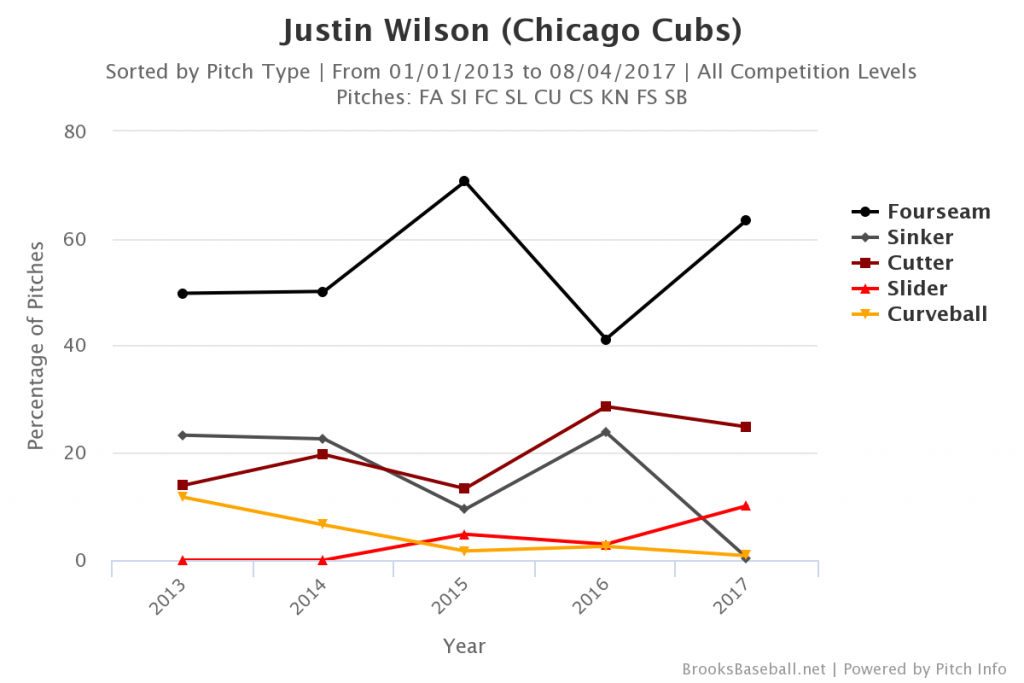 His four-seam fastball has always been a fixture, although the extent to which he’s featured it has varied dramatically, as the Brooks chart shows, ranging from just over 40 percent of the time last season to 70 in 2015. The cutter has been his second pitch since 2015, but this year it’s become much more prominent, with the sinker ditched altogether in favor of that and a slider, which Wilson is using 10 percent of the time.

The fourseam has always been a strong weapon in Wilson’s arsenal; now it has become devastating. It sits at 95 mph and Wilson can run it up to 99. It’s a high-spin offering, ranking in the top 10th percentile amongst all four-seam fastballs. Hitters are prone to swinging under it as a result, and consequently Wilson’s emphasis has shifted more and more towards locating it well up in the zone and even above it.

Wilson has never worked low in the zone very much with that fastball, but there’s been a clear move this  season towards attacking hitters in that top of the zone area as often as possible. The below chart, comparing his fourseam location in 2016 to 2017 (courtesy of Baseball Savant) demonstrates Wilson’s increased tendency to go after hitters way up in the zone, and indeed above it, with a clear (and literal) spike in his pitch frequency in that area.

With the league trending so much towards uppercut swings and increasing launch angle, Wilson’s ability to pitch effectively in this area of the strikezone is encouraging. It’s hard to uppercut a ball that’s already chest-high, and it acts in stark contrast to the sinker that used to be his second pitch.

All three of this year’s main pitches get whiffs at a steady clip, with the fastball improving each year from 2013, going from 10.8 percent to 16.6. The fourseam whiff/swing rate is incredibly high: at 38.4 percent, it’s fourth-best in baseball amongst all hitters with at least 100 fourseamers thrown, behind Dellin Betances, Craig Kimbrel, and Chad Green. When that fourseam isn’t getting whiffs, it often gets pop-ups, which constitute 22 percent of balls in play off the pitch.

The cutter is now the only significant ground ball pitch, with the sinker gone, but it can also get some swings and misses. Wilson also likes to run both fourseam and cutter in on righties, with that fourseam getting particularly good movement to that side of the plate. In this five-out save against Cleveland, the left-hander generates two ground ball double plays from inside cutters, then gets Francisco Lindor to strike out by chasing one of those trademark fourseamers above the zone.

Wilson also displays the uncommon reverse platoon split: lefties have a .249 TAv against him over the course of his career, compared to .224 for righties, and the split was even more stark in 2016, .266/.227. The strikeout-walk numbers don’t suggest that should be the case, yet lefties have hit Wilson harder and have a significantly higher line drive rate over the course of his career: 22.9 percent compared to 16.3 for right-handed hitters.

That is where the slider is coming in this year. In contrast to his predominantly fourseam-cutter approach to righties, Wilson uses the slider almost as often as the cutter against lefties, having thrown it in 17.6 percent of plate appearances against southpaws this year, compared to 19 for the cutter. When he gets ahead in the count, the slider usage jumps up to 27 percent. It doesn’t have a particularly impressive amount of movement, but Wilson has been good at locating it almost exclusively low and away, and it seems to be working based on a very limited sample: only two left-handed hitters have recorded a hit in ten at-bats ending with the slider, and they were both singles.

There are some downsides to Wilson’s approach, one of which is that the walk rate is up to 10.7 percent. That’s not the highest mark of his career, but it is a significant jump over his 6.8 percent in 2016 and turns what would be an elite set of peripherals into merely very good. Living above in the zone and coming inside as much as Wilson does can backfire if hitters don’t swing, and a drop in first-strike percentage to just 52.1 percent, well below his career average of 58.6, is putting the lefty in hitters counts a little too often.

With the demise of the sinker, the ground ball rate was always going to drop. It’s questionable how much that actually hurts Wilson, given that he got just one strikeout compared to seven walks with the pitch last year, and hitters batted .310 against it. Nonetheless, there are many more fly balls off Wilson than there used to be, and it’s probable that there will continue to be a few more home runs than he gave up in his earlier years as a ground ball machine.

All things considered, the Cubs have an excellent new piece for their bullpen, which already featured two of the league’s best pitchers by cFIP (Edwards, 75, and Wade Davis, 68). With Wilson, they have a third, and if the starters can get the ball to the seventh with a lead, it’s going to be very, very difficult for opposing lineups to overcome the gauntlet that will face them in the final three innings.

Tags: justin wilson |
Darius Austin
Follow @@DariusA64
Darius is a Giants fan from the UK, a strange combination which arose out of an interest in fantasy sports and Tim Lincecum. He also enjoys reading, castles, mountains, and Mario Kart 64.
read more from Darius Austin