Year in Review: The quality of Wade Davis’ performance since he became a reliever has been so good that this was in many ways his worst year since 2013, when he was still predominantly a starter. While his ERA was lower than run estimators might suggest, he was still significantly above-average no matter which measure he’s judged by. His DRA and cFIP were virtually identical to 2016, as were his SIERA and xFIP.

That said, this wasn’t the Wade Davis who was arguably the best reliever in baseball in 2014 and 2015. Although Davis struck out almost a third of the batters he faced, his walk rate also spiked to a career-high 11.6 percent. His remarkable home run prevention also deserted him, with the six he gave up this year double his total in the previous three seasons combined. Much of that change may be down to simple luck, but a combination of the ballpark switch and the change to the baseball itself probably also played a part. Regardless of the reason, it makes a significant difference for a player who gave up just 8 runs in total in both 2014 and 2015.

While Davis avoided a recurrence of the forearm strain that twice landed him on the disabled list in 2016, his velocity didn’t rebound to former levels, instead declining slightly again. Davis is still averaging nearly 95mph on his fastball, but topped out at 98 after touching 100 in each of those three previous relief seasons.

The 32-year-old also threw a career-low percentage of pitches in the zone, ranking as the sixth-lowest amongst all relievers. Davis was still good at getting hitters to chase many of those pitches, so that also contributed to his strikeout rate staying high, but the free passes are at such a level that it’s easy to wonder if those truly elite days are ever coming back.

July and August were particularly concerning from a control standpoint, as Davis posted a 16/14 strikeout-walk ratio across those two months, getting away with it thanks to some good fortune, particularly an incredibly low BABIP in August. The fastball hasn’t been as effective, particularly against right-handers, and comparing his Baseball Savant heatmaps from 2015 (left) to 2017 (right) shows a fairly significant difference in approach. 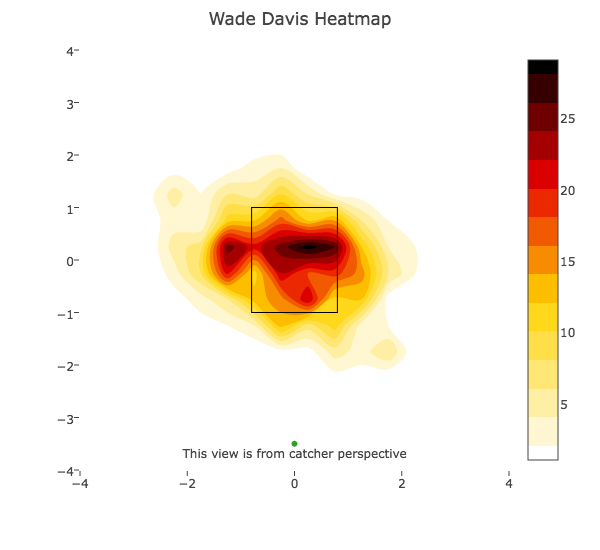 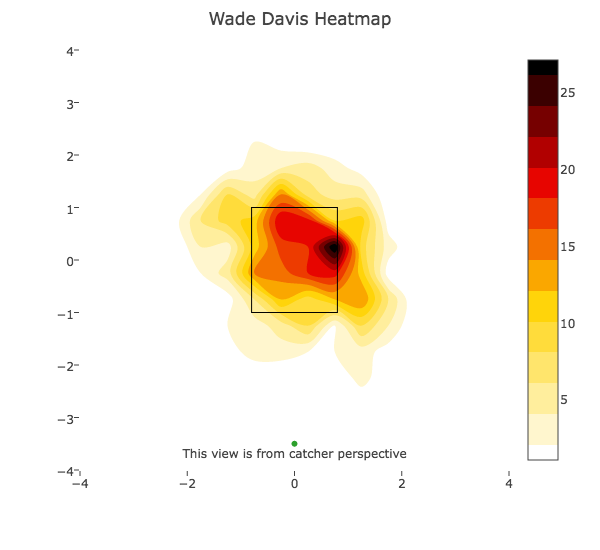 Davis used to go right after hitters in the zone with the fastball, as that thick band in the upper half of the 2015 image shows. In 2017 he has been trying to work away on that outside edge much more, yet the results have been significantly worse, both in terms of the walks and the quality of contact. Davis’ 2015 xwOBA on the fastball was .239, which was both much higher than his actual .193 mark and still an indicator that he was inducing poor contact a significant amount of the time. In 2017 it was a below-par .328, almost identical to his actual .320. Simply put, Davis is getting hit far harder on his most frequently used pitch, even though he’s being more cautious with where he locates it.

These are ultimately minor quibbles in the grand scheme of things. Davis was still 20 percent better than league average by cFIP and was about the only reliever left who Joe Maddon seemed to trust by the end of the season, to the extent that he was rather overworked in the playoffs.

Looking Ahead: Davis was still fundamentally a very good reliever in 2017, and a team will likely pay him as an upper-tier closer. The warning signs are there, especially if the fastball continues to decline, but his ability to induce swings and misses remains intact and he should continue to be one of the league’s better bullpen arms.

Theo Epstein has indicated that the Cubs are certainly interested in re-signing Davis, and clearly has extreme confidence in his ability to handle high-pressure situations. The team certainly won’t be alone in trying to acquire his services for 2018 and beyond, with divisional rivals St. Louis amongst the teams looking for a closer with Seung Hwan Oh a free agent and Trevor Rosenthal becoming one of the latest victims of Tommy John surgery.

A reasonable comparison for Davis might be Mark Melancon, who turned 32 in March not long after receiving a four year, $62 million contract from the Giants. Melancon was coming off a similar run of sustained success as the Pirates’ closer, albeit with a cleaner track record in terms of health. Given that Davis did make it through 2017 healthy, that shouldn’t play too significant a role in his contract negotiations, so it wouldn’t be a surprise to see him receive a similar four-year deal in the $60 million range.

Whether the Cubs will be willing to pay that kind of money for a bullpen arm is another matter. The context of an postseason in which Chicago was sorely lacking in reliable relief options is certainly likely to push them towards resigning Davis, and the trades for both Davis and Aroldis Chapman in recent years have demonstrated that Epstein & Co. are prepared to give up significant future assets for high-end bullpen pieces.

Although the situation seems ripe for Davis to return to Chicago, Epstein will also be aware of the volatility of relievers, particularly having seen the dominant relief performance of NLCS rivals Los Angeles, who rode the likes of Brandon Morrow and Kenta Maeda to the World Series, both players who weren’t even part of the bullpen picture six months ago. The rotation is also going to need to be addressed, and committing $15-plus million a year to Davis would represent a significant limiting factor in those negotiations.