Year in Review: Following four years as a reliable, durable, slightly above-average starter, 2017 was a big disappointment for John Lackey. He still pitched the full season, arguably impressive in itself at the age of 38, but at times the Cubs probably wished he hadn’t. Instead of getting that 2-3 WARP Lackey of the past four seasons, Chicago got the second-worst season of his 15-year career, behind only his disastrous 2011 campaign that was immediately followed by Tommy John surgery.

While there were just small declines in some of Lackey’s peripherals, with a slightly elevated walk rate and slightly reduced strikeout rate, neither pointed towards quite such a precipitous drop-off from his 2016 performance. The number of hits he gave up did increase from 7 per nine to 8.7, but that only matched his 2015 rate, a season when he pitched 218 innings, finished with a 2.77 ERA and got down-ballot Cy Young votes.

The nature of the hits Lackey surrendered was the problem, as 36 of the 165 he gave up were home runs, the worst total in the NL. Even factoring in the dramatic increase in league-wide home runs, this was a huge departure from his previous performance. Only Rick Porcello (38) gave up more, and Porcello did so while pitching over 30 more innings. Lackey was just barely saved from having the worst HR/9 mark in baseball by Jeremy Hellickson, who surrended 1.92 long balls per nine, compared to Lackey’s 1.90, the worst mark of his career by almost 0.5. 23 of Lackey’s 30 starts featured at least one homer; on three occasions he surrendered three.

To be fair to the veteran, things weren’t quite as bad in the second half, with a HR/9 of ‘only’ 1.50. The other peripherals were more or less the same, however, and overall Lackey needed a significantly better-than-average BABIP of .268 to even produce this performance (although he could have both given up fewer runs and yet had a BABIP closer to the mean if so many balls hadn’t ended up over the fence). The playoffs also went poorly for Lackey, as he gave up the walk-off homer to Justin Turner in the second game of the NCLS, then allowed the Dodgers to extend their lead by two runs in Game Five in an inning that included two wild pitches, although the game and series was all but lost at that point anyway.

It’s also important to note that a 4.59 ERA isn’t actually bad, relatively speaking, for starting pitchers. The league-average for starters in 2017 was 4.49, a number that just three years ago would have looked near replacement-level with the league at 3.82.  The fact that Lackey was perhaps lucky to get to 4.59 is less encouraging.

DRA suggests that Lackey deserved to give up more runs than he actually did, with cFIP also indicating that he was 10% worse than league-average. Statcast’s expected (xwOBA) and actual wOBA marks for Lackey are just a single point apart, with his xwOBA at .335, when considering the quality of contact, it’s hard to argue that he deserved better luck on his balls in play. Similarly, Andrew Perpetua’s xStats suggest that Lackey should have allowed a .306 BABIP and a .480 slugging percentage. His expected home runs total is less than his actual at just under 31, but his expected doubles are at 36, six more than he actually gave up. Good quality, hard contact was made against Lackey on a routine basis.

There was a clear velocity decline to match Lackey’s decline in production, which is probably more surprising for the fact that it took him until the age of 38 to experience such a decline, when it would have come several years earlier for most pitchers. He lost a full mile per hour off his average fastball speed, dropping it down to 91.4 mph, and over two off his peak, going from a maximum of almost 97 mph in 2016 to 94.6 in 2017.

Lackey also made significant changes to his pitch mix, throwing his slider more than at any point in his career, and dropping his fourseam usage for the third-straight year: 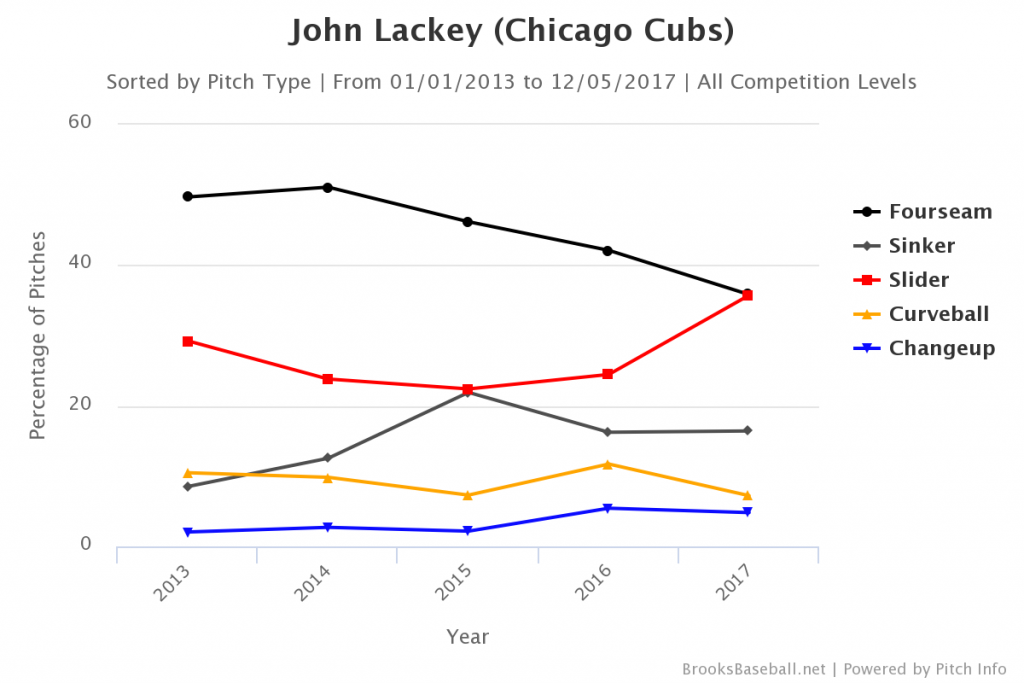 This is far from telling the whole story, however. Lackey made a fundamental switch to be a much more slider-heavy pitcher from the start of July. Over those final three months, the slider replaced his fastball as his primary pitch, and it wasn’t close: 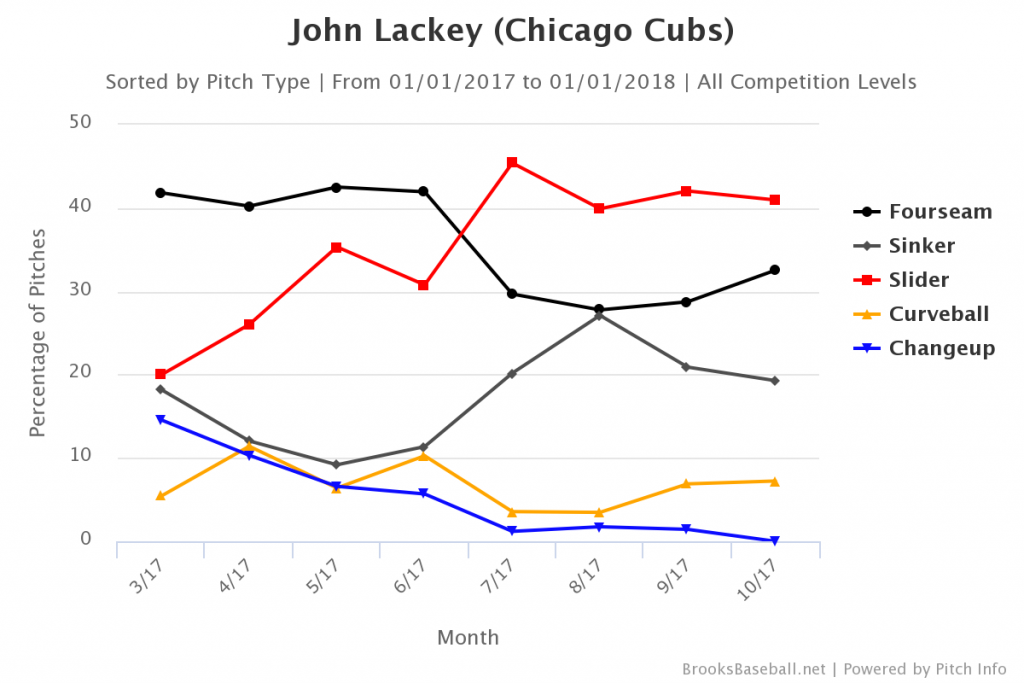 An early-season effort to feature the changeup more often, carried over from that slight increase in 2016 was also ditched in the second half. Strangely, Lackey also seemed to want to go to the sinker more often, which was his worst pitch this season: opponents hit .346 against it, with a .631 slugging percentage, and it didn’t improve all that much in the second half (.321/.564). It’s possible that with a diminished fastball, and a less effective changeup as a result, Lackey simply decided to follow the increasingly common route of featuring his best pitch most frequently, regardless of type.

As noted, the results were better with this approach, but the peripherals were essentially the same. Whether throwing the slider over 40 percent of the time is sustainable for Lackey over a full season remains to be seen, as those final three full months are his three highest monthly slider use percentages in the eleven years since tracking began.

Looking Ahead: Now 39, Lackey is apparently still planning to pitch in 2018, despite Jon Lester’s suggestions to the contrary following Lackey’s final, division-clinching start of the regular season. With the Cubs still very much among the World Series favourites and Lackey presumably only looking to start for a contender if he’s not retiring, an affordable one-year deal to return to the team that he won his third ring with and that features his good friend Lester is an entirely plausible scenario. It’s all but certain that he won’t sign anywhere unless he’s guaranteed a starting role, as he indicated this July when there were questions about his rotation spot.

If Lackey doesn’t land back with the Cubs, there aren’t so many other obvious fits on clear World Series contenders. Among this year’s division winners, the Astros, Dodgers, and Indians all have full rotations with further options in the bullpen and minors. The Nationals could use Lackey as their fifth starter, with Joe Ross undergoing Tommy John surgery, but that would also block top prospect Erick Fedde. Lackey’s old team in Boston have four spots locked up and would likely prefer to keep the fifth open for Eduardo Rodriguez once he returns from knee surgery.

Beyond that, both the Brewers and the Twins of the potential wild card teams could use a starter and may derive some extra benefit from having such an experienced player on what should be relatively young rosters overall. However, Lackey’s original team, the Angels, and the team from his home state, the Rangers, have both the need for a reliable starter and obvious strong personal connections. Texas has questions at almost every spot in the rotation; Lackey grew up a couple of hours from Globe Life Park, attended UT Arlington, and lives in Fort Worth. The Angels also have other areas to address, but Lackey spent ten years with the organization and they’d certainly benefit from a durable starter on a staff that featured two relievers as its WAR leaders in 2017.

Tags: John Lackey |
Darius Austin
Follow @@DariusA64
Darius is a Giants fan from the UK, a strange combination which arose out of an interest in fantasy sports and Tim Lincecum. He also enjoys reading, castles, mountains, and Mario Kart 64.
read more from Darius Austin