It’s time to check back in on one of last season’s breakout rookies, a slugger who won fans over with his pop and his ability to play both the infield and the outfield, but has struggled enough early this year to prompt talk of a Triple-A assignment. No, I’m not talking about Cody Bellinger. I’m talking about Ian Happ—who is… no longer struggling?

Well, it’s not quite that simple. There have been two halves to Ian Happ’s season so far. You’re probably familiar with them:

Happ has a powerful upper-cut swing, and pitchers were attacking him in exactly the way that Joe Maddon predicted would undermine the fly-ball revolution: a steady diet of high fastballs. There’s a hole in his swing at the top of the zone. The hole was there last year, too. But in the first six weeks of this season, it got deeper. In fact, it grew so much that it’s easier to visualize the “hole” as where he was able to make any contact at all. 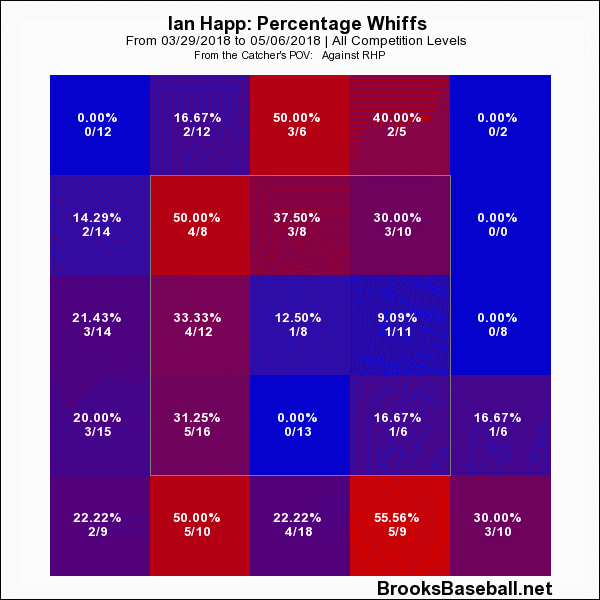 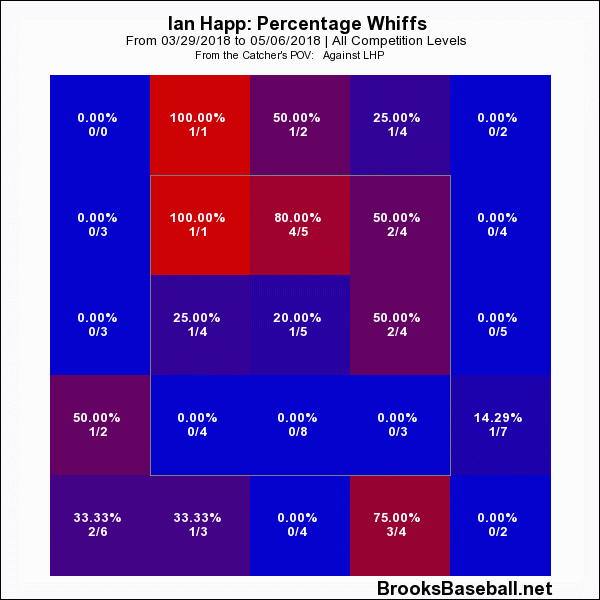 Closing that chasm has only been part of the story of Happ’s turnaround. It might not even be the largest part. While he’s beaten the hole at the top of the zone back to last season’s size, it’s still there—especially when he bats lefty, as he does most of the time. 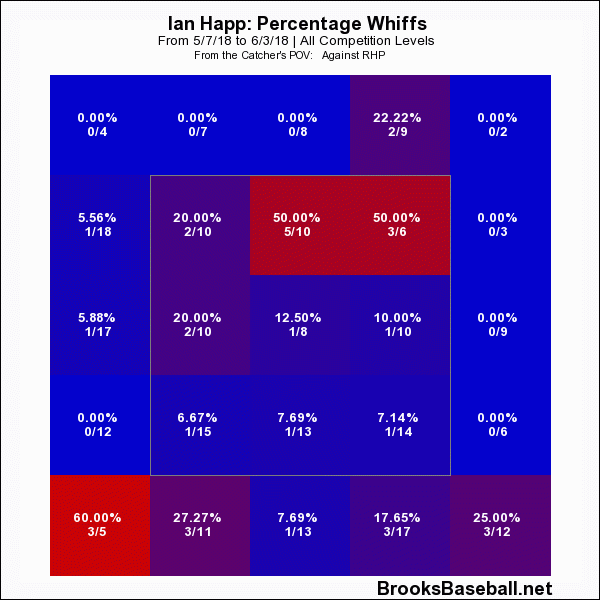 With his swing, Happ’s might always be susceptible to a four-seamer at the top of the zone. Unsurprisingly, his strikeout rate since May 7, while lower, has simply moved into the realm of the comprehensible. 34.6 percent is still dangerously high.

The swinging strikes Happ has cut out—and he’s cut out a lot of them (from a 23.1 percent rate through May 6 to 13.6 percent after)—haven’t primarily come against high fastballs. They’ve come against breaking and off-speed pitches low and/or away.

Even last year, Happ was swinging at plenty of pitches outside the zone. Like the high fastball problem, this only got worse at the beginning of 2018. Since May 7, though, something has changed. He’s simply not swinging at pitches out of the strike zone, especially when it’s one of those high fastballs that misses up: 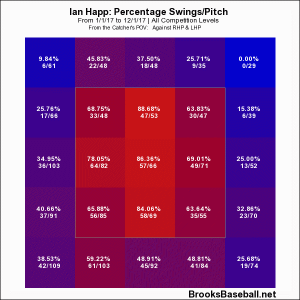 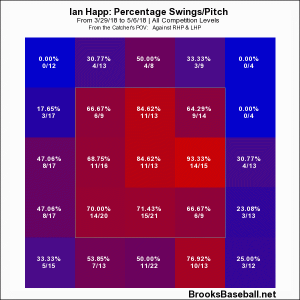 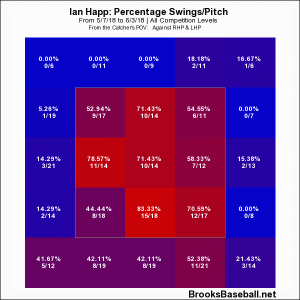 I know those charts are small, but I think the point is clearer if you can see all three at once. They remind me of an eye exam, the doctor cycling through a series of lenses until the right one snaps into place. Ian Happ is seeing the strike zone exceptionally well right now. This isn’t entirely new: his command of the zone was part of his scouting report as a prospect, making this development more believably sustainable. Moreover, he’s being more selective in the strike zone, improving his contact rate there by nearly 13 percent:

What we’ve seen with Ian Happ is a hitter acting on the mantras of the Cubs’ player development process: selective aggression. Wait for the pitch you can drive. In his case, it’s had the added bonus of putting him ahead in counts more often. Through May 6, the first pitch was a strike over 60 percent of the time. Since then, just 48.7 percent.

Still, I’d predict that there’s another round of adjustments coming. I don’t say this because that’s the nature of baseball, or of sophomore campaigns, but because Happ’s 23.1 percent walk rate since May 7 hasn’t just been the product of his own discipline: opposing pitchers haven’t moved into the strike zone against Happ yet. (They’ve actually been in the zone marginally less often.) Now, maybe moving into the zone more often will prove disastrous for pitchers—we can only hope so. I take this as a sign that other teams have yet to adjust to Happ’s adjustments, preferring to see if his plate discipline is sustainable. That won’t last forever. But the fact that he has already reacted to big-league adjustments not by pressing, but with zone recognition and patience, gives me confidence in his adjustments to the adjustments—much more so, to be honest, than I had in him a month ago.

J.L. Wall
J.L. Wall grew up in Louisville, Kentucky, where he somehow became a Cubs fan at age six or seven -- it may have had something to do with a really cool-looking Ryne Sandberg Topps card. A writer, teacher, and academic, he remains above all a baseball obsessive.
read more from J.L. Wall