What You Need to Know: The Cubs’ offense broke out of their collective slump in a big way against Cardinals’ starter Michael Wacha, taking him deep three times and piling up nine runs on him in four-plus innings, turning the game into a rout early. With the big cushion, Jon Lester turned in another solid performance, yielding only two solo home runs in six innings of work.

Next Level: The big story of the night was the early home runs hit by the Cubs’ offense, an offense which, outside of their big 11th inning on Monday night, struggled to get anything going during their series in Milwaukee. And none of those home runs is potentially more meaningful than Kris Bryant’s third-inning shot, his first since May 14th. The 107 at-bats in between home runs was the longest drought of his career.

Over the last week few weeks, we have seen Bryant fail to connect on pitches in the heart of the zone that he normally punishes. Whether the struggles have been mechanical, mental or some combination of the two, only Bryant knows. However, he did not miss his chance with this meatball from Wacha: 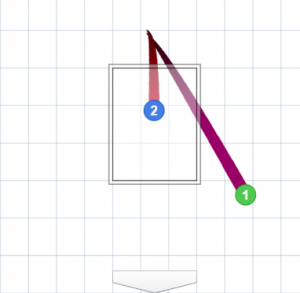 Getting Bryant back to his normal level of power production will be a big boost for the Cubs, who came into tonight ranking only 11th in the NL team home runs, despite ranking 3rd in runs scored. Related to that, Len and JD mentioned a surprising statistic during the broadcast tonight, noting that the Cubs ranked dead last in the National League in the percentage of runs scored via the home run, with only 33.7% of their runs coming from the long ball so far. In 2017, with essentially the same offensive contributors, the Cubs scored 42.9% of their runs via the home run, and in 2016 the number was 39.6%.

A team shouldn’t necessarily aspire to score a large percentage of their runs via the home run, but one would figure the Cubs will end up much higher in that metric before all is said and done. Given the power potential up and down the lineup, once the Cubs start putting a few more balls into the seats, we could see this offense reach another level.

Bottom WPA Play: Addison Russell’s lineout to right field in the second inning, a failed hit-and-run that led to Javier Baez getting doubled up at first base (-.053)

Up Next: The Cubs will look to take the series on Saturday evening behind Kyle Hendricks, who will match up against the Cardinals’ Carlos Martinez.

Tags: Game Recap, st. louis cardinals |
Andy Ziccarelli
Andy is an intern for BP Wrigleyville. He is a native Chicagoan, but currently resides in the San Francisco Bay Area, where he is a PhD student studying structural engineering.
read more from Andy Ziccarelli