Just as the swallows return to Capistrano every March 19th, there are tropes in sports that won’t go away. When the Bears preseason camp opens this summer, people will breathlessly wonder who the backup quarterback will be, conveniently ignoring the fact that if he actually has to play, the Bears season will be over (see Hanie, Caleb and the 2011 season). The Bulls bench is agonized over despite the fact the starting five played over half the minutes (which would have been closer to 60 percent if Derrick Rose had played more than 51 games).

The same attention occurs in every spring training camp as people speculate on the fifth starter, and the Cubs weren’t any different. Going into this year, it was a legitimate question, and probably gained more discussion due to the lack of competition at other positions. With Jon Lester, Jake Arrieta, and Jason Hammel reasonably assured of the top three spots in the rotation, Travis Wood, Kyle Hendricks, and Edwin Jackson were the contenders to fill out the rotation, especially when Tsuyoshi Wada was placed on the disabled list to start the season. Jackson was eliminated in spring training, and the Cubs opened with what on paper was a pretty decent starting rotation.

Even here, the term “fifth starter” isn’t entirely accurate, as the Cubs started the year with a rotation of Lester, Arrieta, Wood, Hammel, and Hendricks. There are any number of variables that go into setting a rotation such as handedness, power pitcher versus finesse, opponent and days off. It’s easy to determine that Hendricks might have been the fifth starter here, but it’s hard to say if Wood or Hammel was the number three starter, and in many ways, it’s a moot point—teams need a five-man rotation, and much below no. 1, the slot is largely irrelevant.

This is back in the news due to the issues the Cubs have had with a fifth starter. Wood was generally ineffective and was removed from the rotation after his start on May 14th, at which point the job was handed over to Wada. Like Wood, he was placed in the no. 3 slot between Arrieta and Hammel, and this is how he’s performed since his insertion into the rotation:

Most troubling is the inability of going deep in a game, placing strain on a bullpen that is already not exactly a strength of this year’s team. After a decent strikeout total in his first game, he’s lost the ability to strikeout hitters and racks up pitch counts that will decrease the number of innings he’ll pitch. In addition, teams seem to be able to not just get hits off him, but those of the extra-base variety (warning–extremely small sample sizes ahead): 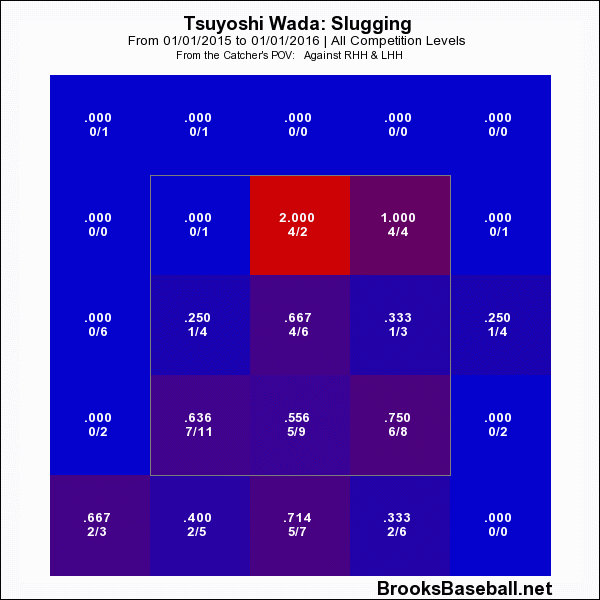 So what? Are the Cubs the only team in 2015 to have issues with their fifth starter? The surprising answer is a resounding no. Consider this very simple test—by this point in the season, most starters have around 12-13 starts, so how many teams have five starters with at least ten starts, implying both a stable rotation and a reliable fifth starter? As of Monday, two—the Angels (Jered Weaver, Garrett Richards, Hector Santiago, C.J. Wilson, and Matt Shoemaker) and the Giants (Madison Bumgarner, Ryan Vogelsong, Chris Heston, Tim Hudson, and Tim Lincecum). Vogelsong was so effective in his last start on Saturday that he had a sequence in the first inning of Single-Walk-Single-Walk-Walk-Walk. He actually walked in two runs in a row. This is what is considered the apotheosis of the fifth starter this year (actually, the way the Giants’ rotation is constructed, Vogelsong is in the no. 2 slot, but I was on a roll).

This means there are 28 teams still looking for a fifth starter. There are numerous reasons why, and reviewing the other NL Central teams can illustrate these reasons. Beginning with the Cardinals, they were clearly set at the beginning of the season with a rotation of Adam Wainwright, Lance Lynn, John Lackey, Michael Wacha, and Carlos Martinez. That rotation would be one of the best in baseball, but Adam Wainwright is gone for some time (he’s officially on the 60-day DL), and now Lance Lynn is on the 15-day DL with a strained right forearm. For now, they have Jaime Garcia filling in for Wainwright with fairly decent results, and Tyler Lyons for Lynn, who’s been less than spectacular. The lack of a dedicated fifth starter has certainly hurt the Cardinals as they have the best record in baseball by a fairly healthy margin.

The Pirates’ top four is set with Francisco Liriano, Gerrit Cole, A.J. Burnett, and Jeff Locke having very solid years. They started the year using Vance Worley as their fifth starter but have switched over to Charlie Morton in the past month, and since he’s 4-0 with a 1.063 WHIP in those starts, he’s probably going to stay there for awhile.

The Reds’ rotation is in disarray, and the loss of Homer Bailey in late April certainly didn’t help. They only have three starters with at least ten starts, and they’ve used four pitchers to try to cover the other two slots and just released one of them, Jason Marquis. They need to get their fourth slot down before they can worry about a fifth.

The Brewers didn’t really have a problem setting their rotation, at least they didn’t until Wily Peralta went on the DL in late May. No, their problems are in the results, since their starts have a combined 14-33 record with 16 no-decisions and a combined WHIP of 1.423 in those starts, second-to-last in the majors to the Rockies, who have a built-in excuse.

The Cubs have options, and they’re not desperate ones either. They can continue to roll out Tsuyoshi Wada and hope he can figure things out, but that might not be a luxury they can afford if his general pattern of not being around the plate allows for teams to wait him out and drive up his pitch count. They could perhaps return to Edwin Jackson, who has been generally effective this year but hasn’t been used in many high-leverage situations. He also might need some stretching out, but chances are that wouldn’t take long. They could go back to Travis Wood and hope he regains the form he showed in 2013, but it’s been over a year, and there comes a point when reality has to be tempered against hope.

One thing I’m reasonably certain about is that a trade for a fifth starter probably won’t happen. A trade for a top-line pitcher like Cole Hamels or David Price could shift everyone down and solve the issue, but this isn’t adding a fifth pitcher as much as adding another stud. The Cubs have the pieces to make interesting offers for either of these pitchers and the resources to either pay what’s left of their contracts (around $100 million through 2019 for Hamels) or sign to a free-agent deal like Price.

Starting pitchers are hard enough to come by—if 150 are necessary to staff MLB teams each year, only around 120 pitchers have pitched at least 50 innings this year, and of those, only around 60 or so have a BWARP of .5 or higher. Teams don’t whine about not having a decent fifth starter, because they know how difficult they are to find. They instead place their efforts into making sure they at least have a chance to stay competitive in that fifth start, which is the most any team can hope for. This chart shows how many teams had as many as five starters with at least 25 starts since 2000, which is a pretty low threshold for a fifth starter:

There are plenty of teams with four, but that’s not what this post is about. The Cubs don’t need to worry about a fifth starter as much as acquire another starter, and that’s something just about every team in baseball can say. Looking at the chart above, many of the teams listed ended up making the playoffs, showing the importance of continuity and stability in a rotation. If the Cubs use a different pitcher from here on out in the fifth slot and end up with success, the lack of a fifth starter will be irrelevant, especially since that pitcher would likely not make the playoff roster anyway. Funny how that turns out.

Tags: Chicago Cubs, fifth starter, Tsuyoshi Wada |
Scott Lindholm
Follow @ScottLindholm
Scott is married with two great 20-something daughters, lives in Davenport, IA and has been a Cubs fan since 1970. He writes and is an editor at Beyond the Box Score.
read more from Scott Lindholm