Junior Lake is no different than any other prospect: the experts marvel at the potential, but wonder if the player will be able to take that fabled “next step” and become a productive major leaguer.

That next step typically involves polishing any existing skills until they’re major-league ready while making adjustments at each level of the minor leagues until those skills are fine-tuned enough to take on the best baseball players in the world. And then, once a player makes it, he needs to make more adjustments if he wants to stick around.

There’s been a lot of debate about Lake—how good of a prospect he is, whether or not he’ll ever figure it out, and even about converting him to a pitcher. I’m here to reassure you that everything is going to be OK—Lake is going to make it. Let me tell you why.

I believe Lake is going to be a productive major leaguer capable of starting on an everyday basis for a big league team.

There, I said it. He’s got the talent, and he seems to be capable of making those oh-so-important adjustments, which is what I want to focus on in this article. I believe he has the temperament that will allow him to fulfill his physical potential and make the necessary adjustments to become a legitimate major-league player. In my last post, I discussed how great it would be if we could quantify a player’s adjustability, and today I want to look at the types of things we could look at to do so.

Let’s start with what most prospect watchers already agree on. Lake is a very athletic player with good speed, good power, and a plus-plus arm. That alone should make him a shoo-in for fourth outfielder work. But there are signs that he’s destined for more, so let’s zero in on those.

The big questions about him have always been his defense and his ability to control the strike zone. Lake came up as a shortstop, got moved to third, and eventually settled in the outfield, where he’s been for the past three years. For a guy who’s only been playing the outfield for three seasons, he’s done a good job and I would expect him to get better.

The simple fact that he switched positions is a good adjustability indicator. I’m not saying every player that gets moved around automatically has a high “adjustability tool,” but in Lake’s case he didn’t complain and he tackled his new position(s) as best he could. That’s all you can ask for. Making a move like that isn’t easy, though it helped that he started from a tough position like shortstop.

“He came up, did his work, got to the field early, was never late, played hard, he was prepared, and I think that’s a good guy for [young players] to look at and see how he came in and had immediate success and why,” Samardzija said.

What about Lake’s other, bigger weakness: controlling the strike zone? Lake is notorious for his lack of walks and chasing pitches outside the zone. His walk rate has been below average his whole career and that’s been the biggest obstacle on his path to the bigs. 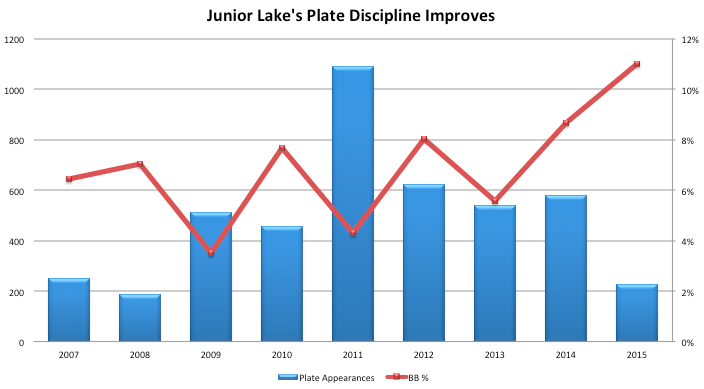 These numbers count all his plate appearances regardless of level—major leagues included. What you see here is a guy who has adjusted at every level—and the trend is positive. The turning point occurred in 2014, and more specifically in the Dominican Winter League (DWL), where it looks like his main focus was working on his plate discipline. I say “it looks like” because I haven’t asked him and haven’t read anything about what he was doing differently. But the numbers tell the story: he wasn’t paying attention to his batting average—he was taking a lot of walks.

Yes, it’s the DWL, which Lake has played in every year since he was 19. Yes, it’s a small sample size. But that stint revealed a different side of him. It proved that Lake can improve his plate discipline, and it was yet another sign that he’s capable of making those crucial adjustments.

What other “adjustability factors” could we look at?

Here is a tweet from last year that tells you a lot about Lake:

Not many guys have a homerun and a bunt on their video highlights page…gotta love #JuniorLake #Cubs pic.twitter.com/pNzsGPEpgj

I don’t have any data to back this one up, but the fact that he’s willing to bunt tells me his ego won’t get in the way of doing what needs to be done to win games, which is a great sign.

Another criticism Lake has faced was his swing: it was too messy and out of control.

Another noticeable red flag about Lake, the kind of red flag I notice only on a whimsical occasion, is his busy, almost conspiratorial, hand movements.

That wild swing is gone and Lake is much quieter and shorter to the ball now:

Lake is making adjustments left and right, so don’t I have you convinced yet? We still have to talk about a couple of incidents that you may or may not be aware of. And if we’re trying to quantify something about Lake’s personality to make our case, we can’t leave out these two “situations” he was a part of. The first is from the DWL:

And the second was in the major leagues (Maddon was NOT happy):

What do we make of that? It’s hard to say, but you could either say he’s a jerk or he just let his emotions get away from him. Lake is known for being a high-energy, intense player who really cares and tries as hard as he can, which can sometimes express itself on the field as a boneheaded play (or rage). Lake is hustling and trying hard, which is great. It’s just another thing he’ll have to learn to channel properly once he gets a chance to consistently play in the big leagues. But I’d rather have a fiery guy than someone who’s just collecting a paycheck.

So how does Lake make his way to the big leagues? For one, he needs to keep getting at bats in order to make his case that he’s ready for a big-league job (which he’s doing at Triple-A: .321/.409/.494 with a walk rate of 12 percent). Then he needs to get lucky by either getting called up or traded to get consistent big-league at-bats regardless of the results; and getting called up will be tough on this Cubs team, barring an injury. He’ll have to work through that adjustment period and eventually express with statistical significance the kind of player he is: one who will strike out a lot, but also one who can hit 20-30 home runs, steal 15-20 bases, lay down a bunt if need be, and keep runners at bay from the outfield.

We’ve talked about the importance of making adjustments, and Lake has shown the capacity to make those changes at every level. Now he just needs a chance to prove it against the highest level there is—that’s the only way we’ll know for sure (duh, Carlos). It might not be with the Cubs, but if he’s traded, hopefully the Cubs will get some good value back because from where I’m standing, Lake has what it takes to make it.

Tags: Junior Lake |
Carlos Portocarrero
Follow @CarlosPorto
Carlos is originally from Guatemala, where nobody cared about baseball—not that he's bitter about it or anything. He now lives in Chicago, where he tries to get White Sox fans and Cub fans to just "get along."
read more from Carlos Portocarrero