I was playing golf with a friend of mine who’s a Cubs fan and knows I write about baseball. A couple weeks ago, he said, “Man, that uppercut swing of Kris Bryant drives me nuts. How does he ever plan on making contact?” Since my friend is a normal person, he’s unaware of sites like Brooks Baseball and Baseball Savant that make questions like this fairly straightforward to investigate. To say I was surprised by what I found is an extreme understatement.

This shows how pitchers approach Bryant, using Zone Profile charts from Brooks Baseball (all data through Friday, July 17th, but this link should show the most up-to-date data): 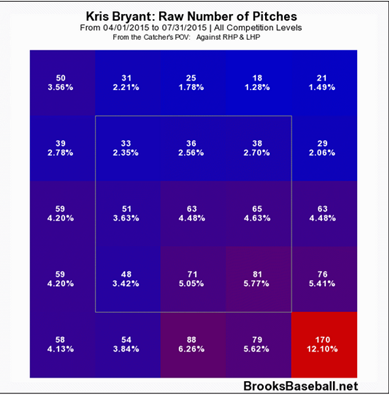 They’re banging away at the bottom of the strike zone, with almost one-third of pitches low and outside the strike zone. This is a tough pitch to reach with an uppercut swing, and when it is hit, chances are it becomes a weak ground ball and rarely hit in the air. This chart shows his slugging on pitches (actual chart): 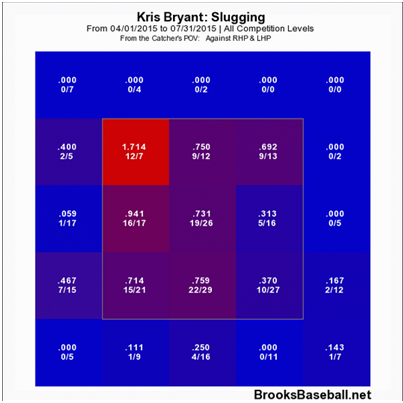 Not so good. So as a result, an educated Kris Bryant goes to the plate and lays off pitches low in the zone, correct (actual chart)? 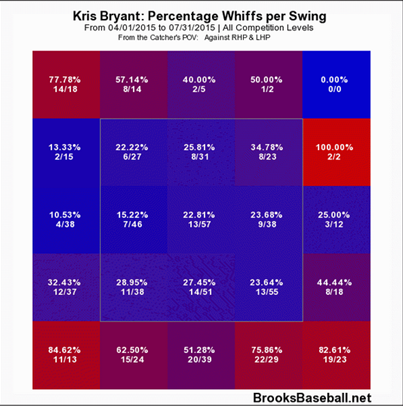 At the moment, he appears pretty content to swing (and miss) at those pitches. Show a propensity to do something, and with the wealth of data available, teams will pick up on it and drive it into the ground until something changes.

This is an issue for concern, and not just for Bryant. Joe Sheehan was on the Boers and Bernstein Show on July 14th, and he mentioned that pitchers pounding the lower part of the plate and getting away with it is a problem in baseball (the interview leads off this hour). Bryant has shown a willingness to take a walk, with an OBP that continues to be over 100 points greater than his batting average, well above the average spread of 70 points. But until pitchers are punished for throwing balls to him, they’ll have little incentive to give Bryant anything even remotely good to hit, especially if no one behind him in the order gives the opposing pitcher pause.

It’s become apparent that pitchers are quickly reaching the conclusion that they may lose to the Cubs, but it won’t be Kris Bryant hitting a 500-foot home run that will be the cause of that loss. As the one-run games continue to pile up, they serve as a marker of offensive futility, since it’s rare for one-run games to be high-scoring ones. This shows run scored in one-run games and non-one-run games for the first half of 2015: 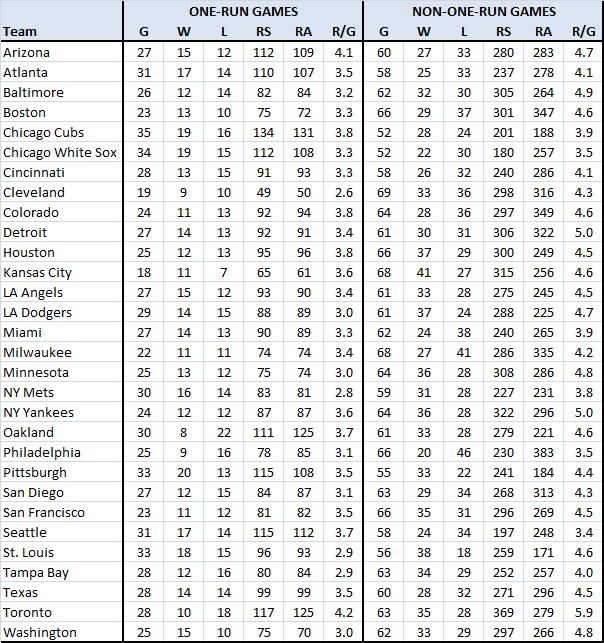 Whoops, guess I should have said teams score more runs in non-one-run games—unless they’re the Cubs.

One last tidbit from Savant—in the first half, Kris Bryant saw pitches outside the strike zone around 63 percent of the time, which is right around league average. This is what he did with these pitches:

So far, he’s been able to overcome it, and it’s a fair statement to say he’s lived up to the hype that preceded his call-up, perhaps even exceeded it given that his defense hasn’t been anywhere near as bad as people had been led to believe. He’s never going to be compared to Manny Machado or Nolan Arenado with the glove, but with his bat he can make far greater contributions than them, even though both are outstanding all-around third basemen. The odds of Bryant seeing a decent, hittable pitch decrease every time he swings at something in the dirt. Show the patience necessary to watch those pitches roll by, and pitchers will be faced with the very unpleasant dilemma of either walking him or giving him something to hit. He’s letting pitchers pitch him outside the zone—force them to change, and he’ll be downright dangerous.

Tags: Chicago Cubs, Kris Bryant, PITCHf/x |
Scott Lindholm
Follow @ScottLindholm
Scott is married with two great 20-something daughters, lives in Davenport, IA and has been a Cubs fan since 1970. He writes and is an editor at Beyond the Box Score.
read more from Scott Lindholm

I’d like to see a breakout by month because I could swear he wasn’t swinging as much at that low and outside pitch the first couple of months until he got sick of watching umps calling it a strike. You’re kind of scr@wed if your swing is naturally not made for a low and outside pitch yet umps repeatedly call strikes on pitches out of the zone in that area.