By now most Cubs fans are well aware that, after his start last Friday, Kyle Hendricks said his mechanics were all out of whack. That much was pretty clear to see for anyone who was watching the game, and the results just backed up what our eyes were telling us: Hendricks gave up five runs, eight hits, and three walks in 3 1/3 innings. For manager Joe Maddon, conclusive evidence that something was wrong came when Adam Eaton hit an opposite field home run. As we see below, of Eaton’s 16 career home runs, only two have been to the opposite field, and one of them came last Friday. 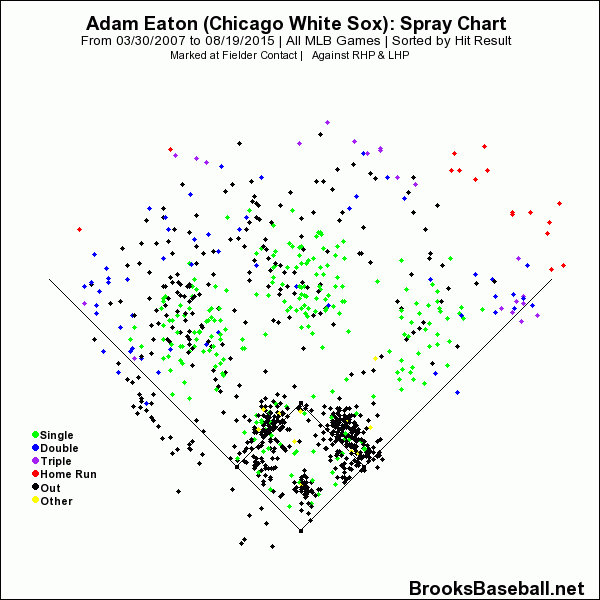 One batter later, Hendricks’ day was done. So, yes, Hendricks’ mechanics are all out of whack, but what specifically is wrong? Since there’s no way I’m going to be able to diagnose his issues on my own, let’s get it straight from the man himself.

“It starts simply with my leg kick,” Hendricks told me. “It isn’t where it needs to be; it’s a little low and it’s not close to my body which is making me not tall. So basically my back leg is a little collapsed, which already starts my angle off bad. From there, when I take my arm path—when I take my hand out of my glove—I’m kind of putting it behind my body and kind of closing myself off instead of keeping it in a straight line. Instead of going straight back to the center fielder, my arm is drifting all the way back to the right fielder, like behind me, which is closing off my upper body. And then once I stride, I’m not in a good position, like tall with my body, and then I’m shut off so I can’t—for me to make a good pitch and to hit a spot, my hand position needs to be perfect and it has to get there. If not, then I’m gonna miss spots.

“For me, when I’m going good, my body, everything is on line. Everybody has their own mechanics; some guys are more rotational to get more power, some guys are more teeter-totter, as we say, kind of going over yourself to get to the catcher. I just happen to be one of those guys who has to stay on line so my stuff works better and it gets to the bottom of the zone.”

And while all these issues may have come to a head on Friday, according to Hendricks they’ve been around all season.

“It’s been the whole year where it just hasn’t been right,” Hendricks said. “I’ve had outings where I’ve thrown well, but it’s just because I happen to be in a good hand position that day. My body just hasn’t been on all year.”

In fact, when I asked what would be a good start to look at for when Hendricks’ mechanics were going well, he told me my best bet would be to find something from when he was in Double-A. So that’s what I did.

Even with an untrained eye, we can see what Hendricks described to me in the GIFs above. However, I’d prefer to get some thoughts from someone who breaks down pitching mechanics for a living, so I talked to BP’s very own Doug Thorburn, and this is what he had to say:

Just comparing those two videos, he clearly has a pronounced back-side collapse (bend in the knee of the post leg) in the clip from this year when compared to 2013, and that knee-bend perpetuates through the stride phase and into foot strike to give him a lower center of gravity (and hence a lower release point). It’s interesting how he described the leg lift, but essentially his stride involved more of a step forward with the lead leg in 2015 rather than bringing the leg more naturally out of the lift phase. This can be seen along with the upper-body twist portion in the minor-league video and at 0:02 in the clip from this July—he utilized much more of an upper-body load as part of his delivery in the 2015 clip (arm going past center fielder and towards right fielder), but that extra twist was likely throwing a wrench into his trigger timing (when to start trunk rotation). He was more ‘linear’ in the older clip because he kept his throwing arm on more of a straight line to the plate (aligned with the centerfielder) to execute his arm path, rather than reaching back with an exaggerated twist of the upper-half or manipulating an exaggerated leg motion with his left-and-stride. He’s right that some guys can line up the gears better with that extra twist, but he is apparently not one of those guys.

It wasn’t just Doug and I who went and looked at old tape from Hendricks’ time in the minors. The crafty righty told me that he did the same after Friday’s game, trying to get an idea of what exactly he needed to get back to, and that’s when he clearly saw the issues he rattled off above. On Saturday, Hendricks—who throws every day without fail, whether he has issues to correct or not—went about rectifying the problems.

“We’re doing little drills,” Hendricks said about his work with pitching coach Chris Bosio. “He took a Bodyblade and he’d stand behind and put it like this (points to his right hip). So when I would come here (moves his right arm down to hip area as if he’s getting ready to throw) and I get my arm back and I hit it, then I know my arm is going too far back. I gotta keep it straight back behind me and not hit the Bodyblade. I would also come up to the balance point and I’d just hold it there. And he’d kind of hold me and make sure my leg kick was coming up through and my hands were close to my body, because I gotta get in this position first before I can get my arm path going.”

Hendricks also described a drill where he would pretend to be throwing to the catcher, take two steps to the right of the mound, do the same, then two steps to the left of the mound and throw again. He said this helps his body and arm path stay in line even at drastic angles, so then when he’s back on Wrigley’s mound, going from the inside corner to the outside corner doesn’t feel like a big deal to his body.

So he’s putting in the work—something that anyone who knows Hendricks won’t be surprised by. Until we see him back on the mound this Friday—and truly, even that won’t be enough—we won’t know if he’s back to where he wants to be. But so far, he’s liked what he’s found.

“It felt really good, so I’m kind of excited about it,” Hendricks said. “Just making sure I’m staying tall and making sure my leg kick is coming up through my body and then making sure my arm path is going straight back to the center fielder.”

When I was talking to Justin Grimm earlier this week, he told me that seeing 98 mph on the board gave him a little more confidence. While velocity isn’t everything, Grimm pointed out that it does allow you a little more room for error. Hendricks doesn’t have that luxury. According to Brooksbaseball.com, the hardest he’s ever thrown in the big leagues is 93.44 mph, and the last two months he’s peaked at around 92. Again, that’s his peak; velocity certainly isn’t Hendricks’ thing.

It’s essential that he have his command working if he’s going to succeed. For that to happen, Hendricks needs to have his mechanics in order, otherwise outings like last Friday may become more of a regular occurrence. When that happens, it taxes the bullpen, which becomes even more of a concern when we see how Jason Hammel and Dan Haren have struggled to go deep into games as of late (and Jon Lester’s performance on Wednesday certainly didn’t help matters).

Right now, the Cubs offense has been clicking. What they need is for the starting pitching to deliver solid innings. Shutting down the opponent doesn’t seem to be necessary anymore, but keeping the bullpen from being used prior to the sixth and holding the opposition to fewer than a half-dozen runs would be helpful. If Hendricks can once again find his rhythm and provide quality starts from the back of the rotation, it will go a long way to ease the concerns about the Cubs’ pitching—both from the rotation and bullpen—that have suddenly popped up.

This sounds a lot like a golf swing and the types of issues you have to work on when your mechanics get out of whack.

My question is, do they know why he started going to this new, unwanted motion? Hopefully, it’s not some sort of compensatory move due to an unknown injury.