Cubs fans tend to have a certain fatalism about them. When things are going well, we’re constantly searching for where and when things can and will go wrong. When things are going poorly, we lose our minds and declare all hope lost. This is understandable, given the context of the Cubs’ existence. Going 107 years without a World Series win not only takes spectacular mismanagement, but also requires tremendously poor luck, after all. Making matters worse is that the Cubs’ sworn enemies, the Cardinals, seem to be the perpetual beneficiaries of ridiculously good luck. All of that being said, I want to look at the ways luck has both benefitted and hurt the Cubs this season.

The Cubs were generally expected to be a competitive team this season, if not necessarily a great one. The Cubs began the season with playoff odds of 41.4 percent and an expected wins total of 83 according to PECOTA. Many fans would have been happy with this given how awful the team had been ever since 2010. The Cubs have maintained playoff odds better than their initial percentage for most of the season, but have occasionally fallen back to that level, the last time coming on July 29th, just before the Cubs went on a 15-of-16 run that would solidify their standing in the playoff race. It’s difficult to say, however, that the Cubs current record (73-51) is simply an aberration, as projections aren’t perfect, and predicting how a baseball season will unfold is an imprecise science, to be sure. 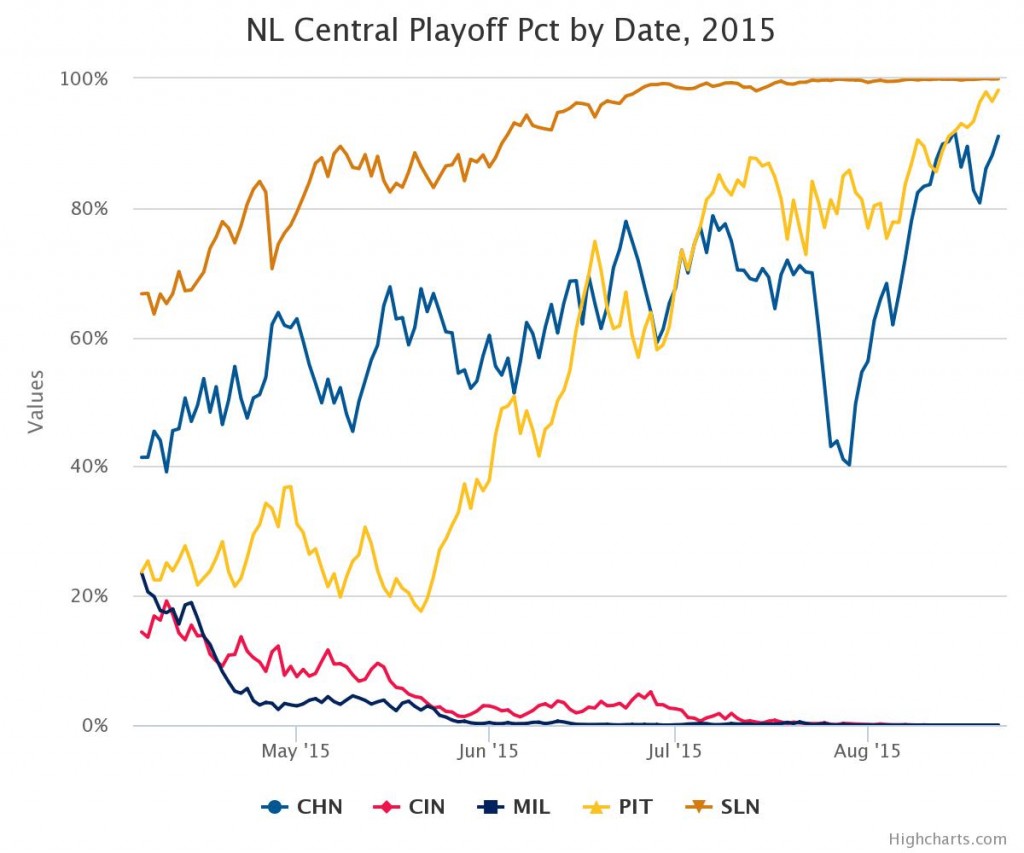 Is the Cubs current level of play where they theoretically “should” be, though? Well, that’s definitely a loaded question, as no two people will usually hold the same criteria, but for my purposes, I’ll be using 2nd and 3rd order winning percentage. You can refer to the BP Glossary for more info, but essentially, 2nd order winning percentage takes peripheral stats and figures out what a team’s record should be based on “expected” runs, while 3rd order does the same, but also adjusts for strength of schedule. The Cubs, coming into Sunday, were sitting at nearly four games above their 2nd order win percentage and nearly four above their 3rd order win percentage. That might sound like the Cubs have gotten very lucky, but all good teams generally do get a bit of good luck. This has to be placed into the proper context, as the Pirates were sitting at nearly six above their second order and the Cardinals at nearly eight above their second order. That is some phenomenal luck, relative to what the underlying metrics would say about these two teams. The Cubs have clearly been disadvantaged by being in such a talented and, frankly, lucky division.

As for more micro-level luck factors, the Cubs currently sport the ninth highest BABIP in the league at .301, but given that the 23rd best (Blue Jays) are sitting at .292, this doesn’t provide the Cubs any real substantial advantage. The Cubs have put together the league’s 18th best line-drive percentage, which isn’t a huge surprise given many of the team’s troubles at the plate earlier in the season. This goes to show that, yes, the Cubs have received a bit of BABIP luck, which has almost undoubtedly helped them in close games, but it still has not been enormous. Also, the Cubs have the league’s fifth best team DRA and the third best FIP, which despite the many complaints about the fifth starter’s spot and the bullpen, are very good. The Cubs currently sport the league’s sixth best ERA, so they’ve mostly been rewarded for their pitchers’ fine performances.

Looking at these various factors, one can conclude that the Cubs are breaking about even with regards to luck. Yes, the team has pulled ahead of their Pythagorean records, but that is often expected of good teams. When placed in context of the other teams in the NL Central, the Cubs have actually been a bit unlucky. However, it’s very easy for pitching metrics not to match real-world results, yet the Cubs have remained mostly immune to this due to a combination of talent, health, and great game management. The hitting has been just about what we would expect of it, except much better of late. Ultimately, I won’t say we can put the luck bugaboo behind us forever, but I’m confident in saying that this team is not having terrible luck this season.

Tags: Luck, Pythagorean |
David Blumberg
Follow @DGBlumberg
David is a recent grad of IU Bloomington with designs of obtaining a Master's in Sports Journalism. In his spare time, he enjoys watching and writing about baseball, singing, drinking Three Floyds, and enjoying Bloomington's many ethnic restaturants.
read more from David Blumberg

2 comments on “That’s Just Some Cub Luck: How Chance Has Affected the 2015 Cubs”

BaseRuns has had a strange year, in general. Because of the spike across the board in that particular category, I chose not to focus on it.