When I last wrote about Kris Bryant, he was coming off the worst month of his short career (a July in which he posted an OPS of .639) and was adjusting to many things about his new environment, including the low strike (which he told me about for that most-recent piece). However, things have shifted quickly, and Bryant has bounced back in August with his best month yet, slashing .338/.440/.662 with six home runs and five doubles in the month’s first 22 games.

“[Bryant] and [hitting coach] John [Mallee] have been doing a lot of nice little extra work,” manager Joe Maddon said following Bryant’s walk-off home run against Cleveland on Monday. “They’ve been making little, really subtle, kind of minor adjustments in his swing which I can see and I do like. The thing with KB that I really like is that he’s had to fight through adversity. Good spring, good start, hits a little bit of skid, but doesn’t quit. Some kids would. He has not, he’s battled through it. And now the offense is coming back to him. Kudos to him, man, that’s outstanding.”

Adjustments and putting work in to get better is hardly something anyone who follows Bryant will be surprised by; they’re just some of the many great qualities he’s been known for as he’s come up through the Cubs organization. That said, the fact that he’s made legitimate mechanical tweaks is quite intriguing, though that’s not exactly the way Bryant views it.

“Just more of a thought; just staying more through the ball instead of up and out of the zone with my swing,” Bryant told me. “For me it’s a thought, but it turns out being a mechanical thing, staying more through the ball. Just looking at video [and seeing] some of the pitches I’ve missed, I swing and I come out of the zone too much. I’m trying to be more level with it. Obviously a slight uppercut is good because of the angle of the ball, but I was too much or too extreme. We’ve been working on it every day with some drills that I used to do in college and it’s been working.”

So what was Bryant seeing when he looked at that video? 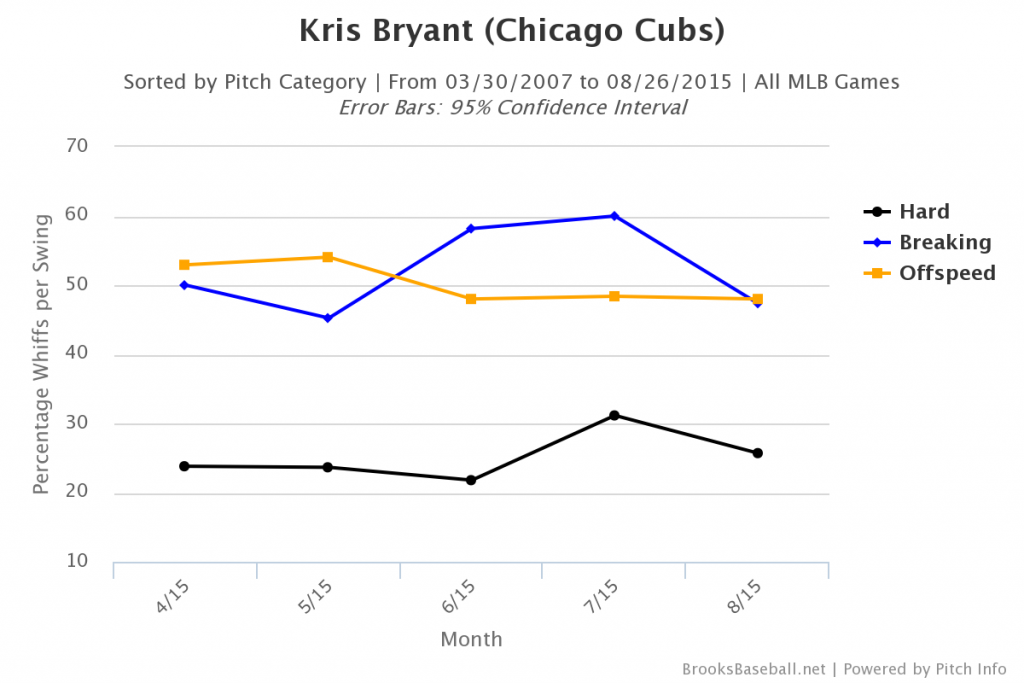 Well, he likely saw that in June he was whiffing way more often on breaking balls than he had been and that in July that trend continued while also suffering through a jump in whiff per swing on hard stuff. You’ll notice that his swing-and-miss tendency on off-speed stuff has dropped slightly since May. That goes hand in hand with his ability to lay off those pitches in general (he went from swinging at those pitches over 70 percent of the time in April to just 58 percent in May, and since then he’s been hovering around the 50 percent mark).

In short, Bryant struggled with the low strike, an adjustment that has to be difficult for any young player suddenly experiencing a new strike zone while simultaneously facing the best pitchers in the world. In the season’s first few months, when pitchers threw Bryant breaking or off-speed pitches, he struggled to lay off those down in the zone (this was the subject of my earlier article, linked above): 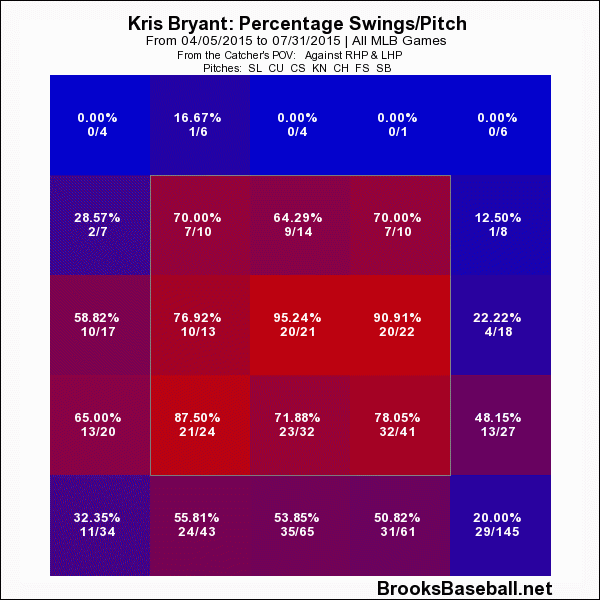 This month, Bryant has dropped the frequency with which he offers at pitches located just below the zone (represented by the squares at the very bottom of these images) by nearly ten percent: 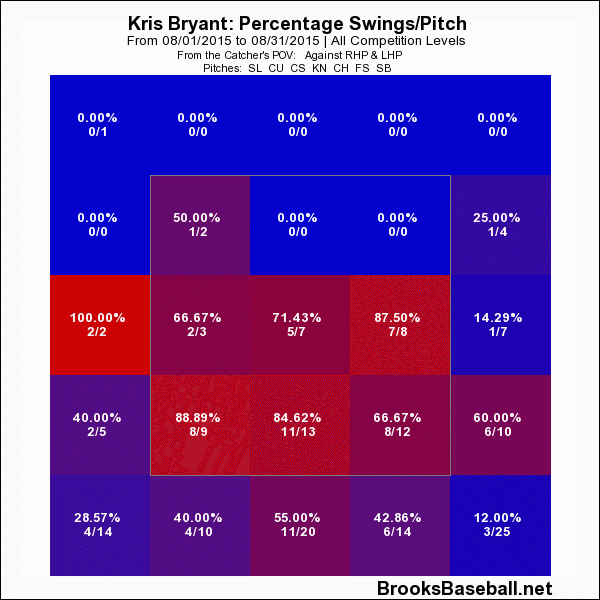 Pitchers have varied their plans against Bryant as the season has worn on, which is normal—the pitchers adjust, and the hitters are forced to adjust back. Bryant has done so quite well in his inaugural season: 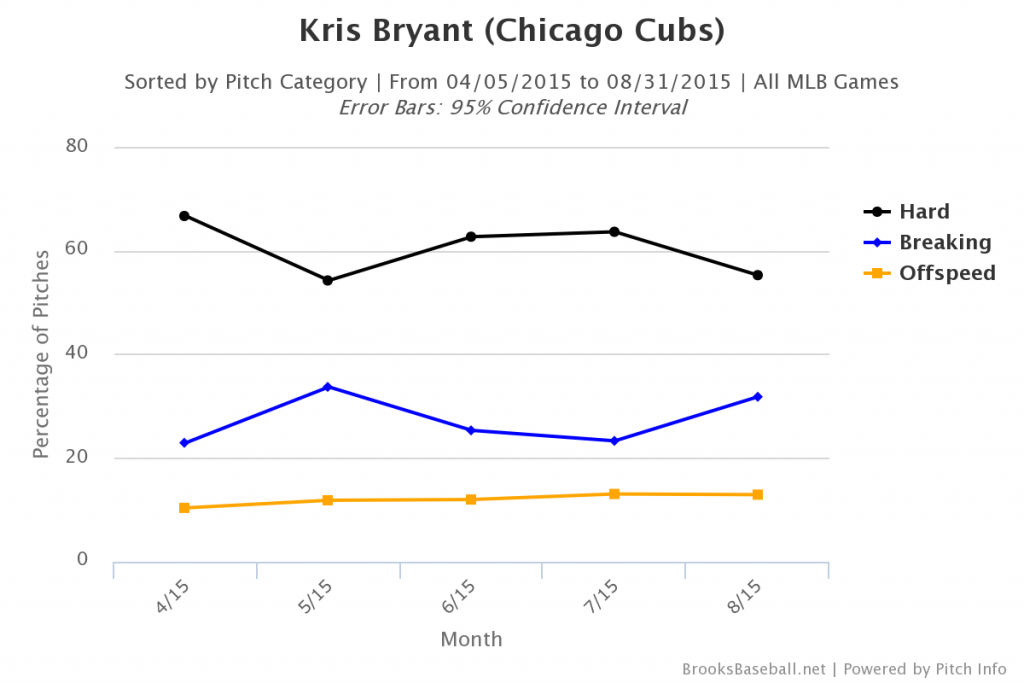 Looking at the monthly trends, above, we see—unsurprisingly—that pitchers went away from the hard stuff after Bryant’s first two weeks in the big leagues. That didn’t work as hoped, as Bryant followed up his solid 12 games in April by posting an OPS above .800 for both May and June. As the fastballs jumped and breaking balls fell, Bryant sunk into his worst month of the season:

Outside of the few times someone tossed Bryant a cutter, he pretty much failed against everything thrown against him. Then, the adjustments he, Mallee, and assistant hitting coach Eric Hinske worked on started having an effect, and what we’ve seen thus far in August is the result.

While the Cubs as a whole have put together a rather impressive August—honestly, I could really be breaking down about a half dozen Cubs hitters this month alone—Bryant is just crushing everything. Concerns about the changeup? Yeah, he seems to be doing fine with that. Curveballs? How does a 1.143 slugging percentage tickle your fancy? I guess one could complain about the fact that he’s only hitting singles on sliders, but I think going from a .000 batting average to .385 on the pitch from July to August is something of an accomplishment, regardless of other results. In short, despite pitchers increasing their breaking ball usage against Bryant from 23.3 percent in July (which is slightly below the league average of 23.9 percent) to a whopping 31.8 percent, things haven’t really worked out so well for them.

But let’s talk about the fastball. He’s facing just 55.4 percent hard stuff this month, only his second month below a 60 percent rate and well below the league average of 63.7 percent. If pitchers go back to pounding fastballs, could that be a move that causes Bryant to struggle as he works to adjust? There’s a theory out there that Bryant swings and misses at a lot of hittable fastballs in the zone. In general, Bryant swings at a ton of pitches in the zone (73.4 percent compared to the league average of 64.4 percent) and avoids those outside (27.7 percent to 30.8 percent). And yes, Bryant misses pitches in the zone quite frequently: his 77.1 percent contact rate of pitches in the zone is fifth-worst in baseball (for qualified batters). The only other (qualified) hitters in all of baseball this season who swing at more than 70 percent of the pitches they see in the zone, and less than 30 percent of those outside the zone, and have a contact rate below 80 percent are the Nationals’ Michael Taylor, and the Astros’ Chris Carter.

It’s certainly an odd profile, but Bryant has made it work. When I asked Bryant about the swing and miss, particularly on fastballs, he acknowledged that it will always be a part of his game. He said that as long as he’s swinging at strikes (and he is), he’s fine with it; he’s accepted that he can succeed and still have a high whiff percentage. Sure, he swings and misses, but Bryant is so aware of what his power zone is that he almost never fails to attack his pitch. 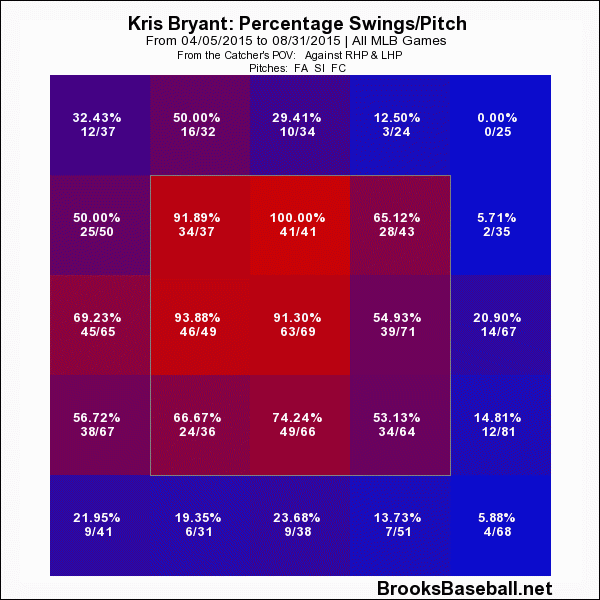 Looking at the heat map above, there’s a zone of four squares in which Bryant has seen 196 fastballs and only let 12 go by without swinging. And here’s how he slugs against those offerings: 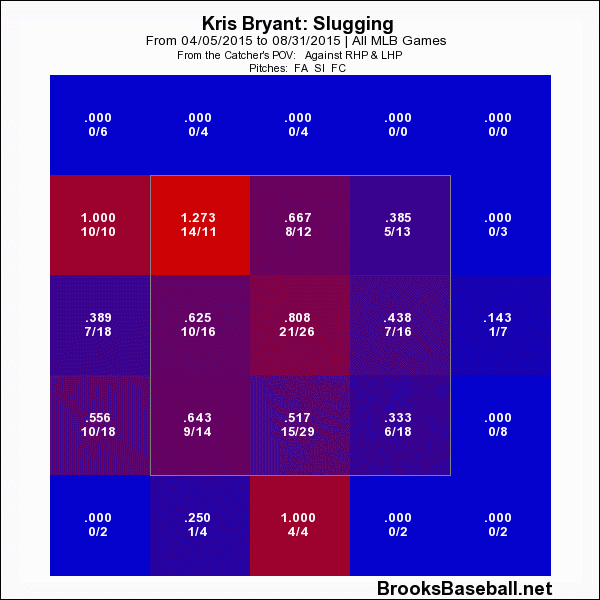 Bryant is well aware that he can do damage against fastballs in that part of the zone, and he rarely allows the chance to pass him by. Yes, he swings and misses quite a bit at fastballs in the zone, but he almost always swings, so while the frequency of swing-and-miss is high, so is the damage.

When I told Bryant that there were rumblings by some that he struggled with harder fastballs in the zone, he was a little surprised by that belief.

“I just feel like when you get that guy on the mound who’s throwing harder, you tend to be in a more heightened state of awareness,” Bryant told me. “Just more focused, I think, because you have to be: you don’t have enough time to react. I notice myself doing that—I don’t know if the results are there, but I feel more confident and more comfortable knowing that I’m more focused up there and I’m ready for whatever this guy’s throwing me.”

I told Bryant that I wasn’t sure what the numbers said, but I would get them and let him know.

The table below shows Bryant’s batting average and slugging percentage on every pitch categorized as ‘hard’—which I culled down to just pitches 88 mph and above in said category—that has ended an at-bat, along with the league average on those pitches.

Yes, the samples aren’t huge here, but from the data we do have, when Bryant puts a solid fastball in play he seems to crush it, especially those in the 94-98 zone, against which he’s hitting .327 with a .694 slugging percentage.

“I guess it’s just where the game is going,” Bryant said when I showed him those numbers. “Every guy is throwing 95-plus, so once you get in a routine of seeing that every day you feel more comfortable hitting that. Then when you get in the kind of outliers, of the 101s or 88s, it’s a little different because you’re not used to seeing that every day. Maybe that’s it: the routine of getting to see the 92 to 96.”

As my colleague Matt Trueblood recently pointed out, Bryant is facing the highest average fastball velocity in all of baseball. Trueblood concluded that this was likely due to the fact that four of the five teams in the NL Central (the Cubs being the fifth) are in the top half of average fastball velocity in baseball—the only division in baseball with four teams in the top 15 (“That’s a cool stat,” Bryant told me when I pointed this out to him). So the Cubs have seen a lot of velocity this seasonm and it’s likely that trend will continue as the season goes forward.

As Bryant told me, the way pitchers attack him is likely to continue to change: “It’s kind of a rollercoaster in terms of what they’ll throw me,” were his words. And as we’ve discovered, pitchers have gone away from the hard stuff in August, and Bryant has flourished. And while he may whiff at times, get used to it—while it may become less frequent, the swing-and-miss tendencies aren’t likely to drop below league-average levels any time soon. Bryant still crushes fastballs significantly better than most players in all of baseball, especially when they sit in the 94-98 mph range. So being in a division with more hard throwers could actually benefit Bryant in the long run.

At different points of the season, people have wondered how Bryant would fix his holes. Will he ever lay off changeups out of the zone? Can he hit breaking balls? Will he be undone by the low strike? Can he catch up to quality velocity in the zone? As every new question is asked, Bryant has not only made the adjustment to answer the question, he’s legitimately improved—and this has all happened in a little over four months. Imagine what he can do when he gets a few years in the big leagues.

What an amazing article!