It’s not exactly news that the Cubs are going to be playing in the Wild Card game in 2015. Even if they have only been officially assured a playoff spot for a little less than a week, it’s been virtually a lock for what seems like forever. And although the location of the game isn’t quite decided yet, the Cubs already know a fair bit about their October 7th date with destiny.

They know that the game will be played against the Pirates and will likely be in Pittsburgh (barring a complete Pirates meltdown against the Reds this week), and that manager Clint Hurdle plans to have Gerrit Cole on the mound facing off against Jake Arrieta. It’s no secret that Cole has been good against the Cubs, both this season and in his career. But getting specific rarely hurts. Check out some of Cole’s numbers: first his career stats, then his numbers against the Cubs in Pittsburgh:

And, start by start, what he’s done against the Cubs this season:

In his career against the Cubs, he’s only allowed two home runs. Any guesses as to which players hit them? Javier Baez and Arismendy Alcantara are the correct answers, which might surprise some readers. Cole has only been in Major League Baseball for the last three seasons, so the sample is fairly small, but most of the Cubs players have struggled against him: 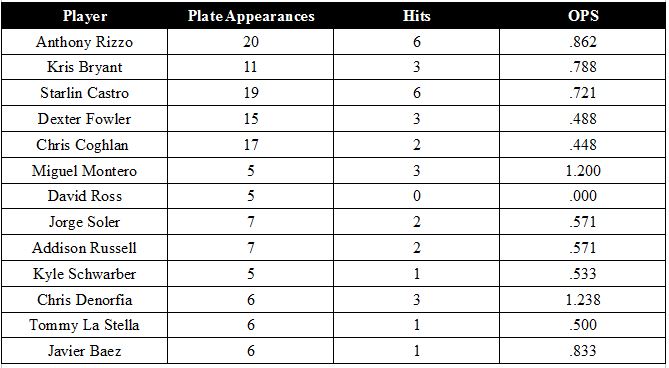 Looking ahead to next Wednesday evening, Joe Maddon will wrack his brain and pour over notecards that are dripping with analytics in an attempt to create the optimal lineup. So what might that lineup look like?

The nice thing about the 2015 Cubs is that a lot of players can play multiple positions, making lineup creation less of a tedious task and more of an art. I think we can settle on a few guarantees, in the form of Messrs. Rizzo, Fowler, Bryant, Russell, and Montero. The first four are everyday players that will be in the lineup no matter who is on the mound against them, and Montero makes the cut because he’s been catching Arrieta pretty exclusively in the second half—except when facing a tough lefty.

That leaves three positions on the field and a handful of guys left, including Austin Jackson, La Stella, Denorfia, Coghlan, Soler, Baez, Schwarber, and Castro. Before we can start digging in on the hitters, though, we need to look at Cole as a pitcher. 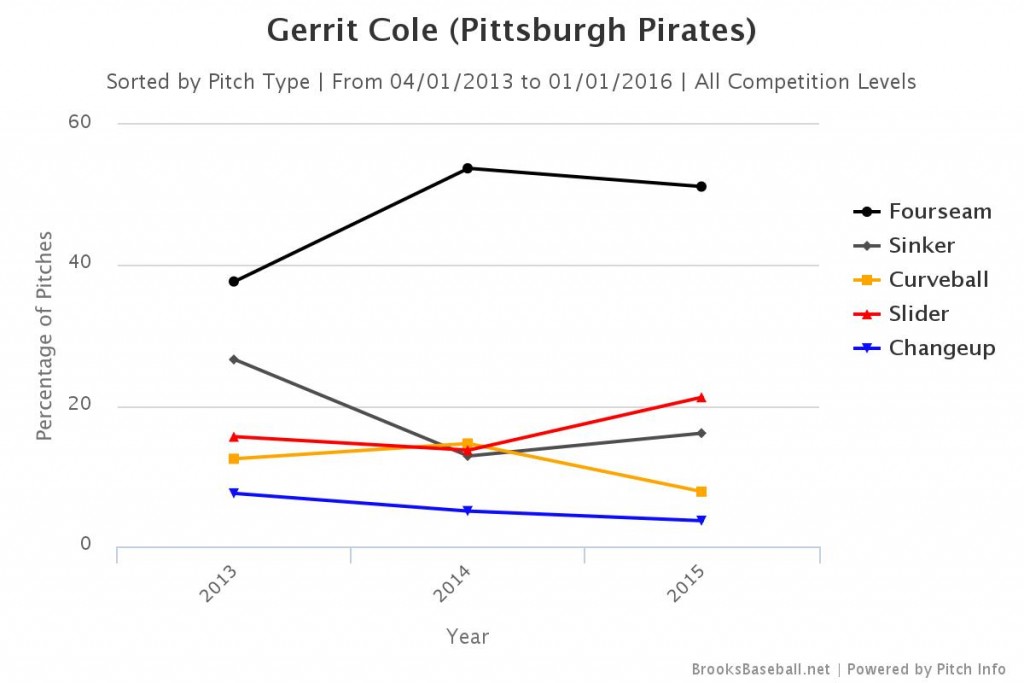 Cole throws his fastball most frequently, followed by his slider, sinker, and curveball (in order). For the purpose of these exercises, I’m going to focus on his fourseam fastball and his slider. The batting average against on his pitches has varied from year to year, but his fastball has been consistently excellent the last two years, and his slider has been a devastating pitch throughout his young career.

So that’s what Cole’s been up to. Before we go much deeper in hitter-by-hitter analysis, though, I think we can narrow things down just a bit. Jackson has never faced Cole, has a .655 OPS against right-handed pitchers in 2015, and until his last two games has really struggled in a Cubs uniform. He’s a quality defensive outfielder, though, so it makes more sense for the Cubs to have him on the bench, ready to pinch-hit against a lefty or be a defensive replacement late in the game. Denorfia, meanwhile, has a .686 OPS against right-handed pitchers over the course of his career, and—speaking more broadly—isn’t even a lock to make the postseason roster at this point. I think he’ll probably make the final cut, but Maddon hasn’t started Deno often during the regular season and I don’t think he’ll change that now.

La Stella, on the other hand, has received a decent amount of time in the field in recent weeks. He’s shared the time at second base with Starlin Castro, and when starting against righties he’s done very well, hitting .276/.338/.414 in 65 plate appearances. But La Stella lacks what Castro brings defensively, which puts him on the bubble.

Castro, on the other hand, has much better range than La Stella and has played well lately at second base. He’s also one of the Cubs’ more experienced hitters against Cole and has had some success against him (although, as is the case with so many other Cubs, this is in a small sample). If Castro had really, really struggled against Cole in the past, I could imagine leaving him on the bench. But that’s not the case, and when that data point is combined with the fact that he hit .426/.452/.750 with five doubles and five homers in 74 plate appearances in September, you have to give him the nod at second base.

We have two remaining spots in the batting order with Coghlan, Soler, Schwarber, and Baez left to fill them. Let’s take a look at Coghlan, who has been a fixture in the Cubs lineup all year but has struggled against Cole. I think it’s simply a poor matchup, based on some similar issues in pitch location. Cole gets an extremely high percentage of whiffs per swing in the low, right-hand portion of the zone—not all that surprising for a dominating right-handed pitcher with a wicked slider. 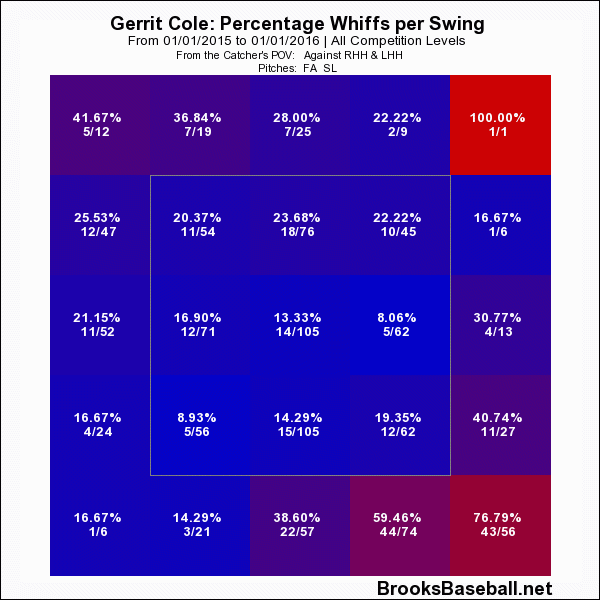 Now look at Coghlan’s whiffs per swing on fastballs and sliders from right-handers over the course of his career. In those same areas, Coghlan is awful at putting the ball into play. 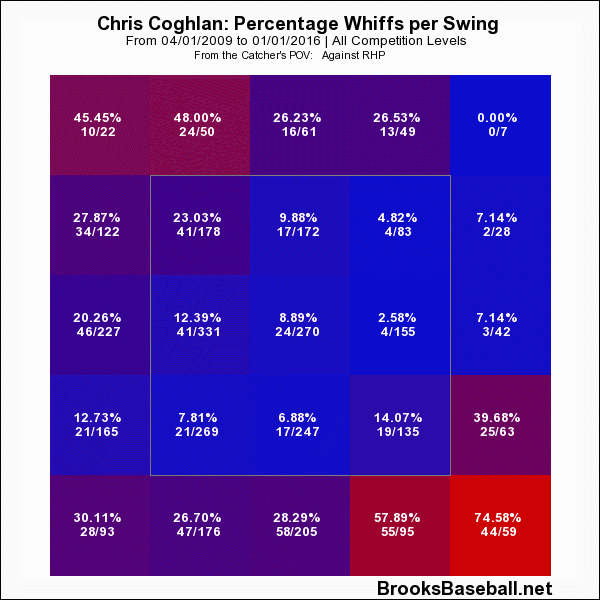 To compound the problem for Coghlan, he’s in a 0-for-his-last-16 slump at the plate. The 17 plate appearances against Cole may be a small sample, but this information, taken as a whole, leads me toward sitting Coghlan in the Wild Card game, at least while Cole is on the mound.

On to the next hitter. Joe Maddon has picked his spots with Soler since he returned from his oblique injury, starting him in just six games over the last two weeks. He’s hit three homers in that span, which is what stand out in my mind about him since he’s returned. But he’s also struck out 10 times in 23 at-bats, which is cause for concern in general, but especially against a high strikeout pitcher like Cole. Soler’s struggles this season have been well documented here at BP Wrigleyville, and I think the Cubs would be wise to play matchups with Soler in the playoffs.

Schwarber is another guy who I think should basically be a lock. Schwarber has hit for a ton of power against fastballs, sliders, and sinkers—which comprised roughly 80 percent of Cole’s pitches in 2015—including 13 of his 16 homeruns. You can start Schwarber in left field to get his bat in there, and if need be use a guy like Denorfia or Jackson later in the game for defense.

Baez is my wild card. I don’t have a ton statistically for Baez, besides the fact that one of his 10 career homers came off the Pirates’ ace. Picking Baez to start in the Wild Card game is far more about his defensive versatility than it is about his bat. Javy has been a wizard on defense in his short time with the big league club, and he’s already shown this at third base in Pittsburgh—remember that barehanded grab?

I’m tapping Bryant’s outfield abilities in this scenario, moving him out to right field to make room for Baez at third. Pittsburgh has that close wall in right that makes it one of the easier ballparks to play out there, and we’ve already seen Bryant handle himself there just fine—remember the leaping catch against the wall to rob Andrew McCutchen of a double?

My defensive alignment for the Cubs on October 7th against Gerrit Cole therefore looks like this:

The most important thing the Cubs can do right now is to focus their energy on getting to Pittsburgh healthy and ready to win. While the outfield defense may be a bit lacking with this defensive alignment, the infield defense is extremely strong. And with Arrieta forcing 55.7 percent of the balls hit into play off him hit on the ground—versus just 23.1 percent hit in the air—strengthening the infield defense makes a lot of sense. If Maddon agrees with me, and the Cubs perform as we expect they might, there’s a good chance they’ll be flying to St. Louis when they’re done in Pittsburgh.

All stats and information from Brooksbaseball and Fangraphs.