Top Play (WPA): The pivotal inning of the Cubs’ 96th win—a total which tied the 2015 club for their second-best record since 1945—wasn’t the inning in which the Cubs scored the game’s only run. Rather, it was the tense bottom of the eighth inning, where the Brewers threatened to score against Fernando Rodney. Prior to that point, it had seemed as if the Cubs’ eventual victory would come both inevitably and swiftly. As it turns out, the victory was indeed inevitable, but Hernan Perez did his best to make hearts beat a little faster in the eighth. In that inning, Perez single that put runners on first and third with one out against Rodney (+.185). Rodney figures to be an important bullpen weapon for Joe Maddon in the playoffs, but the changeup artist exhibited a sharp, troublesome decrease in the velocity of his two offerings on Saturday. 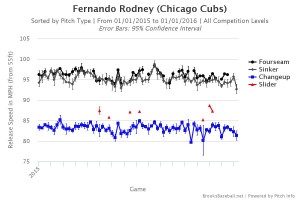 His changeup has been at 81 before, but his two-seam velocity of 92.65 was by far his slowest of the season, during which he’s averaged 95.19 on the pitch. If Rodney is going to be an effective option for Wednesday’s Wild Card game, he’ll need to have the giddyup on his fastball that he normally gets. That, or Pirates hitters will devour that pitch.

Bottom Play (WPA): Luckily for the Cubs, and for Rodney, he was able to escape the inning unscathed, thereby sending the game to the ninth. He tossed a perfectly executed changeup off the plate outside to Martin Maldonado, getting Maldonado to roll over the pitch to third base, where Kris Bryant stepped to his left, scooped it, and fired to Javier Baez at second, getting the second out of the inning. Baez received the throw well and spun the ball to first, a difficult throw in the dirt, but Anthony Rizzo picked it to record the final out of the eighth and bail out Rodney (-.327).

Key Moment: The Cubs simply couldn’t get to rookie Tyler Wagner, who turned in six sparkling innings of one-run ball for his last showing of the year. Luckily for the Cubs, Kyle Hendricks continued his recent dominance—throwing five perfect innings to start the game—and likely cemented his status as the Game 2 NLDS starter (should the Cubs make it to that round)

Because of their inability to knock Wagner around, the game’s key moment was a failed Cubs scoring chance against the righty in the fifth.

The Cubs loaded the bases on a David Ross walk, a Hendricks sacrifice, a Dexter Fowler infield hit, and a Kyle Schwarber walk, bringing the Cubs’ two best hitters—Kris Bryant and Anthony Rizzo—to the plate with just one out. Wagner struck out Bryant on four pitches, however, and battled valiantly against Rizzo, who fouled off five pitches before the fight finally came to an end, when Wagner was able to induce a groundout to first and end the Cubs’ most promising chance of the night.

Trend to Watch: The Cubs secured the best road record in MLB with their 47th victory on the road, besting the Cardinals’ mark of 45. That total also tops the 2008 club’s 42-win mark, which contributed to a season in which the Cubs won 97 games. With a win Sunday, the 2015 Cubs can tie that team for the best club record since 1945.

More importantly, however, is the Cubs’ ability to win on the road, with the likelihood of the biggest game of the season being at PNC Park on Wednesday night. If you’re worried about that night, let me say this: I think it’s important to remember this team, with their fun mixture of youth and “wisdom,” has ice water in its veins.

Coming Next: Coming into Saturday’s game, the Cubs had to win their two remaining games in Milwaukee and hope for two Pirates losses to Cincinnati in order to guarantee a home playoff game at Wrigley Field on Wednesday. So far, half of those requirements have been fulfilled: Pittsburgh dropped their game Saturday, shrinking their first Wild Card lead to a single game, that itself can be eclipsed Sunday.

In the season finale, Dan Haren (4.57 DRA/3.67 ERA/114 cFIP) will duel with fresh 22-year-old righty Jorge Lopez, who allowed three runs in five innings in his first major league start last time out. He features a four-seamer that sits in the mid-90s, a curve, and a changeup, plus a rarely used cutter.

With home field advantage in the Wild Card game on the line, Joe Maddon is likely to pull out all the stops against Milwaukee—expect some interesting bullpen management if the game is close late. The Pirates play at the same time against the Reds, so scoreboard watching will be inevitable.

Tags: Recap |
Zack Moser
Zack is a history graduate of the University of Illinois, Urbana-Champaign, currently living in Boston. His writing has been published in Black Ball Journal, Cuban Baseball Legends: Baseball's Alternative Universe, and Baseball Prospectus. You can find his stranger thoughts at BP's Short Relief.
read more from Zack Moser