It was a hard performance to top, and while it’s not clear that Rizzo did that this year—just take a look at the stat line above—it is true that he matched his 2014 performance in every meaningful way in 2015. That’s an extraordinary accomplishment, and it made Rizzo, at age 25, the 14th-most valuable position player in the major leagues.

So here’s your short-form year in review for Rizzo in 2015: he was a superstar for the second year in a row. That makes this profile, in one way, a little boring. Rizzo was very good this year, he was very good last year, and he should be very good next year as well. If you wanted to, you could stop reading right here and you’d have 90 percent of what you need to understand about Rizzo going forward. But I don’t recommend that.

That’s because there’s two things I’d like to briefly note about Rizzo’s performance last year, and both might play into how he can be expected to perform in 2016. First, take a look at this chart: 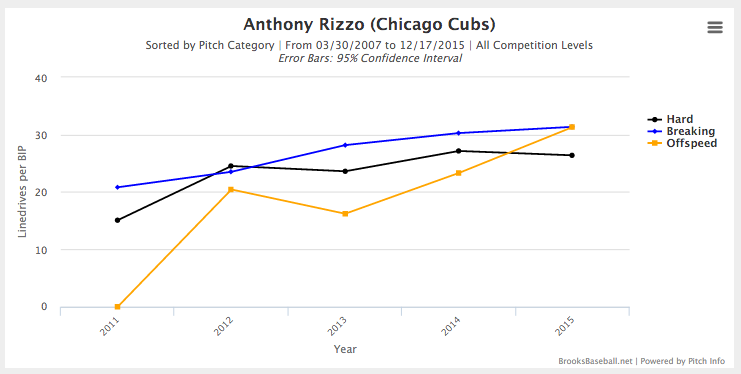 What you’re looking at is Rizzo’s line drive rate over the course of his five-year major league career. The first thing you notice is a general upwards trend: that’s normal, and makes total sense as Rizzo approaches his peak years and establishes himself as an annual All-Star threat.

The second thing you notice—and this is the important one—is that while Rizzo’s LD/BIP rate actually stabilized quite a bit in 2015 on hard and breaking pitches (suggesting that he’s grown into maturity as a hitter), his ability to square up offspeed pitches improved dramatically, rising by over 30 percent from its 23.3 percent rate in 2014. And it’s not the first time Rizzo’s improved his LD rate on offspeed pitches by a huge amount: between 2013 and 2014, he improved his mark by 40 percent. In two years, the improvement is over 80 percent, or nearly double. Point is, it’s a lot.

How did that happen? Well, I’m #notascout, but I ran this idea past a pro scout and he didn’t reject it out of hand (which, of course, is not to say that he endorsed it). So here’s what I think, for what it’s worth: Rizzo (like most hitters) used to get ready for the fastball and then slow up his swing to drive an offspeed pitch, if he identified it. Because his swing was relatively long in 2013 and before, though, he had to start his swing early and then actually literally slow the swing down in order to hit the slow pitches, which (presumably) lowered his line drive rate on those pitches, because he couldn’t fully drive the ball.

In the past two years, though, he’s shortened his swing mechanics significantly, which allows him to wait to start the swing until he identifies the pitch as offspeed, which consequently allows him to improve the line-drive rate as you see above. I’m not sure how much more he can or should shorten his swing, but it’s a good change and one that should be durable going forward. So that’s one thing to consider, and a reason to be optimistic about his future. The opposite is true of another thing: 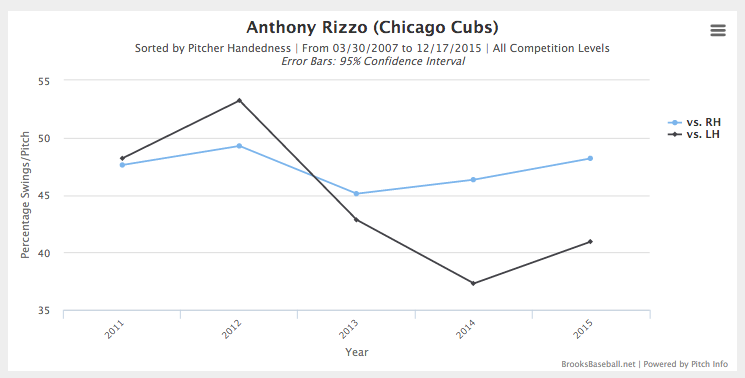 What you’re looking at is Rizzo’s swing rate on pitches against lefties and righties (black and blue, respectively). And what you should notice is that while Rizzo’s swing rate against righties has remained basically consistent year-to-year, his swing rate against lefties has dropped dramatically as he’s improved over the course of his career, and started rising again only this year (from 37 to 41 percent). That’s not a huge change, but it’s worth keeping an eye on: refusing to swing against lefties too much has allowed Rizzo to wait for pitches he wants to drive, and work to develop his ability to distinguish between strikes and driveable strikes. I’m not too worried about this change now, as it could just be random noise, but I’ll be watching it in 2016.

Looking Ahead: Speaking of 2016, there’s no compelling reason to think that Rizzo will be anything but an excellent baseball player next year. Here’s, for example, his PECOTA projections for the next five years:

22 WARP over the next five years? Sign me up. Worth noting, though: Rizzo has exceeded the 5.0 WARP mark each of the past two seasons, and he’s entering his prime years now with no obviously debilitating weaknesses as a hitter. Sure, there are things he can improve on, and no approach is ever finished, but there are reasons to be optimistic about Rizzo’s ability to beat those projections.

And it’s worth noting this: A non-negligible portion of Rizzo’s contributions to the team come off the field and in the clubhouse, where he’s the unquestioned leader of this young and talented team. If 2014 was the season Rizzo became that leader, and 2015 was the year he led the team into contention, 2016 might be the year where he takes full control of his team’s response to adversity and success alike. That kind of development is difficult to report on without access, and we look forward to bringing you some of it at BP Wrigleyville over the course of the next season. For now, rest easy with the knowledge that Rizzo looks very, very strong going into 2016.

Tags: 2015 Player Profile, Anthony Rizzo, Offseason, Player Profile |
Rian Watt
Follow @rianwatt
Rian is the editor-in-chief of BP Wrigleyville, an author at Baseball Prospectus, and a contributor at VICE Sports and FiveThirtyEight. He's based in Boston, and misses Chicago every day.
read more from Rian Watt