It has seemed to me for a number of years that Major League Baseball is getting younger. Could you imagine, just a few years back, a hot prospect promotion engendering more fan interest than a marquee free agent signing? It happens these days. I recently wondered, though, whether the league’s greening is a phenomenon that shows up in data beyond the anecdote, or whether my opinion is being colored by the youth movement which has been in process for the last half-decade at Wrigley Field.

In an effort to determine whether the league is actually getting younger, I analyzed the average age of Major League Baseball players over the past 50 years, and compared the trends I found there to the aging patterns for the Cubs, alone.

Here’s what I found: that the current period appears to be a continuation of a long trend that can be fairly easily explained by medical science—which is that players play longer, and into later years, today than they did in the ’60s and ’70s. The data is skewed, however, due to a period of time from 1997 to 2007 when players received extra (ahem) assistance from medical science. That makes the short-term trend, yes, downward. 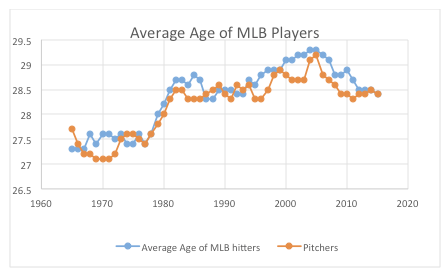 In 1965, the average age of a major league hitter was 27.3 years old, and that of a pitcher was 27.7. Those values fluctuated slightly from year-to-year with a gradual upward slant until 1997, when statistically significant increases were common, driving the average ages for hitters and pitchers as high as 29.3 and 29.2 respectively in 2005. As shown in the chart, the shape of the increase in age of pitchers is similar to that of hitters, but overall, hitters stayed in the game longer than did pitchers, the reasons for which likely have to do with arm injuries.

Assuming that the “steroid era” will indeed prove to be an outlier on the chart, the average age of hitters in MLB does seem to be in decline back to normal (post 1980) levels, though it remains to be seen whether this is just a reversion to the mean. To this point, the average age has simply retraced the questionable increases seen from 1997-2007 and has found the level that has been experienced most frequently since 1980 (28.5).

Because the focus on young players has been so obvious at Wrigley Field, I also analyzed the average age of the Cubs players over the same period of time and noticed some undeniable trends.

The aging of the Cubs was especially egregious during the period of 1998-2004, when the Cubs hitters averaged more than 30 years every season. During the same time period, the Cubs positional players exceeded the average age of the rest of the league by an average of 1.5 years. 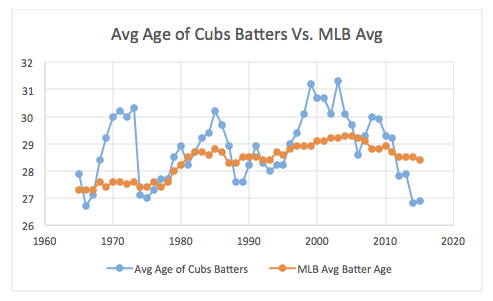 Since the arrival of the Epstein era, though, the reversal has been dramatic. Each of the last four seasons has seen the Cubs players end up younger than league average, and the differential in average age as compared to MLB has become significant, especially for the hitters. Prior to the arrival of Theo Epstein, only four times out of 46 seasons had Cubs hitters been younger than the average age of MLB hitters by more than 0.5 years. Each of the last four seasons has seen that mark surpassed, with 2014 and 2015 being the largest such figures posted at 1.7 and 1.5 years below MLB average, respectively.

In 2008, Cub hitters averaged 30 years old, and the pitching staff averaged 29. In 2015, the pitchers had roughly the same average age, but the average age of the hitters was down to 26.9 years old. The Cubs don’t have the youngest team in baseball—their pitching staff was actually one of the oldest, on average, bringing them up to the 8th youngest team in MLB, while their positional players check in at 3rd youngest.

This front office has made it clear that they will continue to blend young talent with established veteran leadership. The older veterans play an important role in teaching the young talent how to be professional ballplayers, but their presence greatly impacts these average age figures, and masks how young this core truly is. For example, Replacing David Ross with Willson Contreras would bring the average age of the hitters down by over 1 whole year!

Even though the core has come to the majors together, for the most part, it is quite likely that the average age will not begin to creep up significantly for a couple of years. Older players such as Ross, Hammel, Lackey, and Montero will likely not be a part of the team longer than two seasons, and it is possible that they will be replaced with homegrown talent, further de-aging the roster.

5 comments on “Increasingly, Youth Being Served in Chicago”

Have to disagree with your read on the first graph. Upward spike in 77-81 is much more significant than even steroid era. Since (as you said, stripping out the steroid era a bit), age has been flat. I just don’t see the linear trend that you do.

I get your point, and it’s valid regarding the fact that from 1978 to 1981, one full year of average age was added to the league and maintained essentially through today. If we strip out the steroid era, though, the graph is certainly not flat from start to finish… just flat from 1981 through today. Perhaps that is indication of the league getting younger as sports medicine should be lengthening careers, but instead younger players might be countering the increases.
We can’t disregard the 1978-1981 data, though… it happened, and it causes the graph to look the way it looks. Is it more significant than the steroid era? Of course, because I assign very little value to the steroid era in evaluating average player age.
I attribute the spike from 1978-1981 to the proliferation of Tommy John Surgery, by the way, though that is only a theory.
Thanks for reading.

I agree that is only a theory but also it is scientific theory . Most of the baseball fan can see younger generation . Thanks for this great and informational post .