Two years ago, Javier Baez was not a good major-league hitter. Over 229 plate appearances in 2014, he put up a .169/.227/.324 triple-slash line, with nine home runs and a glaringly awful 41.9 percent strikeout rate. That’s really, really bad. But things got better. Last year, although he hardly reached his ceiling, it’s fair to say that Baez turned things around, slashing .324/.385/.527 at Triple-A Iowa to re-establish his value and then returning to the big-leagues at the end of the season to post a .268 TAv over 80 plate appearances in Chicago.

So far, so good, although there’s obviously still lots of work ahead Baez. So what, if anything, changed between the two seasons? The full answer is this: probably a lot of things, most of them mechanical (and therefore beyond my knowledge). The more limited answer is this: Baez stopped swinging at low pitches quite so often in 2015, and that allowed him to keep his eye-level consistent and make the most of his long swing. That’s a lot of moving parts (hey, just like his swing!), so let’s walk through this, step by step, and talk about why each piece is important. Here’s a chart of Baez’s swing rates in 2014: 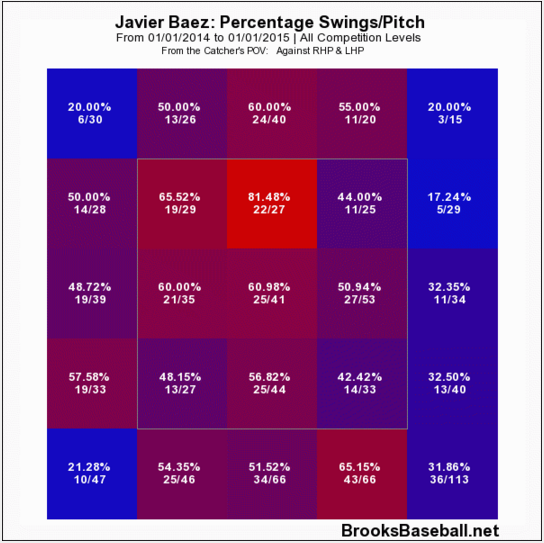 What you’re seeing here is a hitter who thinks he can hit everything. (He can’t. Remember that triple-slash line?) He was pretty good at laying off the outside pitch in 2014, but absolutely chomped at the bit at anything in the center of the zone or inside, be it low or high. And the thing was, he couldn’t hit all of those pitches equally well. Here’s what he did against them that year: 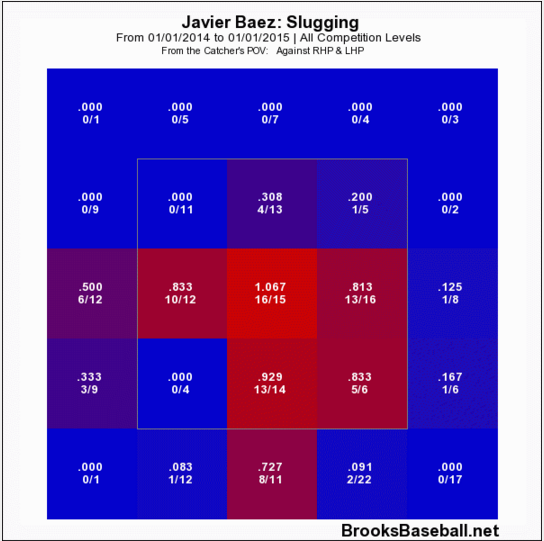 Look at that big blue row at the top of the image. That’s really good news if you’re a big-league pitcher trying to get Baez out. Here’s what pitchers knew in 2014: Baez was pretty darn good at doing damage in the middle of the zone, on the occasional inside pitch, and on pitches straight and low, but was also absolutely atrocious at doing real damage on high pitches. And (and this is the key part) Baez swung at everything. That allowed pitchers, who didn’t have to be wary of his power up in the zone, to use that “safe zone” to change eye levels constantly on Baez, going first down to start the sequence and then up to finish him off. Baez, then, was constantly on the defensive and in a position where he was guessing the location pitch by pitch.

Now, changing eye levels isn’t the hardest thing to deal with if you have a short swing and can adjust your swing path mid-pitch. But when your swing is as long and powerful as Baez’s was in 2014 you can’t be guessing, and you can’t have an inconsistent eye level. Your swing has too much force in it to change path mid-fire, which means that you’re committed to whatever you guessed at in the first place. So if pitchers know you’ll swing at almost everything, and they know you’re unable to do much damage up, and they know that you’re in your head guessing pitch location, you’ve got a recipe for disaster. And, indeed, disaster is a good way to describe Javier Baez’s 2014.

In 2015, though, something changed. Here are Baez’s swing rates on pitches last year: 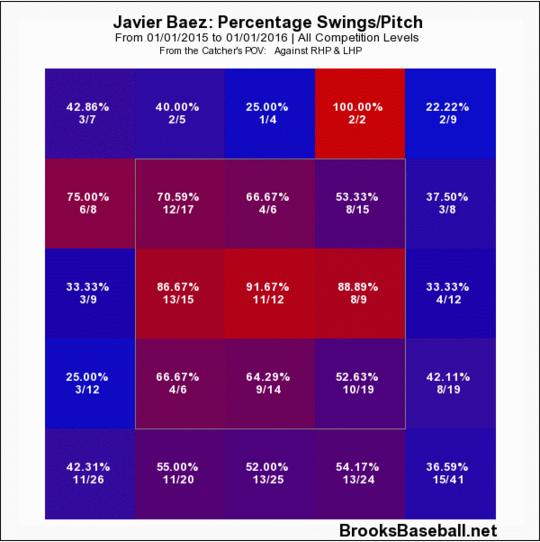 Remember all that red from the bottom of the 2014 chart I showed you? It’s purple in the 2015 version. And all that red from the left (inside) side of the 2014 chart? It’s blue now. Baez—in a small sample, of course—still had a tendency to swing at pitches up, especially up and away, but he became far more disciplined when it came to pitches inside and down in the zone in 2015. That, in turn, forced pitchers—wary of walking the young Puerto Rican—back into the zone. And that is where Javy Baez’s swing has a unique potential to do damage.

Now, part of this is mental: Baez had to learn not to swing, and probably worked long and hard on his pitch recognition before unleashing his swing to do just that. The Cubs have software (yes, literal software) that helps with that, and I’m sure he made use of it during the 2014-15 offseason. But part of the improvement probably also has something to do with Baez’s swing mechanics, which were noticeably shorter in 2015, and allowed him to start his swing later than he had in 2014. That, in turn, allowed him to stop guessing quite as much and actually lay off mid-pitch when necessary. Hence, the results above.

Now, that’s not all good news—the shorter swing path took away some of Baez’s power at the bottom of the zone—but it put him in a position where he was facing far fewer 0-2 counts than before. This allowed Baez to do much cleaner damage in the middle of the zone. To wit, Baez’s slugging chart from 2015: 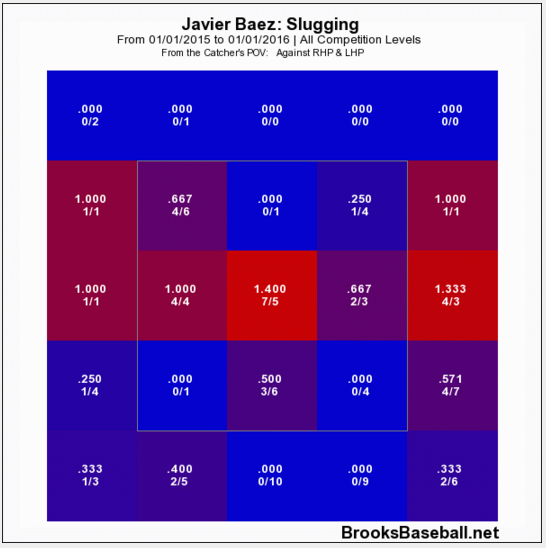 Again, this is a small sample, but the pattern is fairly clear. Gone is the power down in the zone, but up is the slugging overall. That’s good news, and it’s contributed to a fairly optimistic PECOTA projection for the young man in 2016:

I don’t fully buy that projection (I think he’ll get more on the order of 350 plate appearances, given the composition of the roster, and perform more in the .270 TAv range), but I don’t think it’s crazy, either. The degree to which I don’t think it’s crazy will be determined by the degree to which Baez is able to continue to improve his pre-pitch recognition skills, and lay of the low pitch. And so as you watch him take the field in spring training, keep an eye on that ability in particular. His swing is still long, comparatively speaking, and his ability to do damage in his sweet spot will be directly related to his ability to force pitchers back into the zone, and into a consistent eye slot, by not swinging when they throw pitches down. That’s something he improved on last year, and it’s something he’ll need to keep up in 2016 if he wants to succeed.

Tags: Down in the Zone, Eye Level, Javier Baez, Swing Path |
Rian Watt
Follow @rianwatt
Rian is the editor-in-chief of BP Wrigleyville, an author at Baseball Prospectus, and a contributor at VICE Sports and FiveThirtyEight. He's based in Boston, and misses Chicago every day.
read more from Rian Watt

3 comments on “Javier Baez, Eye Level, and Guessing at the Bottom of the Zone”

If Baez’ glove and versatility may make him the next Zobrist, his superior speed, power, and arm strength–all at a much younger age–may mean–SHOULD MEAN– he’ll be even greater than the great Zorilla.

Rian, I love your writing. Great article. Very insightful. BP did a great job in bringing you to their team.

Well, this made me smile. Thanks, man.