In the summer of 1998, the baseball world was captivated by a steroid-assisted home run race, and six-year-old Kris Bryant was in his second season of serious training with his dad. A student at the Ted Williams school of hitting since age five, he was already swinging for the little league fences with the advice, “hit the ball hard and hit it in the air.” We can only imagine the impact, if any, of seeing big leaguers crushing 500-plus foot bombs with unprecedented frequency. But we do know he was a child of the power hitter era, and his natural ability developed into an uppercut swing tailor-made for extra bases.

17 years later, that swing had become an undeniable thing of beauty. Producing Rookie of the Year numbers and generating the majors’ longest blast of 2015 with an exit velocity of 111 mph, Bryant’s approach has certainly been working. Among teammates, his slugging percentage of .488 last year was second only to that of fellow All Star Anthony Rizzo. So the recent announcement that he had worked on flattening his swing to cut down on his nearly 200 strikeouts was a bit of a surprise, especially considering comments he made late in the season.

With a 30.5 percent strikeout percentage and a contact rate of only 66.2 percent as of September, Bryant explained, “Strikeouts are part of my game, and they always have been… Sometimes strikeouts are good because you are working the count and making starting pitchers throw more pitches. I guess it’s easy for people to look at the strikeout numbers and complain. I don’t think about it too much.”

Apparently, though, the offseason provided time for reflection. In an era when steadily rising strikeouts seem to have become an entrenched and accepted part of the game, it appears Kris Bryant is no longer viewing them as a necessary evil. But what effect does a flatter swing really have, and what might tinkering with his mechanics mean for the Cubs?

There’s a reason that strikeouts, as Bryant admitted, had always been part of his game. Ted Williams called hitting a science, and actual physicists agree. The steep uppercut we have often seen from Kris Bryant is a home run swing, commonly understood to maximize lift and power at the expense of high contact rates. Professor of Physics and baseball enthusiast Alan Nathan conducted a detailed analysis to elucidate this tradeoff and the strategic choice a batter makes with each cut.

Dr. Nathan’s discussion of the optimal swing centers on the attack angle (swing plane) and offset, or the vertical distance between the centers of the ball and bat at contact (basically, where the bat hits the ball). His calculations say a ten degree attack angle and an offset of only 0.5 inches (hitting pretty much squarely) optimize the level swing and result in a high BABIP. The ideal parameters for hitting a ball out of the park, however, are a 24 degree attack angle and a 1.05 inch offset (lifting the ball from underneath). This is the uppercut home run swing.

Clearing the fence with this approach is three times more likely than with the level swing, and a small error in aim will often produce a line drive as consolation. Hence, Nathan poses the question, why not always go for the home run swing? This seems to be the logic of many of today’s hitters. The answer lies in timing, and Nathan quantifies how very forgiving a level swing is compared to a home run swing for timing errors.

With a level attack angle, contact that occurs a few milliseconds late will still happen at the correct offset. This is why contact hitters generally have flatter swings. But with the steep angle of the home run swing, that same timing error makes a huge difference in offset, resulting in a lot of poorly hit or altogether missed balls and creating an on-base probability close to zero. In the eyeblink that can make or break an at bat, forgiveness is crucial.

Hence, the flatter swing is definitely the best bet for getting on base with frequency. Home runs should be less likely, but so should strikeouts. Nathan even suggests that a compromise may be struck with an intermediate attack angle that is more conducive to the long ball but also more generous on timing. Perhaps this balance is what a slightly flattened Kris Bryant swing would aim to accomplish.

The model predicts an average player’s expected outcome with a given swing. However, the game’s greatest hitters have managed to outperform these probabilities and hit for both contact and power. Among elite players, the tradeoff effect of the swing path on the ball’s flight may be considerably less severe. Nathan assures us that level hitters, “…still hit a lot of home runs if the bat speed is high and the aim is good.” In his last MVP season, for example, Albert Pujols hit 47 home runs and struck out only 64 times.

Baseball Prospectus scouting staffer Adam McInturff, drawing on player development and scouting experience with four major league teams, weighed in on Bryant’s unique profile and why he may be headed toward these elite ranks. McInturff agreed that an average hitter lacking Bryant’s raw power (evidenced by his batted ball distance and exit velocity) would tend to suffer from the physical trade off Dr. Nathan described, having to sell out his swing and contact rate for power.

But the game’s best hitters don’t need to necessarily rely on the home run swing to hit home runs. Referring to greats like Pujols and Miguel Cabrera, he explained, “…they actually have very ‘contact oriented’ swings, they just generate such incredible power, exit velocity, and backspin that they are able to hit homeruns from a ‘short’ stroke to the ball.”

As for Bryant, McInturff can envision him developing into a player with it all: high batting average, on base percentage, and power (though, as with all development, this is far from certain and not a prediction). A flatter swing with a shorter path to the ball, in his mind, would only help that. Far from cause for concern, he responded to the proposed swing adjustment with: “I do not think Kris Bryant would suffer tremendously if he were to sacrifice a little power for a much more efficient bat path. He has so much power that he shouldn’t really focus on it—it will come out naturally… it isn’t outrageous to say ‘this can be both a top-caliber hitter for average and power.'”

Last year that power did come out, with the majority of Bryant’s 26 home runs easily clearing 400 feet. His shots tended to be no-doubters. If a slight swing adjustment takes a little distance off the flight path, there should still be plenty to spare: 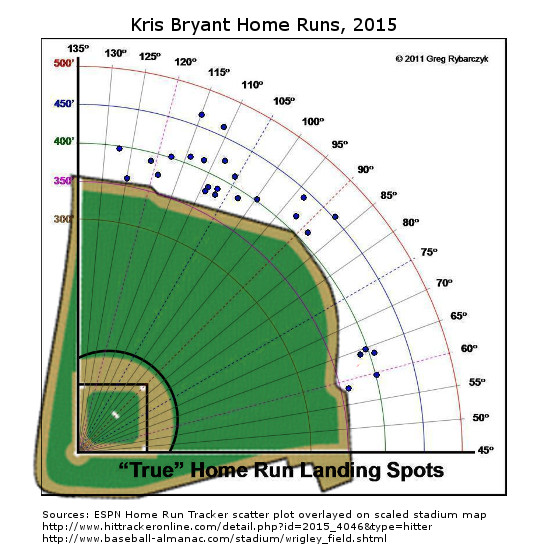 All indicators point to Bryant being able to do more with a swing than your average player. If the Cubs can reasonably expect the long balls to come anyway, prioritizing fewer strikeouts could be a very good sign for 2016. Last season, Cubs batters collectively put up the most strikeouts in baseball, with Bryant responsible for the lion’s share. Winning 97 regular season games and an NLDS in the face of this inglorious distinction gives some credence to the modern notion of the destigmatized strikeout. It’s supposedly just an out like any other. But being the worst in a category that has been plaguing the sport with unprecedented rates over the past decade needs to be addressed.

Former Cubs manager and current Royals hitting coach Dale Sveum is trying to buck the trend of record high strikeouts being acceptable to hitters: “I had somebody five years ago say, ‘What’s the difference between striking out and hitting a ground ball to the shortstop?’ What kind of mindset is that? I’ve never seen a strikeout hit the outfield grass. I’ve never seen somebody make an error on a strikeout. I’ve never seen a strikeout go over the fence. Making contact is huge. You try to bring back the feeling we all had when we struck out in Little League. It is a big deal.” This philosophy contributed to the league lowest strikeout rate for the Royals in 2015.

Kris Bryant’s eagerness to improve after such an impressive debut season is right in keeping with the cultural changes we are seeing throughout the Cubs organization. In pursuit of the ultimate goal, reducing strikeouts is another path to finding an edge, another way to turn a certain out into an on base opportunity. It appears, then, that adjusting Bryant’s swing could be all upside for the Cubs. Knowing they have a special player with the ability to launch the ball from nearly any angle, they can and should ask more of their third base slugger.

It’s time to move beyond the all-or-nothing hitter’s mindset that was at least partially inspired by the false home run heroes of Bryant’s youth. Kris Bryant is ready to take his game to the next level. In trusting his raw power and focusing on contact first, the Cubs may end up with a new legend at the plate who can do it all – and still seem to defy the laws of physics with one swing.

1 comment on “Harnessing the Power: Kris Bryant’s Next Level”

In a radio interview today, Theo Epstein stated one factor bringing about Bryant’s new swing approach is that he was fouling off a higher percentage of mistake pitches than whatever normal would be, and there’s an opportunity there for even more power with a slightly more level swing.