Soon, we won’t have to do this. Soon, there will be actual baseball, and actual results to look at instead of (or more likely, in addition to) the projections. It’s still March, though, so I’m still spending a lot of time over at the Depth Charts, trying to get a feel for how this season might unfold. For the Cubs, there’s not much to complain about–the Charts for position players are basically a sea of green, indicating well above-average expected performance at almost every position, and those for the pitchers aren’t much different.

If there’s one bone to pick, it comes at the very end: the closer. The Cubs’ projected 0.5 WARP from the position ranks 21st leaguewide, a less-than-inspiring figure for a team so strong elsewhere. That projection rests completely on Hector Rondon and his 3.92 DRA, but the pitcher second in line for the job, Pedro Strop, comes away with an identical 0.5 WARP/3.92 DRA projection. For both pitchers, that would represent a pretty substantial step back from their recent performance. Why doesn’t PECOTA believe in Strop and Rondon?

First, a sanity check. It’s worth keeping in mind what exactly we’re talking about. The middle relievers in the Cubs bullpen rank a much healthier 9th on the depth charts, confirming Cat Garcia’s point from February: there are a number of good relievers behind Strop and Rondon should either or both of them falter. These are bullpen projections; there are always going to be big error bars, they’re rarely going to be spot on, and the difference between projected and actual performance is rarely going to make or break a season. This piece is motivated by curiosity, not outrage. 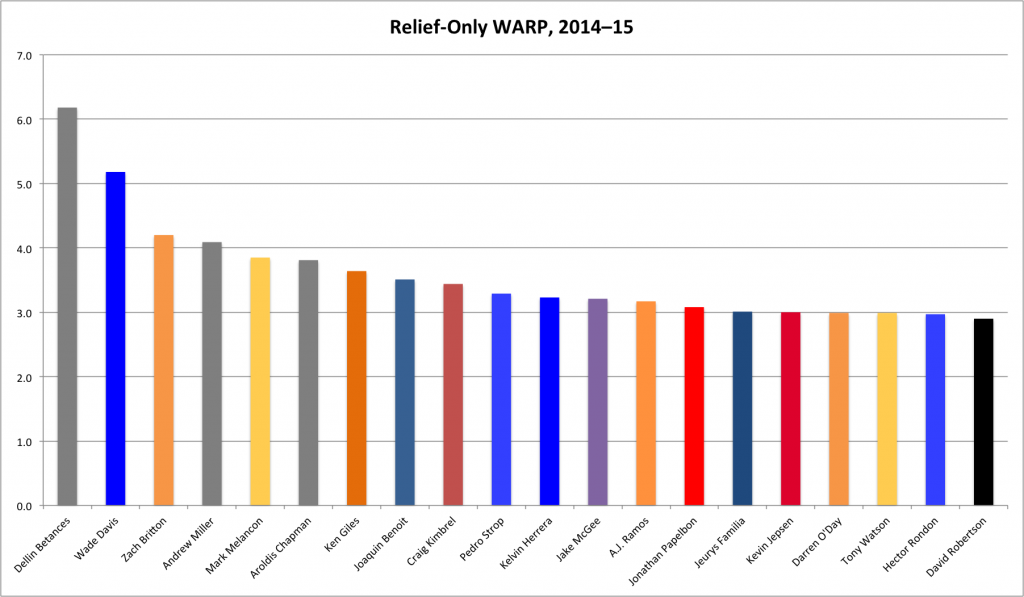 The first thing this chart showcases is just how absurd Dellin Betances has been for the Yankees over the last two years. His 6.2 WARP beats Wade Davis in second place by a full win. He is both insanely durable (174 IP, the most over that span of any pitcher without a start) and insanely good (1.77 DRA, second-best among pitchers without a start and at least 10 IP). He’s not the point of this post, but I can’t look at that chart without mentioning him.

Anyways, behind him, there’s Davis, and behind Davis, there’s Zach Britton, Andrew Miller, Mark Melancon, Aroldis Chapman, and Ken Giles, and behind them, there’s a whole slew of guys who have been quite good and mostly indistinguishable from each other. Rondon is in there, as is Strop, along with Craig Kimbrel, Kelvin Herrera, and David Robertson. Just outside the top 20 are names like Pat Neshek, Tyler Clippard, Kenley Jansen, and Luke Gregerson. This is the great-but-not-quite-excellent tier of relievers, and both Rondon and Strop are legitimate members.

So why the pessimistic PECOTA for both of them? For this tier of 17 relievers (excluding Strop and Rondon) with between 2.5 and 3.5 WARP in the last two seasons, the average projection is 0.6 WARP, with a DRA of 3.88. In that light, the projections for Rondon and Strop seem totally reasonable. In part, this has less to do with the pitchers themselves and more to do with PECOTA’s approach to relievers. They’ve been good, no doubt, but both Strop and Rondon have a career innings total roughly equal to what a single starter accumulates in a year or two. Given how variable reliever performance is, and how short the track records of Strop and Rondon are, a heavily regressed projection makes a lot of sense. We can go a little more into the weeds than that, though.

There’s a couple reasons in there to think PECOTA is underestimating Strop. First, his career BABIP is .269, so you might be able to talk yourself into thinking .286 is too aggressive of a regression for him. His whole career has been less than 300 innings, which is probably not enough to conclude that he can control the quality of contact he allows better than the average pitcher, so that’s not a conclusion I’d be confident in, but it’s not inconceivable.

The other perplexing factor is the jump in HR rate. Like BABIP, this is something that can fluctuate a lot, but Strop’s ground ball-heavy profile, career HR/9 of 0.5 (quite good), and 2015 HR/FB rate of 11.5 percent (not very good) suggests that his 2015 figure wasn’t driven by luck, or not exclusively. PECOTA knows a lot of things I don’t, but this is a place where I’d trust my gut more, and say that the projected jump up to a 3.92 DRA is too large. If that doesn’t convince you, consider that PECOTA’s 90th percentile projection for Strop–not quite the best-case scenario, but the level he’s only got a 10 percent chance of reaching–is a 2.79 DRA and 1.2 WARP, compared to a 2015 DRA of 2.68 and WARP of 1.6. In other words, PECOTA thinks Strop’s chance of replicating his 2015 is in the single digits, never mind repeating it. That strikes me as pessimistic.

I find all this not as difficult to believe, though, in light of Rondon’s early history with the Cubs, after being acquired as a Rule 5 pick from the Indians, post-Tommy John and post-fractured elbow. In his first season with the team (2013), he posted a whopping 4.1 BB/9 in 54 innings, striking out a not-great 7.2/9 and giving up 1.0 HR/9. It seems like half of the Cubs pitchers are reclamation projects from other teams that have turned out surprisingly well, and Rondon definitely fits that mold.

How you feel about Rondon’s projection, therefore, likely depends on how you feel about pitching coach Chris Bosio. If you think he’s a wizard, who can take any team’s castoffs and turn them into elite relievers and Cy Young winners, this projection probably seems ridiculous. It still remembers Rondon’s 2014, and his time spent in the minors, but under this viewpoint, that was pre-Bosio, and therefore not very relevant to who Rondon is today and will be in 2016. If, on the other hand, you think the Cubs have done a good job of identifying bounceback candidates, but gotten pretty lucky overall in how well they’ve turned out, you probably find this projection a lot closer to reasonable.

PECOTA is, emphatically, in the second category–it doesn’t know a thing about Chris Bosio, and, as is warned in its description, it “can tend to appear bullish on players coming off a bad year, and bearish on players coming off a great year,” due to a memory generally longer than that of you or me. Its memory, and general uncertainty towards Rondon, is reflected in his percentile forecasts. Unlike Strop, PECOTA thinks there’s a possibility he improves on his 2015; his 90th percentile projection has a DRA of 2.92, 0.27 less than his 2015 DRA. On the other hand, PECOTA thinks there’s a chance he self-destructs; his 10th percentile projection is a 5.24 and -0.4 WARP. There are universes in which Rondon’s 2016 looks like the former, and universes in which it looks like the latter.

At the end of the day, PECOTA is almost certainly right that Strop and Rondon aren’t likely to replicate their 2015s, both of which were excellent. I think you could very easily conclude, however, that it’s too bearish on both of them, for different reasons. Either way, it’s important to remember how little they need to produce to be worth their price tags. Strop is exiting his third winter in which he had the option of arbitration, and agreed to a deal worth $4.4m; Rondon is exiting his first such winter, and his deal is for $4.2m. Think back to some of the names in the same tier as these players over the last two years. The Red Sox just shipped a lot of young, talented prospects to San Diego in exchange for three years of Craig Kimbrel at $12m per year; Jonathan Papelbon is closing out a 5-year, $63m contract; Darren O’Day signed a 4-year, $31m contract this past offseason. PECOTA might not think Rondon and Strop are as good as they looked in 2014 and 2015, but they don’t have to be to provide great value to the Cubs.