The Cubs have spent the first eight games of the season generally wreaking havoc on their opponents. With the Orioles dropping their first game yesterday, the Cubs are now tied with Baltimore for the best record in the league thus far, at 7-1.  With the exception of a 3-2 loss to the Diamondbacks involving lots of stranded runners and a late-inning comeback, Chicago hasn’t dropped a game, and every win has come in convincing fashion. Through eight games, they’ve scored 56 runs and given up only 20, for a run differential of +36 (4.5 R/G). That’s pretty good! 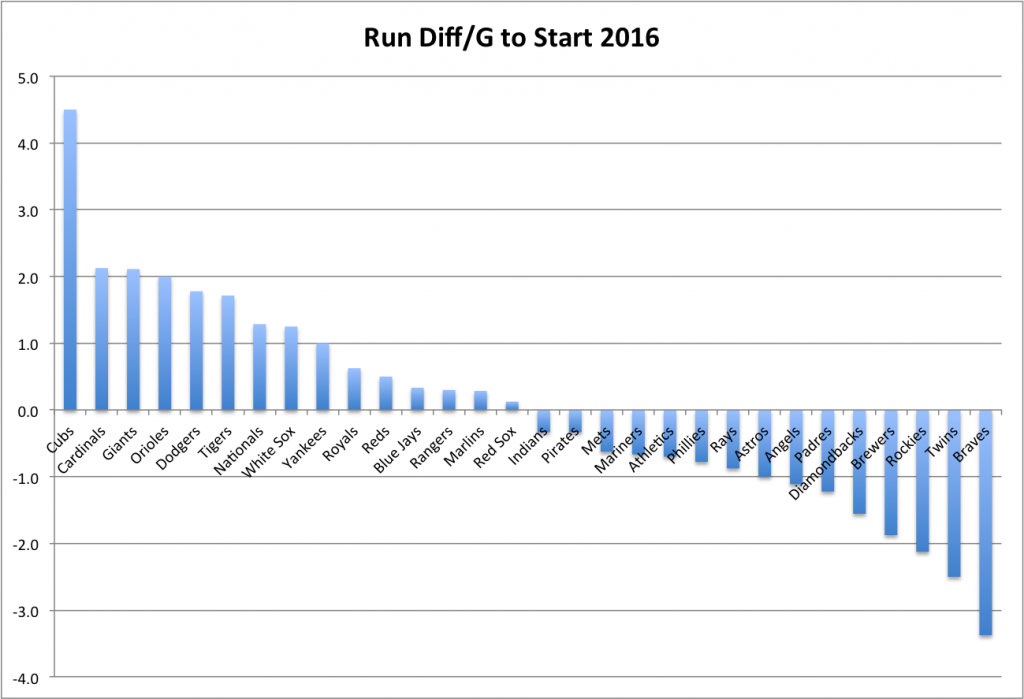 In fact, it’s really good, more than double the next best team (some team named the… Cardinals?). But, as has been reinforced many, many times over the last decade, early season results often don’t matter, or at least matter much less than we think. As fans, we’re inclined to give lots of weight to what happens in the first few weeks of the season, because there’s nothing else to look to, but in terms of actual predictive value or impact on season outcomes, these weeks are identical to any random stretch in the middle of the season.

That said, small sample concerns are often used to cudgel anyone expressing any optimism before May, and that’s no fun. Let’s actually put the Cubs very good, very hot start into context, by identifying other similar stretches (whether they started the season or not), and seeing how the teams of those stretches performed in the rest of the season.

There are a few caveats. First, I set the run differential threshold at 36, right where the Cubs currently are, and this includes a number of streaks over which teams had a larger run differential. Logically, those teams are probably better in general than the ones with smaller run differentials, so this is perhaps a little optimistic. I also lumped all streaks in together, including the 2013 Tigers from July 26 to August 4, when they scored 48 runs and allowed 10, and the 2011 Tigers from September 1 to September 9, when they scored 73 runs and allowed 35. They have the same run differential, but vastly different ways of getting there, and there’s an argument to be made that one is more like the 2016 Cubs than the other. If you limit the sample only to stretches in which the team allowed 20 or fewer runs, there are 20 other streaks over 12 team-seasons, not including this year’s Cubs. On the whole, they performed slightly worse, with a mean win total about 1.5 below the whole sample.

Whatever way you cut it, though, the basic message is the same. The Cubs have had an awesome and impressive eight games, and teams that have had similar streaks tended to be good teams. These eight games mean no more nor any less than that. It’s better to have a 3.0-game lead on the Cardinals and a 2.5-game lead on the Pirates than to not (duh), but the Cubs aren’t going to hold a .875 winning percentage through October.

You know all this, though. I trust that you, dear reader, have taken these first weeks in stride, have added it to everything else you believe about this season and adjusted your expectations accordingly. Unless you were getting your “2016 NL CENTRAL CHAMPION CUBS” banners printed out already, you probably weren’t overreacting, and you probably weren’t underreacting, either, since watching a team club their opponents like the Cubs have in the last two weeks is pretty exhilarating. It’s not wrong to be excited by this, if you keep that excitement in context.

2 comments on “What Can We Make of the Cubs’ (Very) Good Start?”

I don’t see any reason we couldn’t go 142-20 this year (not including a clean sweep in the playoffs, of course).

This is an example of how cub fans jinx the team. Now they will end up only winning 141 Games