It’s not news to say that this Cubs’ lineup is extremely disciplined. In fact, some even believe that this could be the most disciplined lineup ever. Even if you don’t agree with that bold of a statement, it’s hard to deny the facts. Though the season is still in its infancy, the new-look Cubs are seeing an average of 3.97 pitches per plate appearance, lead all of baseball (not just the NL) with a 13.3 percent walk rate, and have the third best team OBP at .356.

Exemplifying this theme incredibly well at the top of the order each day is lead-off man Dexter Fowler. Fowler continuously reminds folks each game that his unexpected, late off-season return in 2016 shouldn’t be taken for granted.

Heading into the start of Spring Training, the Cubs were fully prepared to enter the 2016 season without Fowler at the top of their lineup.  The door had closed, new plans had been put in place for their young roster, and Fowler would be suiting up each day at Camden Yards in Baltimore.

But after a adding a landslide of talent to their already-talented roster, the Cubs found out there was one more present under the Christmas tree: Fowler. Late in February, Fowler showed up at camp in dramatic and entertaining fashion to announce he would be reuniting with the gang, and all the pieces were suddenly back in place.

‘‘These guys are my boys,’’ Fowler said in Anaheim during the Cubs series with the Angels. ‘‘This is my family.’’

“Imagine the lineup without him [Monday].’’ Coach Joe Maddon told the media after the season opener. ‘‘He’s the catalyst, there’s no question about that.’’

The 2016 Cubs, who are now 9-3, and currently off to their best start since 1969, are making it it’s hard to disagree with Maddon about Fowler’s role with the club. Fowler is off to a dominant start, and leading the team in batting average, on-base percentage, slugging percentage, walk rate, and BABIP—breathing life and meaning into the phrase that Maddon utters to him before each at-bat “You go, we go.”

The importance of a lead-off man in a lineup may not be held to the same standard for other teams as it is for Maddon’s Cubs, but Maddon, who has infused a powerful sense of mindfulness and positive mentality into the Cubs since he took over in 2015, is demonstrating that mind over matter can truly be the substance of success if you let it be. Creating truth behind the simple four word phrase he hears every night, Fowler is setting the tone for this team at the top of the order from the get-go. You go, we go.

Considered in the context of the National League, Fowler is exuding the same dominance he is within this Cubs team. Fowler leads the NL in walk rate, is second in BABIP, third in OBP, and has a TAv of .407. Though much of this success may seem inflated due to the small sample size, there is a solid basis that this early dominance rests upon, indicating that though his numbers will normalize as the season continues, there is calculated precision in his approach.

So what exactly is it that Fowler has been doing that has created this spectacular start?

Well, (sample size caveat alert!), due to the small sample size we’re seeing, and the fact that we know the inflated statistics Fowler is currently putting up are not sustainable, it’s hard to draw a definitive conclusion as to what exactly is helping him out. But that doesn’t mean we can’t play a little detective and look back at what was working for Fowler in the second half of last season, as well as look at some things that could be strong indicators of success going forward.

Right now, Fowler is really playing with the lower half of the zone, and he’s really making quality contact on sinkers. That home run Fowler hit on Saturday off David Hale? A sinker that he absolutely crushed in the lower, middle half of the zone. The solo blast Fowler hit in St. Louis on Monday to give the Cubs the lead? 91 mph sinker that was just a little higher in the zone than the pitch he took Hale deep on.

In 2015, Fowler was destroying changeups, sinkers and fastballs with reckless abandon, hitting them for line drives at the highest clip of all pitches he saw in the second half. See for yourself here in Fowler’s pitch outcome data for the second half of 2015:

In the data below for 2016, you can see Fowler is doing similar damage on the sinker again:

This indicates that his ability to work the lower half of the strike zone could be transferring over into 2016, and that pitchers can’t hide from him by keeping the ball low (he’s also hitting low fastballs quite well, another skill that we may be seeing transfer over from the second half of 2015).

Now take a look at the difference in groundball rate on the sinker as well, he’s making outs on the pitch as much as he did in the second half, and so far, he’s making quality contact on it (check out the line drive percentage!). He hasn’t done much with the changeup yet, which he will need to work on once pitchers begin recognizing how well he’s obliterating sinkers in the zone, but again—it’s still quite early. For now, it appears that a little of the early Fowler magic we’re seeing can be attributed to how well he’s doing against the sinker.

Luis Medina over at Bleacher Nation noted that one of the pivotal changes Fowler has made since the second half of 2015 is that Fowler is pulling the ball with more authority. Medina breaks down the change Fowler made in his first and second half pull percentages:

“Fowler pulled the ball 41.6 percent of the time in the first half of 2015, which was in line with his 40.6 percent pull rate in the first half of his career. There was a clear change in approach and results in the second half as Fowler posted a 47.2 percent pull rate in the second half—which was an increase of 7.9 percentage points.”

And that trend is continuing in 2016. Fowler finished 2015 with an over pull rate of 44.1 percent. In 2016, he’s now pulling the ball at a 51.7 percent clip, which again, is likely to normalize as the season progresses, but is still a strong start and with the caveat being that we saw a bit of this in the second half of 2015, means that it’s most likely not just a small sample size fluke for the lead-off man.

If Fowler indeed becomes able to use the entire field with more consistency from both sides of the plate, he will be an even larger on-base asset and threat in 2016.

He’s significantly cut back on his swings

Remember that patient plate approach the Cubs have adopted that I spoke of earlier? Fowler is no exception to that. Fowler, who is seeing 4.08 pitches per plate appearance in 2016 ( the same exact number he saw in 2015), has significantly changed his approach at the plate.

Though Fowler’s outside the zone swing rate hasn’t much changed from the 20 percent clip we were seeing in 2015 (he’s currently swinging outside the zone at 19.7 percent), his contact rate on these pitches has increased drastically. Fowler is now making contact on pitches outside the zone 65.4 percent of the time, a 7.1 percentage point increase from his 2015 rate. Looking at this data, it becomes clear that Fowler is choosing his pitches to swing at wisely.

Take a look Fowler’s swings per pitch zone map for 2016. He’s keeping his swings inside the zone, and the data shows most of the pitches he’s swinging at outside of zone come when he’s in two ball, and three ball counts. 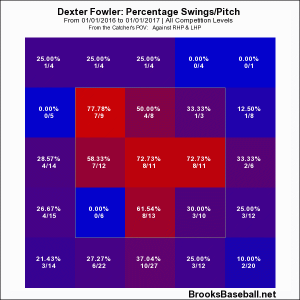 This is keeping quite in line with his approach from the second half of 2015, which looked like this: 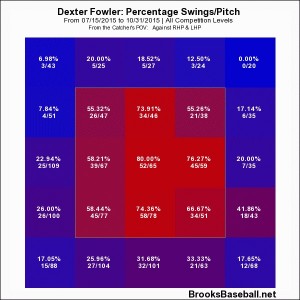 Fowler’s swing percentage and contact rate have significantly decreased as well, down 6.6 percent and 5.1 percent respectively. However, should Fowler continue to make quality contact when he does swing the bat and take walks as he has been, this won’t necessarily be a problem. We can take an educated guess here in saying that Fowler’s swing and contact rates will rise a bit as the season progresses, after all, the goal of the game is to get on base but it’s also to swing the bat.

Surely, it won’t be long until Fowler no longer leads the team in almost every calculable stat (including the 1.1 WARP, which we somehow haven’t gotten to until now), but right now it’s certainly fun to dissect this strong start for Fowler and the Cubs. The mantra is “You go, we go”—and the Cubs have certainly been following Fowler’s tremendous lead.

Tags: Aphorisms, Dexter Fowler, Success |
Cat Garcia
Follow @TheBaseballGirl
Cat Garcia is a freelance baseball writer from Chicago. When she is not writing or reading about baseball, she can be found at her place of employment, located at 1060 W. Addison Street.
read more from Cat Garcia

3 comments on “You Go, We Go: How Dexter Fowler Is Helping Set the Tone For The Cubs’ Brilliant Start”

Rizzo and Heyward really need to pick things up offensively. Despite Rizzo’s ok OPS he’s not hitting well and not looking good at the plate in general. Heyward just cannot hit inside fastballs with his long arms. He needs to figure out a way to shorten up and get the barrel on the ball. He’s struggling against lefties and righties.

So, Yay Dexter. Time for others to join the fun.

The sick thing is, if you’ve been watching the games, even when Fowler makes outs he’s absolutely killing the ball (as you pointed out). How many of his outs have been balls hit to the warning track? Just astounding how great he’s looked at the plate this year.

I believe the FO plan was to keep this guy this year and move on from him for the future. Even assuming he drops back down from the numbers he put up in 2015, I still can’t imagine our offense being nearly as good without him. Moving Heyward to CF seems like a bad idea to me, and as much as I love Almora, I don’t see him being a high OBP guy (though his glove is sick, and he seems to hit nothing but line drives from what I’ve seen).

Anyway you look at it, Fowler has got to be making a case to stick with this team for the future, but I’m afraid the price will be too great for his age. It’ll be interesting to see how it all plays out for the remainder of the season and what happens once it’s over as far he’s concerned.

Loved this article! The Wrigleyville team is on a roll this week! Keep up the good work!

Oh how much better the Orioles offense would be, with him at the top and Alvarez a Free Agent. And the defense would be better, too, with Fowler out there and Trumbo DHing. Alas.