Let’s start this by saying the important thing: this doesn’t matter. I know that’s not the best way to Draw The Reader Into The Story, but it is the truth. Whatever struggles Anthony Rizzo is going through—he’s hitting .040/.167/.040 since May 15th—he’ll eventually come out of. He’s too much of a professional hitter, and been through too much of this sort of nonsense before, to not do so. As he emerges, so will the team, and the medium- and long-term prospects for both are still deeply positive.

But that’s a hell of an ugly slash line. So let’s talk about what’s happening. Here’s the first thing I want to show you: Rizzo’s whiff rates on all pitches, from the beginning of the season to May 1st. 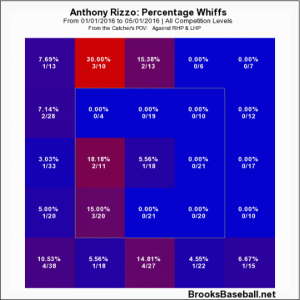 Here’s the profile, then: Rizzo doesn’t miss on the inside part of the plate, except very rarely when he’s jammed low and in, and extends across the plate well enough to swing at, but not always hit, pitches on the outer third and outside the zone on the opposite side of the plate. He’s a little vulnerable up, but only way up. In general, that’s a strong profile, and it created the Rizzo of April that we know and love. So, did it change? 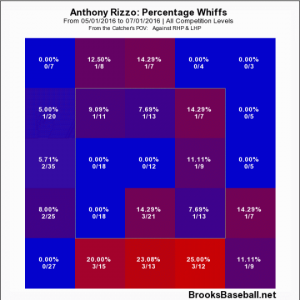 Yeah. Suddenly, Rizzo was missing on a few more pitches inside than he ever did before. Because the sample sizes are pretty small, let’s not give those too much thought. Let’s focus instead on the pitches down at the bottom half of the zone, which Rizzo previously rarely missed. In May, he was missing them. Not a lot, not at an extraordinary rate, but at a higher rate than he had before. When we’re looking for something—anything—to explain poor performance, maybe that’s something. But hey, maybe it’s not. So let’s look at another set of charts, these ones related to the types of pitches Rizzo is seeing.

That’s Rizzo’s whiff rate on three categories of pitches: hard, breaking, and off-speed. And the key thing to notice here is that while his whiff rates have basically held steady, if not declined, for hard and off-speed pitches, his whiff rate on breaking pitches has essentially tripled from April to May. These kinds of things move around, but Rizzo never—not once—saw that kind of jump in whiff rates on any category of pitch in 2015. Here’s that year’s data: 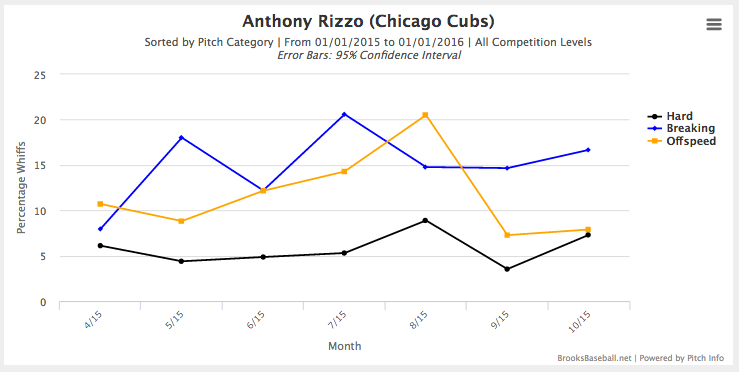 The closest we see to this kind of dramatic drop is a precipitous decline in his whiff rate on off-speed pitches between August and September of last year, but otherwise things stayed within, generally, a pretty narrow band, and whiff rates certainly didn’t triple in a moment. So what the heck is going on? Well, I don’t know. That’s always the answer. I’m not a scout, and Rizzo has many smart baseball people working with him right now to help figure it out, so let’s keep our expectations calibrated correctly. Still, look at this chart and tell me what you think: 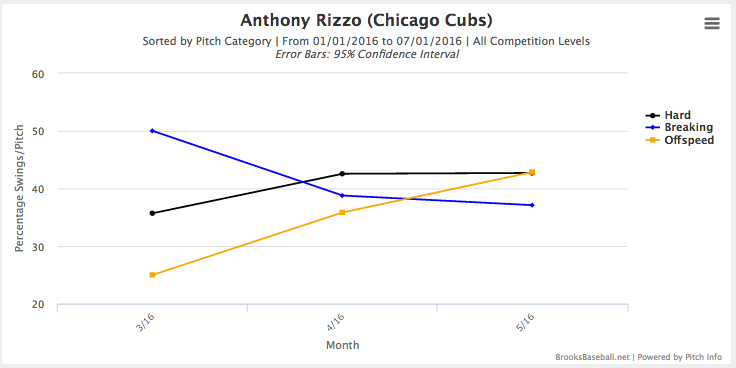 Those are Rizzo’s swing rates on all three categories of pitches and—this is the important part, I think—Rizzo’s swing rates have held pretty constant through this mense terribilis. That suggests that this isn’t a problem about timing—Rizzo’s stayed just about constant in his ability to pull the trigger on the pitches he wants to hit. He’s just … missing them.

About that, I’m not really sure what to say. This is the sort of thing that kind of seems like a fluke of weird hiccups that collaborate to create something that looks a lot worse than it actually is. Rizzo’s walk rate is fairly stable through this stretch (remember that nice BA/OBP split from the terrible triple-slash I showed you at the outset?). He’s not striking out too much more than he was before. He’s not hitting line drives at a noticeably different rate, or hitting the ball into the ground. Maybe, maybe you could make the case that he’s pulling the ball more than usual (he is) and so hitting into the shift more often than has been his wont, but that, too, is hard to attribute all of the poor performance to.

So let’s return to where we were at the beginning of this exercise, which was saying this: Rizzo is a very good, very professional, very patient hitter. He’s going through a rough patch right now, but nothing—with some slight exceptions—has really changed at all about his approach at the plate. Sure, there are things that he’s tinkered with here and there, but the Rizzo of the last two weeks is basically the Rizzo of the last three years, with some weird, collective bad luck and unproductive performance happening to him. But if you trust the process—and Rizzo and these Cubs sure do—you shouldn’t be worried. Anthony’s still in there. He’ll be back out soon.

Tags: Anthony Rizzo, Slumping, Why |
Rian Watt
Follow @rianwatt
Rian is the editor-in-chief of BP Wrigleyville, an author at Baseball Prospectus, and a contributor at VICE Sports and FiveThirtyEight. He's based in Boston, and misses Chicago every day.
read more from Rian Watt

2 comments on “Anthony Rizzo Is Going Through a Thing”

Just grabbing a sample, what the problem is comes clear: He’s grounding out. He can’t elevate the ball. Now I see your charts, and it comes clear.

It seems that Rizzo can’t hit low breaking balls now. San Diego started throwing them and his production dropped — .222/.462/.222 that series — and scouting being what it is, everybody saw that and now Rizzo is being fed nothing but low breaking balls, and he’s putting them into play. Thus his BABIP, .143 last 15, .341 the 15 games before.

I don’t have exact pitch charts for these games, but the stats I do have, plus your work, strongly suggests that it is low breaking balls that are (ahem) breaking him. Of course, throwing breaking balls high tends to be its own punishment, so assuming they’re low is pretty safe.

It’s not the whiff, though — it’s putting a bunch of weak ground balls into play, which is pretty much the worst thing for your closer to be doing. A closer that strikes out only puts himself out, a closer hitting weak grounders is begging for a double play. (2 last 15, 1 previous 30 — but that’s a pretty tiny sample.)