When Javier Baez first came to the big leagues in 2014, it was a well-established fact that his cumbersome strikeout rates would be coming with him.

But that was nearly two years ago (time really does fly), and it’s time to stop and appreciate that though Baez is not a perfectly tailored and finished product with the plate approach of his shining counterpart Ben Zobrist, he’s come a long way in just two short years. Baez has been on a tear recently, and in the month of June, he’s batting .262/.279/.524.

Baez has reached a point in 2016 that some may not have been sure he would ever be able to, and the best part about it is that at age 23, he’ll likely only continue to improve.

Of course, being among of a lineup of hitters that have the best walk rate, the best OBP, and a middle of the pack strikeout rate in the National League would make nearly any average to middling player look inferior—much less someone with the track record of Baez.

Take a look at the degree to which Baez’s strikeout rate has improved over the last three seasons (keep in mind he only had 80 PA in 2015, so small sample size caveat still applies)

Baez has lowered his strikeout rate gradually since 2014 and cut it by nearly 50 percent overall. Right now, Baez is only striking out less than 2 percentage points above league average. The 2016 Cubs mostly have an above average strikeout rate themselves, so Baez’s 22 percent rate falls right in the middle of their lineup (min. 120 plate appearances). Pretty impressive, right?

The largest concern among these numbers Baez’s extremely low walk rate. League average walk rate hovers around 8-9 percent, but for the Cubs it’s much higher. Kris Bryant currently owns the Cubs’ lowest walk rate among regulars, and he’s walking at nearly a 10 percent clip. So, yes, that one aspect of Baez’s approach still needs a bit of work—but it isn’t quite enough to blemish the fact that his strikeout rate in 2016 is nearly league average. Those are words I thought I might never find myself able to type.

Contributing to his recently plummeted strikeout rate were a few tweaks to his monstrous swing. He’s improved on his ability to make quality contact on offspeed offerings, and he’s drastically cut down on how often he swings at high fastballs—something that aided Baez in considerably lowering his strikeout rate. Take a look at the difference in pitch outcomes from 2014 … 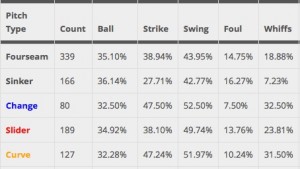 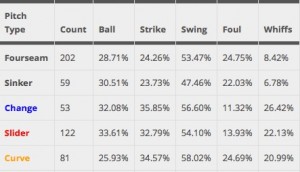 Fouling off pitches often isn’t the best solution for cutting back on strikes, however it shows improvement for Baez, seeing as he now has a better chance to stay alive and lengthen an at bat by fouling a few off rather than just taking a nasty hack to create an unnecessary strike the way he once was.

Pitchers are now seeing that it’s become increasingly difficult to get Baez to swing than it was before, though it’s not virtually impossible, as I said before—he’s no Ben Zobrist. Pitchers are now attempting to get Baez into expanding his zone by throwing him more pitches off the plate than ever before. Low, breaking pitches nearly in the dirt and high fastballs used to be the key when throwing to Baez. Now, it’s all about low and off the plate. Baez has slight decrease the percentage of pitches he’s seeing in the zone, (about 2 percentage points) and has since adjusted, raising his outside the zone swing rate by nearly 6 percentage points since 2014.

The next part is quite interesting though. Take a look at the progression of Baez’s outside the zone contact rate:

Those are some large hikes, but though they’ve been steadily increasing over the years, the number of pitches Baez is seeing outside the zone has increased while his walk rate has actually decreased, and he’s still cutting back on the strikeouts. So that can only mean there is logical evidence to believe that no—this is likely not a flukey baseball thing.

So the next question then would be, is that contact anything meaningful? Well, Baez’s ground ball and fly ball rates this season are mainly in line with his 2014 numbers (we won’t look at his 2015 rates, as they were somewhat low and a bit of an outlier seeing as his entire 2015 was comprises of just 80 plate appearances). So in short—no, there is no real meaningful fluctuation in his groundball and flyball rates. So, walk totals are low, he’s not making contact on the ground or in the air at a much higher rate than normal, and his strikeouts have decreased. So this must mean the contact that he’s making on these pitches off the plate is mostly quality contact, right?

Take a look at this batting average map on all pitches seen for Baez in 2016: 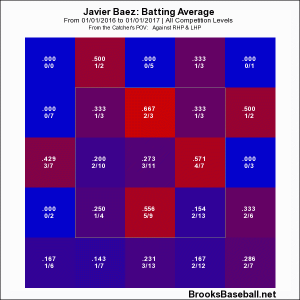 I’m seeing a lot of red off the plate, and unless you’re color blind, you probably are too. It seems that the answer is yes, Baez is not only striking out less these days, but he’s able to make good contact on pitches that are outside the strike zone instead of surrendering to pitchers attempts for him to simply continue to whiff on them in new and inventive ways, or simple roll over on them. Inside pitches continue to be an issue for Baez, and he creates quite a few ground ball outs on them—but that’s likely a side effect of his bat speed and not being able to keep his hands in on the ball enough on these pitches.

So while Baez is still working on finding the fabled power stroke that he was pegged to bring with him up to the majors, he’s had a lot of kinks to work out along the way, and as some have noted, he’s been torn down and rebuilt from the ground up. Considering it’s been just two short years, I would have to say that cutting your strike out rate in half, tweaking your swing from a hack to something that can effectively make contact on almost all pitches, and being able to expand your zone to increase your quality contact are all quite a good start. The walks will be the next point for Baez to work on, and as we’ve seen throughout June, the power is certainly there—we just must exercise a little extra patience waiting for it to fully blossom.

All that and we haven’t even talked about how plus Baez’s glove is at multiple positions. Well, that’s for another time.

Tags: Improvements, Javier Baez |
Cat Garcia
Follow @TheBaseballGirl
Cat Garcia is a freelance baseball writer from Chicago. When she is not writing or reading about baseball, she can be found at her place of employment, located at 1060 W. Addison Street.
read more from Cat Garcia

Your Zobrist references are understood–few have as good a command of the zone, esp not Baez–but spend a lil more time realizing Zo was not always Zo and you may be surprised.

Despite Baez’ gruesome start in ’14, his slash line for his 1st 3 yrs is better than that of Zo over hist 1st 3–despite Baez hitting the show at an age 5 yrs younger than Zo. Baez is far, far more advanced than Zo was at the same age, and has a far greater ceiling (how many middle IF can you name who hit 37 HR in 1 minor league season?).

I absolutely love Zobrist, have for yrs, but Baez has more power, speed, and range already; his discipline, growth and progress, so well documented by you here, have probly surprised us all. Good odds that he eclipses Zobrist’s formidable all-around game–as soon as next yr.

Of further note: Zo’s numbers came when it was much easier to hit in the league (2007, fewer shifts, higher strikes, more PEDs); still, his .391 OPS– AND EVEN K:BB RATE–were worse than anything Javy’s ever done.