When Jason Hammel went out to the mound for his first start of the second half of the season last Saturday, a lot of fans watched with anxiety over what the results might look like. The long-held and frequently cited theory is that, as soon as the schedule officially moves across the midpoint, Hammel turns into a pumpkin—or some sort of gourd anyway.

But the results against the Texas Rangers and Yu Darvish were tantalizingly good, and possibly good enough to put off talk of ‘Second Half Hammel’ until after his next bad start, at the very least. Before we dive into whether we should expect a furious meltdown to ensue in the next few weeks from the Cubs’ tall right-hander, let’s see why the narrative exists.

In 449 1/3 innings pitched since the beginning of the 2014 season, Hammel has a 3.55 ERA and 3.92 FIP to go along with a solid 3.62 K/BB ratio. Considering the roughly $17.5 million that the Cubs have paid since the start of the 2014 season for the guy who has been their number four starter, you couldn’t ask for much better. But how those numbers are split across the entirety of the baseball season is where the Hammel-angst originates.

Clearly, he’s been much better in the first half—especially during the last two seasons—than he’s been in the second half of the season. But why is that? How does that happen? Is this just a fluke? What we do know, or can infer based on things we’ve heard publicly, is that Hammel has worn down a bit in the latter portion of the season, due to either nagging injuries or fatigue. With that in mind, he came into the 2016 season having dropped a bunch of weight and in better condition than years past.

So that’s something Hammel has going for him this year. But another thing that’s notable about his past struggles is the change in his slider. The most noticeable thing is the vertical movement, which has been extremely inconsistent in from the early portion of each of the last two seasons, but not so much in the final months. 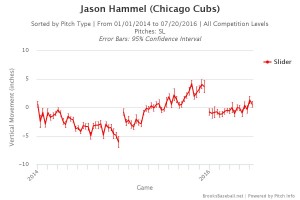 It’s not so important to note exactly how his slider is moving so much that he clearly hasn’t been consistent throughout the year in how he’s throwing it. In 2016, it’s been ‘so far, so good’ on that front, as he’s been relatively constant in the kind of movement he’s getting on his out pitch.

That all matters quite a bit, because batters are judging his slider when it’s missing the zone and he’s getting into more hitter’s counts. When that happens, he’s getting crushed.

The difference in slugging percentage is eye-opening. Without the ability to control where his slider is going, batters are sitting on Hammel’s fastball.

Outside of the recent start against the New York Mets, the box score results for Hammel have been just fine lately. In his last two starts against the Atlanta Braves and the Rangers, he’s thrown a total of 11 innings, walked just two, struck out 13, and allowed only three earned runs.

But, unfortunately, some of the external signs of ‘second half Hammel’ have been present since the start of July. Batters are slugging .500 off his fastball—and 1.036 off of his sinker—and he’s only getting 33.3 percent of his sliders over the plate with a whopping 30 percent falling off the plate, low-and-away. Other than his bad game against New York, he’s been able to get away with it. But will that continue? It’s hard to say definitively, but his history says no.

Maybe Hammel’s chronic second half problems are related to muscle cramps, to which his doctor prescribed lots and lots of salty potato chips—we should all be so lucky to have that kind of problem, right? Maybe it’s that he was hurt or wasn’t in the best condition in the past. There’s no doubt he’s in better shape this year, and as far as we know, he’s healthy. Are there any reasons to have hope that a second-half-disaster can be avoided?

Last season, the pitching depth beyond the top-four starting pitchers was atrocious, with guys like Dallas Beeler and Tsuyoshi Wada attempting to fill the fifth starter role before the Cubs were able to acquire Dan Haren. Hammel was essentially required to take the ball every fifth day, and even after hurting his hamstring in June in a start against the St. Louis Cardinals, he continued to do so. But his season spun out of control from there.

To compare, shortly after the Cubs traded Hammel to the Oakland A’s back in 2014, he started getting pounded—a 6.75 ERA in his first seven starts with Oakland. The A’s sat him down and gave him nine consecutive days off in August, essentially skipping his turn in the rotation. The payoff? In Hammel’s final six games for the A’s that season he tossed 35 2/3 innings with a 2.02 ERA, 33 strikeouts, and just four walks.

If the Cubs start seeing some of the key indications that Hammel is having problems locating his slider and that hitters are sitting on his fastball, simply allowing him to continue going to the mound every fifth day like they did last year would be a tremendous mistake. The pitching depth is better this season, and with a decent lead in the division it’s not going to kill the team to give Adam Warren or Brian Matusz one or two starts in August.

It might be in everybody’s best interest to keep an eye on the big picture and skip a start, or even move Hammel to the disabled list for a few weeks, with the hope that it’ll make a difference in how he’s performing heading into the postseason.

1 comment on “Do The Cubs Have A Solution to ‘Second Half Hammel’ Problem?”