The last time Kyle Hendricks faced the Brewers, he lost in a 5 1/3-inning, four-run effort. That was the last time he surrendered more than three runs in a start—and it was on May 17, nearly four months ago. Since, Hendricks has ridden his changeup and savvy to the best ERA in the majors, 2.09. That’s nearly a half run better than his competitors for the ERA title, a litany of All-Stars by the names of Bumgarner, Syndergaard, Lester, and Arrieta. It’s hard to write about Hendricks this season without being effusive: he has a couple of 12-strikeout games in that stretch, his strikeout total is exactly 100 more than his walk total, his WHIP is second in the majors, he’s ninth in home runs per nine innings.

Zach Davies spells his first name wrong. Here’s Travis Sarandos (@travis_mke, of Beyond the Box Score and Disciples of Uecker) to tell you about the wrong-spelling-name-man.

The Cubs were not very nice to Davies the last time they met, hammering him for ten hits and seven runs over four innings in a 6-9 loss for Milwaukee. It was the low point of a disappointing month for Davies after three months of dominance. Nothing about Davies intimidates you: his fastball tops out in the very low-90s, he doesn’t have show-stopping movement on any of his breaking pitches, and he is often mistaken for the children that run onto the field with the players and collect autographs before Sunday home games. All of his stuff plays up, however, because he locates his pitches well and the fastball is complemented by a plus changeup.

Hammel has struck out fewer batters this season than he has since a fairly disastrous 2013 in Baltimore. After an impressively consistent July and first half of August, proving that the rumors of Second-Half Hammel were greatly exaggerated, he sputtered in two consecutive starts. The first, a 10-run, 10-hit spanking at Coors Field, was a “wear it” type of game, and Hammel had little chance to rebound in his next start, in which Joe Maddon yanked the righty after 2 1/3 innings. Luckily, his last start versus Pittsburgh was solid: a run and six strikeouts in six innings, his 14th victory on the season. He hasn’t seen some of the wobbly velocity dips and spikes that he’s seen in the last two seasons, especially with his slider (his most important pitch). 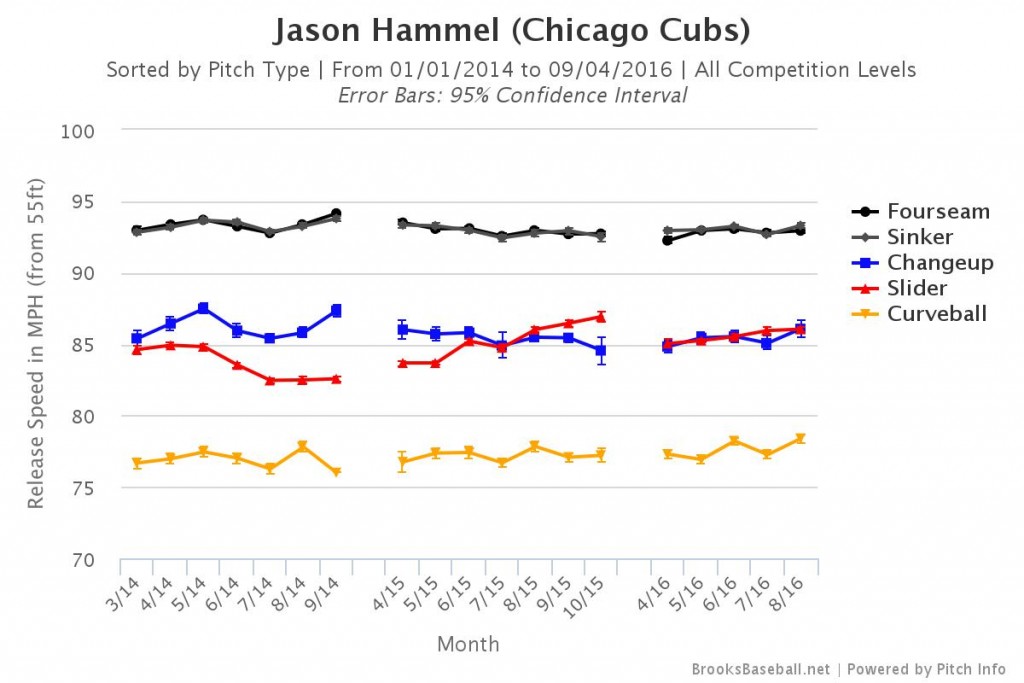 Since returning from his two-month exile to Triple-A, Peralta has actually been pretty decent, averaging six innings per start (he finished the sixth inning just twice in his first 13 starts),while posting a 3.00 ERA and bumping up in his strikeout rate. His last outing may have been his best since his breakout 2014 season. He shut down the Cardinals over seven three-hit innings, allowing one run and striking out ten. His improvement has come on the back of his slider, which he’s using now more than ever and more effectively than ever: the pitch is generating a ridiculous 50 percent whiffs per swing.

Wednesday’s Cubs starter hasn’t been announced, but Jon Lester is in line to toe the rubber for the North Siders. Lester’s Friday complete game was indicative of the lefty’s pristine 2016, a fine sophomore effort that will likely garner him some down-ballot Cy Young consideration. Although his DRA sits a full run higher than it did in 2015, 3.78 to 2.85, that’s partially a function of a few more home runs allowed. His ERA, TAv allowed, and WHIP are in top-of-the-NL territory, while his walk and strikeout rates are not as good as last year’s.

Garza also posted his best outing in at least a year in his most recent outing against the Cardinals, with a nearly identical line to Peralta’s: seven three-hit innings, one run and eight strikeouts. In his last two starts, Garza has allowed just one run over 12 1/3 innings while striking out 17, which matches the total from his previous six starts combined. Garza is still working toward matching the 30 wins that Chicago cost him during his time on the North Side—he’s got 23 victories under his belt since leaving the Cubs in 2013.

The Cubs’ magic number is 12 games, inching toward a division clincher. The Brewers are playing out the string and seeing who might be a 2017 Brewer. The 22-year-old Orlando Arcia and 26-year-old Keon Broxton are two of the most exciting players plying their craft in West Allis, the former a blue chip prospect shortstop, the latter an emergent centerfielder. Arcia hasn’t starred offensively for the Crew, with a meager .204/.274/.340 line in 113 plate appearances, but his walk rate and defense portend a great future. Broxton has struck out at an alarming 36.7 percent rate this season, but his .275/.399/.481 since the start of June, replete with an absurd 17 percent walk rate, ensconce him in the tier of “good” NL centerfielders.

On the Chicago side, you can’t go wrong watching prospective NL MVP Kris Bryant. He’s improved in nearly every facet of the game in his sophomore season, and he’s vying with some guy named Trout for the title of MLB’s best in 2016. Hendricks twirls for the Cubs on Tuesday, and he’s been nearly as impressive on the mound as Bryant has been at the dish.

For some more under-the-radar things to watch: Joe Maddon will mix and match his position players with an eye to the playoffs, especially in the outfield and with Tommy La Stella. Jorge Soler is recovering from an in-grown toenail, and he walked in a pinch-hit appearance Sunday, but a start might still be a few days away with the Cubs’ lack of urgency. An extra-inning game Sunday, along with some tight games over the weekend, have once again taxed the bullpen, but expanded rosters have quelled some of the concern that had developed in recent weeks with Hector Rondon and Pedro Strop out.

Monday’s game, the series’ only matinee, is a 12:10 CDT affair on the old Number Nine (WGN) locally and ESPN nationally. Tuesday is the first of two 7:10 CDT starts, on Comcast SportsNet Plus, while Wednesday is on CSN’s main channel. All radio broadcasts are on WSCR 670 AM.