At the beginning of the season, it seemed the Pittsburgh Pirates would be one of the three thoroughbreds competing with the Cubs and Cardinals in the NL Central horse race. It only made sense: this team posted 98 wins in 2015, and they still had studs like MVP Andrew McCutchen, Starling Marte, and Gerrit Cole. Plus, second baseman Jung Ho Kang would be back after Chris Coghlan Lawrence Taylor’d him off the team for the year.

Well, needless to say, the Pirates were less of a stallion and more of an old gray mare.

McCutcheon posted meh numbers for most of the season, Cole was unspectacular, and the team’s magic dust just disappeared. The team dealt closer Mark Melancon to Washington in what seemed to be a clear white flag trade. Incredibly, they stayed somewhat competitive and McCutchen rediscovered his super powers, leading some to ponder whether they should have kept Melancon and just gone for it.

So instead, the Pirates began the night 4.5 games out of the Wild Card, pretty much playing out the string, trying to keep some butts in the seats, and letting John Jaso try to win the Drexl-from-True-Romance lookalike contest. 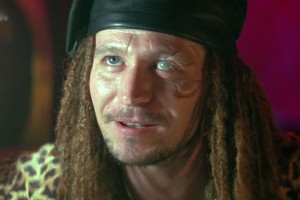 Gary Oldman as Drexl from True Romance, or John Jaso?

Which brings us to tonight’s game. With the Cubs’ ridiculous lead in the standings and home field advantage sewn up through the World Series, the only remaining questions are: Could Kyle Hendricks further lower his ERA? (Spoiler alert: yes!) Would Kris Bryant cross the 100-RBI threshold? (Spoiler alert #2: yes!) Would Jason Heyw… never mind.

Anyway, onto the game!

Top play (WPA) : In the top of the fourth, Heyward led off with a monster liner off the left-field wall that had a 197-mile-per hour exit velocity. (Just kidding—it was as dribbler through the middle.) A wild pitch got him to second, then Russell was hit by a pitch that just grazed him. Albert Almora Jr. reached with a beautiful bunt past the pitcher that caught everyone by surprise, so the bases were loaded for Javier Baez. (You probably see where this is going.)

Onan 0-2 count, Javier Baez tomahawked a flat, down-the-middle-of-the-plate fastball into the left-field bleachers for his second grand slam of the season (+.140). It was remarkably similar to a ball he’d hit in the second inning, except this one stayed fair. And the bases were loaded. Otherwise: identical. By the way, is there anything more satisfying than seeing the pitcher hang his head the second the ball gets hit, knowing he is about to feel the sting of humiliation at the hands of the Cubs—especially since that same jerk-ass pitcher nearly took off Anthony Rizzo’s head with a high, tight fastball earlier in the game?

Bottom play: Numerically, the bottom play was actually a John Jaso double to right in the third that put runners at second and third (-0.86). (They were both stranded, by the way.) In reality, it was consecutive homers Hector Rondon gave up in the eighth to Matt Joyce and David Freese. The grooved sliders allowed the Pirates to pull within ten runs—not exactly a nail-biter. But given that he Rondon gave up three runs (two doubles, a single, and a walk vs. only one out) against the Cardinals on Saturday, it’s a slightly disturbing trend. Yes, it’s small sample size; yes, the Cubs have Aroldis Chapman—the ultimate trump card (Editor’s n. But it’s still a little unsettling.

Key moment: I know RBIs, like age, ain’t nothin’ but a number, but I felt Kris Bryant has been pressing for a while as he stalled near the watershed 100 RBI mark. (After all, he had only two homers in his past 20 games.) Plus, he ended last season at 99 RBIs, only knocking in one run over the last 10 games of the year. So while his sixth inning laser rocket two-run jack was just another feather in his cap, it was nice to see Bryant get to 101 RBIs. And, I’m guessing, it won’t hurt his MVP chances, either.

Trend to watch: Almora might not be a sexy choice to make the playoff roster—although there’s nothing wrong with being sexy—but he had some solid at bats tonight. He had that seeing-eye bunt in the fourth, a solid single in the fifth, and a RBI double in the sixth. That’s in addition to his all-world defense, although that didn’t come into play tonight.

Tommy LaStella has been scuffling in a serious way since his… whatever, posting a .290 OBP and .286 slugging percentage after his return on August 31 (before his walk and double tonight). And while I know he’s a lefty and Almora isn’t, think how much better you’d feel about your outfield defense if you could take Soler out in the seventh and put Almora out there. Our own Ryan Davis speculated about this very possibility before the season, and lord knows, you don’t want to cross him.

Coming next: John Lackey (3.39 ERA, 3.89 DRA) has been solid since his brief stint on the DL, making Cubs fans feel mighty confident about him being the fourth starter in the playoffs. Ryan Vogelsong (4.85 ERA, 5.11 DRA) is a pitcher who throws the baseball. Also, “Vogelsong” is a German term for killing birds with poisoned food pellets.

So there you have it.

Tags: Game Recap, PIttsburgh Pirates |
Joel Reese
Follow @@joelcreese
Joel Reese is a Chicago-based scribe who's written a bunch of stuff. His favorite player back in the day was Steve Swisher. He doesn't know why.
read more from Joel Reese

Well done, reference to True Romance and a link to a classic Tap scene (even if a little forced) in one Cubs article? This is why I read BP Wrigley!