On Friday, Jake Arrieta delivered a seven-inning, no-run, ten-strikeout, one-walk, 99-pitch performance against the Cardinals. Over the last two years, we have become accustomed to this type of performance from Arrieta, and so, with the playoff implications of the game more theoretical than anything else, we glossed over it a bit and focused more on Kolten Wong’s L-shaped stumble in left field, a moment that was used, quite understandably, as a symbol of the new order in the NL Central. But something else was underscored during Friday’s game as well, something very closely related to the Arrieta’s sparkling performance: the re-emergence of Miguel Montero.

This is because over the past several months, this type of performance has not been the norm for Arrieta. While still excellent this year, he has slipped, quietly, and in our minds, to third on the pitching depth chart, behind Kyle Hendricks and Jon Lester. Until Friday, he had only pitched seven innings twice since the beginning of August, his strikeouts down, and his walk rate up. This is largely attributable to normal regression; his run of dominance from July of last year to May of this year was bound to come to an end. But it is also likely attributable in part to the Cubs’ catching situation.

A constant in Arrieta’s dominant run was Montero’s catching, right up until the catcher’s early season struggles at the plate and his lingering back injury. And so Joe Maddon experimented, with limited success, in finding Arrieta a new catcher. David Ross and Willson Contreras caught the overwhelming majority of Arrieta’s starts since June, and Maddon made syncing the Contreras/Arrieta pairing an explicit goal of his in mid-August.

This all happened while Montero, much like Arrieta, slowly (and then quickly, once Contreras emerged) slipped to third on the depth chart. Fans might be surprised to learn that Montero has only spent 15 days on the disabled list this year, and that he has been on the active roster every day since May 14. For much of the season, as his batting average hung around the Mendoza line, he was treated as the last guy on the bench, someone only worth giving an at-bat to in extenuating circumstances.

But Montero has undergone something of a resurgence over the past several weeks, and the Cubs have taken notice. This resurgence was punctuated by his walk-off homer against the Brewers on the day of the NL Central celebration at Wrigley:

With his unspectacular-but-OK-for-a-catcher slash line (Unspektakuläraberokfüreinenfängerstrichlinie, in German) now sitting at .216/.327/.351 on the year (a .255 TAv), there is no longer any talk of Montero missing the playoff roster. The perception of his role has changed—a little bit. But on Friday, after the second game of his Arrieta reunion, I went over to BP to check out his season stats and was blown away by what I found.

Here are the Cubs catching statistics from this year:

Now, none of these are particularly obscure stats, and maybe I just haven’t been paying close enough attention, but I was shocked at just how good  Montero has been this year in aggregate. The public perception of his season has been so outwardly disappointed that you would expect him to have dramatically dropped off in value from his form last year. True, 2.0 WARP in 271 plate appearances isn’t quite the same pace as the 3.9 WARP in 403 that he produced last year, but it’s still damn good. The difference, perhaps, is that he couldn’t have had 403 plate appearances this year—the health just hasn’t been there—but he really has produced when he’s played. And he seems to be rounding into shape at the right time of year.

Most of Montero’s value comes from his defense, which is why Arrieta’s start on Friday stood out so much to me. He’s been worth 11.4 FRAA (Framing Runs Above Average) on 3580 pitches received, which is a pace that has only been bested by Buster Posey and Yasmani Grandal this year. Also—and this is much less quantifiable but just as important—he really seems to have a knack for working with Cubs pitchers, particularly Arrieta. Here is a Brooks Baseball chart of Arrieta’s pitch usage this year: 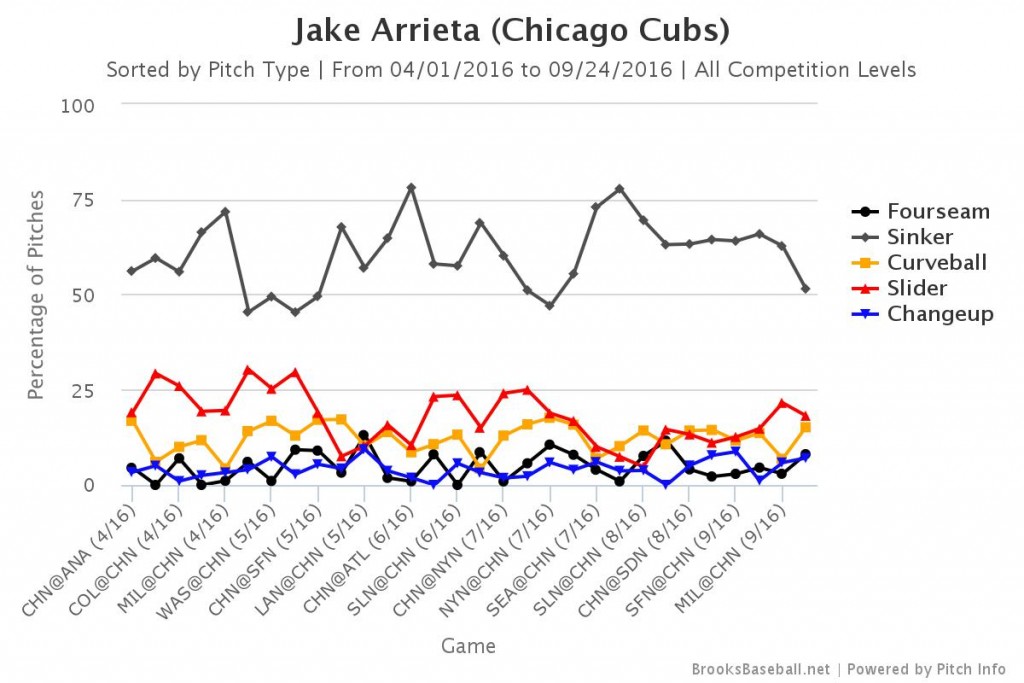 For such a simple chart, this looks like it might actually show something about the Arrieta/Montero duo. It seems like Montero starting correlates with Arrieta throwing fewer fastballs. The early season spike in fastball usage (from late April to early May) is exactly the time that Montero spent on the DL. And his most recent start, against the Cardinals on Friday, has the smallest percentage of fastballs of any game since Montero returned from the DL in May. Baseball is never this simple, but it seems like there really might be a difference in approach when Montero is catching. And the results that they’ve had together, generally, show us that this works.

The way that the Cubs’ catchers have complemented each other this year is really—and this is an analytical term—cool. Nobody would argue that any of them could have put up even five WARP individually in a full season’s worth of playing time, but separately they’ve produced 6.4 WARP at the position. This catcher by committee approach, though, cannot work as well in the postseason—there simply aren’t enough games for it to fully play out. And so, as we head into the postseason, despite the perception that he has struggled and that the reins have been mostly handed over to Contreras, I argue that Montero is still the Cubs’ best catcher for the postseason. His approach at the plate, his synergy with the pitchers and, yes, his experience make him the right choice against most right-handed pitchers and in any game started by Arrieta.

Montero is, by all accounts, a consummate teammate and professional, and during his midseason swoon, he was happy to provide support in the ways that he could. This is why the Cubs kept three catchers on their roster all year (!) and why they didn’t dump his contract for nothing when Contreras got off to a hot start. His 2016 stats, in aggregate, show that he is still in the midst of an excellent career. So this October, remember that the “We” in “We Are Good” still very much includes Miggy, no matter the perception.

Tags: Catchers, Miguel Montero, One Player |
Nate Greabe
Follow @ngreabe
Nate is a baseball lover from New Hampshire, where he grew up a Red Sox fan by geography and a Cubs fan by his Chicagoan father. He just finished his degree and now lives in Austin, which is weird.
read more from Nate Greabe

2 comments on “Despite Perception, Miguel Montero Is the Cubs’ Best Option At Catcher”

Great piece Nate.
I was wondering if you had any insight into why Fangraphs might rate Miggy so much lower in terms of WAR compared to BP? They have him at -0.1 for the season… Do you know if they don’t incorporate framing into their valuation? The other two catchers are much closer to the BP ratings with both Ross and Contreras coming in at 1.8 for the year… Thanks and keep up the great work.

Hey—Yes, I think the difference is largely because fWAR doesn’t include framing at all, and Montero hasn’t been great in other aspects of catcher defense. That’s (one of the reasons) why we at BP think WARP is better, although all usual caveats about defensive metrics apply. Thanks for reading!