I have to stop hanging out with Joel Reese. In case you’re not familiar with our little podcast, it’s called BP Wrigleycast and it features Ryan Davis, Isaac Bennett, Joel Reese, and myself.

Ryan makes solid arguments that run counter to many popular opinions. Isaac has strong views on developing players and is right more often than not. Joel is this guy:

So with the Cubs cruising to an NL Central title, the best offense in the NL, the best pitching in the NL, and the best defense in baseball, what could possibly be keeping me up at night? This isn’t like last year’s one-game playoff that had me stressed the whole day of the game, but still.

This team—while so good at so many things—stinks at holding opposing baserunners on. Granted, that’s a very fast Jonathan Villar stealing two bases off of Jon Lester, who’s notoriously easy to steal off of. But it’s just a microcosm of the really serious issue that Jon Lester has with holding baserunners on:

This is where Cub fans around the world say to themselves, “Hey, that’s no big deal. He’s been dealing with the hiccups for a long time and the Cubs have still won a ton of games, so I’m not worried! Besides, he’s got David Ross behind the plate and that guy still has a cannon and he keeps runners somewhat honest.”

And that’s true. Trust me, that was me saying those same words to myself last week. They’re comforting…until you realize that this isn’t just a Jon Lester problem—this is a Chicago Cubs problem.

At the end of last season, we wrote up a series of four articles detailing the front office’s plans to improve the team. I covered one of the things that seemed trivial at the time—a kind of “that would be nice to fix but no big deal if they don’t”—controlling the opponent’s running game.

And you might think it’s trivial too—but as the playoffs get closer and closer and we all get more and more nervous, it’s starting to get to me a little bit. Like I said, I’ve been hanging out with Joel a little too much.

By now you’ve probably seen all the charts and tables that show how amazing this 2016 Cubs team is. And they are—I can’t remember seeing a team this deep, this balanced, and this good all in the same season. So by now you’re used to seeing them at the top of every possible ranking. Whether it’s offense, defense, or pitching—they’re near the top in whatever stat you want to look at.

Except for the one we use to measure how good a team is at keeping the other team honest on the basepaths. At BP we use TRAA, which stands for Take Off Rate Above Average. From my last article on this:

It basically tells us how comfortable a baserunner is against the pitcher and how likely he is to “take off” on said pitcher. Positive numbers are bad and negative numbers are good.

What it tries to measure is how comfortable opposing players are once they reach base. Not necessarily how successful they are—just this squishy term we’re calling “comfort.” We know they’re very comfortable against Lester, but what about the team overall? Sure, Miguel Montero’s arm is nonexistant, but Willson Contreras has a cannon and he’s throwing runners out at a 37 percent  clip, so aren’t we better off than we were last year?

Nope. Check out where Cub pitchers rank on TRAA:

Or, to put it another way: 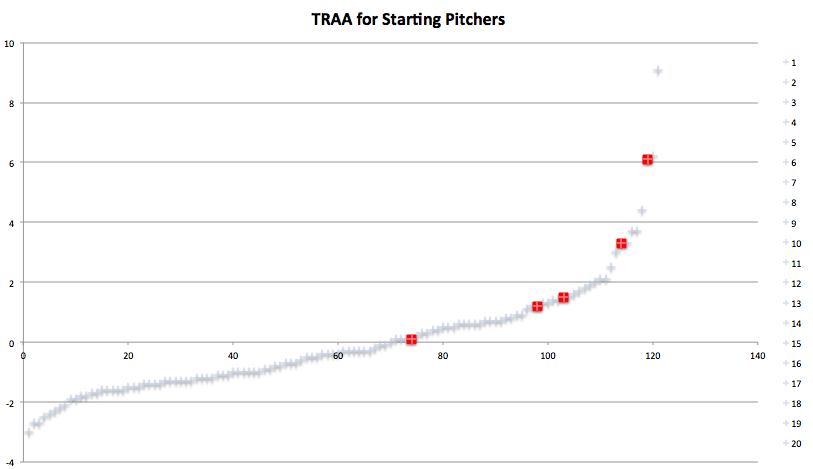 Cubs pitchers are in red

With the Cubs leading in every other possible statistic, you knew there had to be something they would suck at, right? That itself doesn’t surprise me. But does it concern me? A little bit, yeah.

The Cubs have allowed 127 steals so far, and that’s the 3rd-worst total in the game. Their catching situation is unique in that they’ll have three catchers trying to contain this running game in the playoffs. Ross has a good arm and knows what he’s doing (29% CS, good), Montero’s arm is fried but he’s a good framer and has been around the block (11 % CS, not good), and Contreras has all the makings of a solid-to-plus defensive catcher, but he’s young and inexperienced (37% CS, very good).

But there’s only so much you can do as a catcher to throw guys out if the guy on the mound won’t throw to first, won’t vary his times, or just doesn’t pay a whole lot of attention.

Right now the Cubs’ first-round opponent would be the Giants or the Mets—neither of which have a very threatening running game: the top base stealer for the Mets has nine (Jose Reyes) and for the Giants 14 (Angel Pagan). Once you get to the Nationals, it’s a slightly different story—they’re the seventh-most prolific base stealing team in baseball with multiple threats.

But the whole point of this article isn’t to say that I’d rather face the Mets because their guys don’t steal very many bases. The point is it doesn’t matter how many bases they’ve stolen this year. When you’re this bad at keeping runners honest, anyone can steal a base off your guy.

Yoenis Cespedes only stole four bases last year when he did this:

When you’re in the playoffs and there is no such thing as a margin for error, this idea that the other team can turn a single into a double at will is scary.

In my previous article looking at TRAA, I mentioned that Joe Maddon was going to have the whole team work on this. He’d get the pitchers to vary their times. He’d make them work on their moves. They’d have some designed plays. If a player was getting too comfortable, someone—anyone!—would call time out and go talk to the pitcher.

I haven’t seen a big difference in all of this from last year to this year. There seem to be more pickoff attempts from the catchers, and that at least is something. But unless Maddon has some playoff tricks up his sleeve, this is going to be a weakness teams look to exploit in the playoffs.

Is this an emergency issue that should keep you awake at night like it has for me? Of course not—this is one of the best teams we’ve ever seen on the North Side. This is me being an alarmist and a negative Nancy.

Tags: Jon Lester, Pitching, Running, TRAA |
Carlos Portocarrero
Follow @CarlosPorto
Carlos is originally from Guatemala, where nobody cared about baseball—not that he's bitter about it or anything. He now lives in Chicago, where he tries to get White Sox fans and Cub fans to just "get along."
read more from Carlos Portocarrero