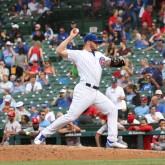 “It’s just a bunch of stuff that happened.” -Homer Simpson Always go to Homer for the last word on anything. Wait, not that Homer? Well, whatever. At the tine of writing, Cubs fans have seen an unprecedented run of position player pitching. There were three against the Cardinals last Friday, and then two more on […] 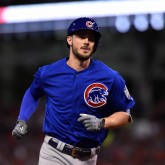 It’s nigh time we indulge in one of the late offseason’s finest traditions: the ceremonial handwringing over projections! Baseball Prospectus released its 2017 PECOTA projections, and, as always, there are some interesting quirks that deserve some cursory inspection. So, let’s get right to it. You can access the Cubs’ full projections on Baseball Prospectus’ main […] 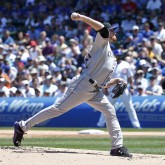 The Cubs have spent the winter squirreling away pitchers, even those rife with injury histories and who have struggled to live up to prospect hype. They signed Brett Anderson in the hopes that he can stay healthy enough to supplement the rotation and keep them healthy for another postseason stretch. And they traded for Butler […] 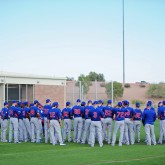 Earlier this week, Jeff Paternostro released BP’s top-10 Cubs prospects, and many of the expected players peppered the list. At the top were Eloy Jimenez, Ian Happ, and Albert Almora (who has not yet lost prospect status), further down we saw Jeimer Candelario, Dylan Cease, Oscar de la Cruz, and Eddy Julio Martinez. There were […] 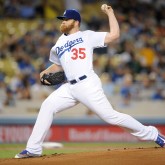 As the Chicago Cubs look to repeat as World Series champs, they are currently seeking a little extra help in the starting rotation. With Kyle Hendricks, Jon Lester, Jake Arrieta, John Lackey and Mike Montgomery as the expected starting five, the need isn’t urgent, but adding quality depth now could be the difference between another […] 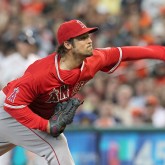 Pitching rotations can appear to be sure things when it’s the offseason or even when it’s spring training, but they have a nagging penchant for never finishing the same way that they started. Teams need depth in this way, and sometimes it comes from within the organization, and sometimes it must be acquired from without. The […]

For the past couple of years, many of us have pointed out the lack of controllable starting pitchers in the Cubs organization. With the minor league system still lacking impact arms at the upper levels, the Cubs might have to look outside the organization to acquire controlled arms. Given the extremely steep price of proven […] 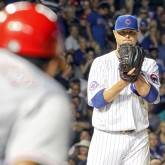 I have to stop hanging out with Joel Reese. In case you’re not familiar with our little podcast, it’s called BP Wrigleycast and it features Ryan Davis, Isaac Bennett, Joel Reese, and myself. Ryan makes solid arguments that run counter to many popular opinions. Isaac has strong views on developing players and is right more […] 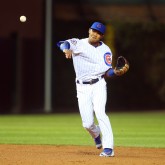 Growing up in the Chicagoland area in the mid 1990’s, it was impossible to escape the shadow of the Chicago Bulls. Each summer seemingly brought a new championship to the city complete with a parade that usually culminated with someone like Steve Kerr making wise cracks at Grant Park. Since Space Jam holds a special place in […] 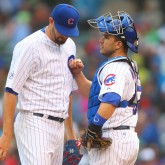 Quietly, Miguel Montero and Jason Hammel have been huge parts of the Cubs’ success over the last two seasons. Montero was worth 3.9 WARP in relatively modest playing time last year, and has been worth 1.3 WARP already this year—in addition to which, he’s been Jake Arrieta’s partner in crime, Willson Contreras’s mentor, and one […]