As Tom Petty once said, the waiting is the hardest part. As the Cubs have capped off their successful 2016 season with lineups that include Javier Baez at first base, Tim Federowicz catching, and the likes of Rob Zastryzny/Jake Buchanan starting,  fans have cast about for reasons to continue to pay attention, all the while constantly glancing down at their phones to check the scores of the Giants/Cardinals/Mets games. So, while we were waiting, I decided to analyze a member of the Cubs bullpen that I’ve been quite uneasy over for a while now: Hector Rondon.

At the time of Aroldis Chapman’s acquisition, just before this year’s trade deadline, you could have made a decent case on baseball terms alone that the Cubs didn’t really need a closer. They had Hector Rondon, after all. Check out Rondon’s stat line for the 2015 second half and the 2016 first half:

No, Rondon didn’t have the ridiculous 40 percent strikeout rate that Chapman possesses, but those are still premier closer numbers over a decently large sample size. Some Cub fans must have been wondering why the front office was wading into trade waters to acquire someone to replace a closer who was already top notch. Unfortunately for Rondon, his 2016 season peaked in the first half. I’ve broken out his 2016 second half stat line below:

In fairness to Rondon, he did miss time in August with a triceps injury, and who knows how long he pitched in pain before he went on the DL. Still, it’s a huge drop-off in performance from where Rondon was from across the previous calendar year. Let’s breakdown what might be causing Rondon to go from being the Joe Borowski from 2003 earlier in the 2016 season to being the Joe Borowski from 2004 now.

Below, I’ve broken out Hector Rondon’s innings pitched, ERA, FIP, strikeout rate, and walk rate on a monthly basis from the beginning of 2014 to YTD 2016. 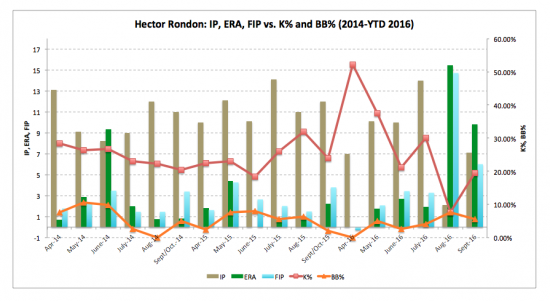 You can see that throughout 2014, Rondon sacrificed some of his strikeout rate totals to cut down on his walk rate, which was approaching ten percent at the end of June 2014. Rondon’s strikeout rate hovered just above twenty percent until July 2015 when something major changed. Below I’ve broken out Hector Rondon’s fastball and slider number of pitches and whiff rate by month for 2014 – YTD 2016. Rondon’s slider usage began increasing in 2015, but in July 2015 the whiff rate for that slider also increased substantially. 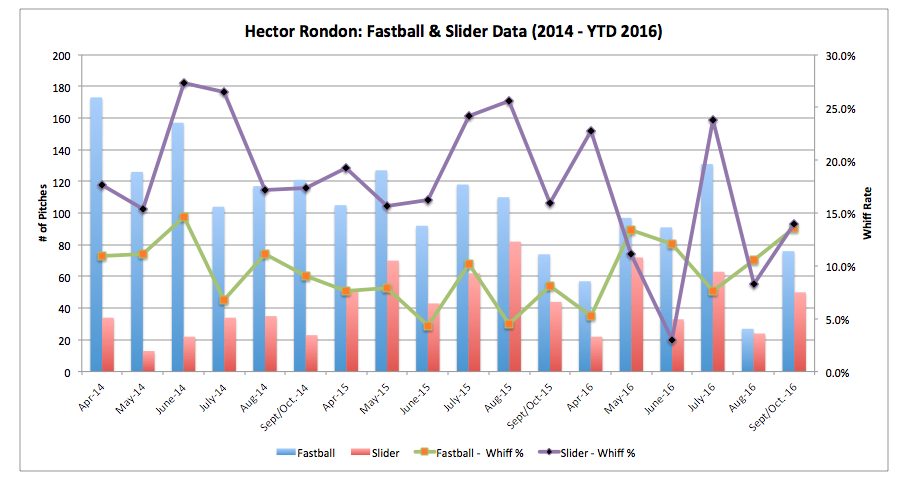 In particular, Rondon began trusting and using his slider more often on two strike counts beginning in July 2015, which in turn contributed to his increased strikeout rate through the second half of the 2015 season. Put another way, from 2014-2016 the correlation coefficient between slider whiff rate and overall strikeout rate was 0.394, which is a moderately strong correlation. If, however, we just measure from July 2015 to the end of the 2016 season, the r increases to 0.517. Check out the breakout below of Rondon’s two-strike pitches from April – June 2015 vs. July 2015 – June 2016:

Now, compare those to Rondon’s two strike performance since 7/1/16:

Rondon’s slider whiff rate on two-strike pitches fell to just above nineteen percent from 7/1/16 to the end of the season, which is an approximately twenty percent drop off from Rondon’s corresponding results for slider during his dominant run from 7/1/15-6/30/16. This coincides with the eye test as the Pirates hit two home runs off of Hector Rondon last week; both of these home runs were on sliders thrown with two-strike counts. Each of these pitches lacked the bite to send them darting out of the zone, and instead hung right in the middle of the zone. Rondon’s slider ineffectiveness extends beyond two strike counts; below I’ve listed the results and averages for each individual Rondon pitch from 7/1/15 – 6/30/16 vs. 7/1/16 – YTD 2016.

Since Rondon is primarily a two-pitch pitcher (four-seam fastball, slider), his slider ineffectiveness since 7/1/16 has hindered his fastball success as well as hitters no longer fear Rondon’s breaking pitches. An example of this is last Saturday’s matchup vs. Joey Votto. After giving up a double on a another two-strike slider that drifted out over the plate to Ivan De Jesus, Rondon once again found himself in a two-strike count. However, instead of going to his slider (which most likely would have been the case earlier in the season), Rondon went with a 97 mph four seam fastball that Votto crushed into the right center gap for another double. Rondon’s slider ineffectiveness has also forced the Cubs reliever to go to his secondary pitches (sinker and change up) more often, which has led to very mixed results.

Here’s the part where I talk myself off the ledge. Hector Rondon had a horrible 2016 spring training (12.38 ERA and a 2.38 WHIP), but got off to an excellent start in April/May before tapering off. Additionally, Rondon’s velocity looks to be back; during his nine appearances since returning from the disabled list Rondon’s four seam fastball has been hitting the high nineties pretty consistently. As such it could be more likely that Rondon’s slider ineffectiveness is due to some sort of a mechanical flaw instead of an underlying health issue. With the layoff until game one of the NLDS it’s possible this flaw gets fixed, and we get to see a replay of this, only instead of Stephen Piscotty it’s Buster Posey, or Yoenis Cespedes, or maybe even Daniel Murphy. That being said, Rondon, Bosio & Company could fail to fix his slider and the struggles we’ve seen from Rondon in the 2016 second half could manifest themselves once more in the playoffs. All we can do now as fans is what we do best: Worry.

Tags: Hector Rondon, Slider |
Matt Petitt
Follow @@petitt_matt
Matt Petitt is a consultant in the financial services industry who grew up near and now resides in the Windy City. He likes to think of himself as level headed, but he once ate an entire box of Golden Grahams during a Cubs playoff season-ending loss, so it’s probably best that you decide for yourself.
read more from Matt Petitt

A real concern and certainly the Cubs and now the league has picked up on this. It will be interesting how Maddon either manages around this or if (let us hope when) Rondon cures his slider bite than is used in high leverage situations.

Strop seemed to have his bite and hope the pressure does not wilt Edwards curve ball or flatten out Montgomery’s bender. Does any of this have any bearing between Grimm and Smith, is Grimm dependable enough to be that rally fireman to come in and put down a brewing fire?

Rondon is the key as it was the presumed double down strength that Chapman provided in closing out 6 outs with a lead, reducing the odds of teams scoring a winning margin to 21 outs backed by Cubs historic defense in efficiency and range.

He was more reliable than Strop who by being the 7th inning bridge was the best in baseball at that spot, where Edwards might be the best potential 6th inning baton man.

Like every champion team it is the sum of its parts that are better than the individual pieces.