Success in the playoffs generally has as much to do with being hot at the right time as it does with fielding the best team on paper. The Cubs will certainly have the latter, but the former will be in question as the NLDS starts on Friday night. This “being hot” is a difficult thing to measure precisely, but it can often be the product of individual player performances coming together to carry the collective whole.

So whether the likely playoff rotation of Jon Lester, Kyle Hendricks, Jake Arrieta, and John Lackey can stem the tide from either the Giants or Mets is one question, but after the offense fell so flat in last season’s NLCS, the larger question might be whether the offense can produce when called upon.  When they do produce, this can sometimes mean relying on production from unlikely sources, like Jorge Soler in the 2015 NLDS, and it’s possible that that unlikely source this season will be one whose postseason roster spot was a question mark just a month ago.

Identifying the starting catcher on the Cubs roster is quite a bit more challenging than on most teams, but in many respects, that’s still Miguel Montero’s role. When the season began, Joe Maddon planned to use the trio of Montero, David Ross, and Kyle Schwarber as his backstops, and though that did not come to fruition because of injury, Willson Contreras effectively slid into Schwarber’s place later in the season. What threw that plan out of sync even more was the steep drop off in offense from Montero. By mid-August, he was nearly playing himself out of the catching rotation with an OPS barely above .600 and slowly declining defense to go with it.

Montero’s offense has never been robust, but when taken as a whole, this season has marked a noted dip in performance. His WARP is nearly half what it was last year, and his TAv has dropped over twenty points from 2015. But, when his final month of the regular season is pulled away from the rest, there’s some reason for optimism going into the postseason.

First, when looking at his monthly splits, there’s an unmistakable upward trend in the last month of the season:

April through August, even with a couple of slight ticks in the right direction, represent a career-worst year. It’s evident that September is the anomaly and it really salvaged his season numbers as a whole, but the question, then, is what should be credited for this change and whether this improved offense can be expected in the postseason. Montero did start the year on a very good note, but was derailed in the first two weeks by a back injury that has lingered throughout the season. A couple of weeks ago, Montero hinted that his back might be feeling better, and that could be leading to improved timing at the plate and the confidence that goes with it, “Confidence is there. It’s something we have to take full advantage of because you don’t know how long it’s going to last. That’s hitting. It comes and goes.”

Montero’s hitting has certainly come and gone (but mostly gone) this season, but this still feels like an overly simplistic explanation. A few days after vaguely alluding to his confidence level, Montero indicated that he was spending time watching video of David Ortiz and incorporated a leg kick, “It’s not that I wanted to hit like him. I wanted to see how he got going because he’s got the leg kick when he gets started. I was watching in slow-motion and told myself I’m going to practice this in the batting cage.”

Following a handful of sessions in the cage with this new leg kick, Montero tried it out against live pitching. In a simulated game against Hector Rondon a month ago, Montero incorporated the leg kick and immediately saw the benefit, “I felt pretty good. I saw the ball well, I recognized his pitches. I put a couple good swings on him. And it was the turning point this year. I felt good with my timing. It actually was there.”

This is the kind of small change that has made a notable impact for other hitters, like Jason Heyward ditching the toe tap in his swing, and given the spike in his numbers in September, it appears that it’s working for Montero. It’s had no significant impact on his batted ball speed, as those numbers are in line with the rest of his season, but one of the things that has changed is the number of balls he’s hitting for grounders in the last month of the season: 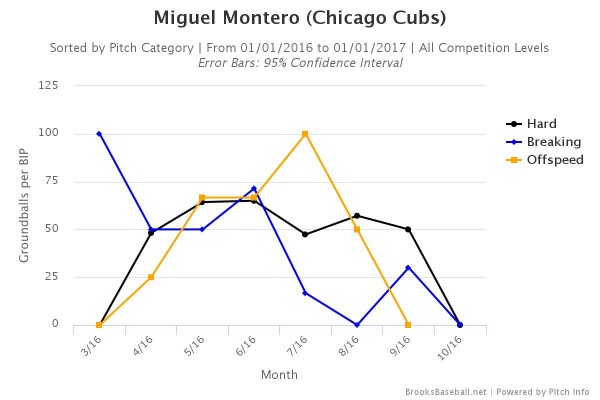 He’s hitting for more line drives as well, but the difference there is smaller. He’s also shown a shift in his isolated power, especially where he’s able to get to pitches to make contact. For some perspective, here’s what June, by far his worst month of the season, looks like: 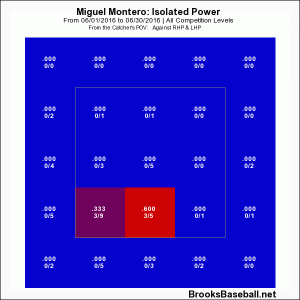 Obviously there’s a lot of blue, but all of his quality contact is coming from essentially one spot in the zone. Unless a pitch was right down the middle or slightly away, he wasn’t doing anything with it. Now, starting with September 5—just after he incorporated the leg kick—to the end of the season, here’s the difference: 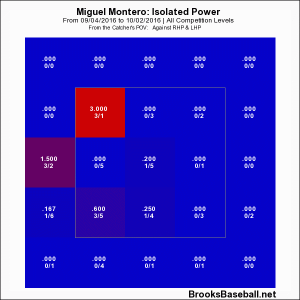 It’s not dramatic, but while he’s still getting to pitches in the same parts of the zone, he’s clearly expanding his reach. The sample size might be too small to judge whether this is the product of his newfound leg kick, but the monthly splits shown above offer at least that something has changed. And for the better. And significantly.

As for the sustainability of this success at the plate, whether the cause is improved health, a newfound leg kick, or both, it’s worth looking at monthly BABIP splits. Again, we’ll look first at the month of June: 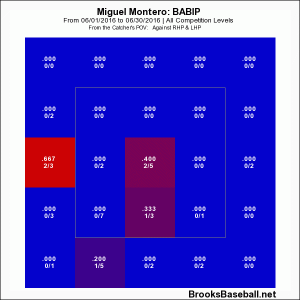 And then from September 5 to the last day of the regular season shows something a little interesting: 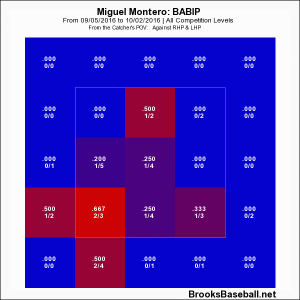 There’s a definite increase in his BABIP from the middle of the season to the end, but that doesn’t necessarily mean that he has simply been luckier. Keep in mind that he’s hitting fewer ground balls, for instance, and that he finished the season with an increase in his flyball rate and a decrease in his popup rate: 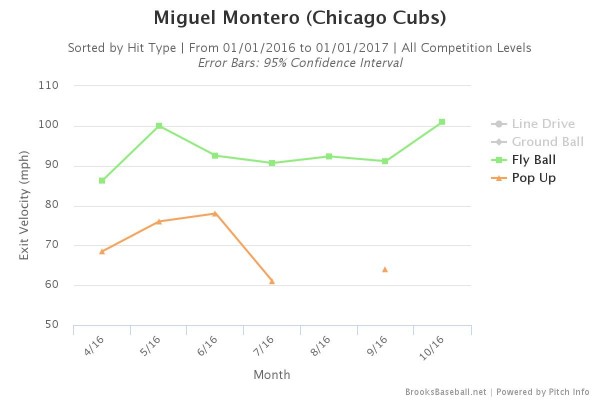 It’s slight, but with the sample sizes in an individual month’s worth of plate appearances being so small, a few extra batted balls that get over the infield or land past an outfielder can make a tremendous difference. In a playoff series that’s as short as five games and in which Montero might play in just one or two, a single line drive can have weighty impact.

No one would argue that Montero is not in the twilight of his career, so it’s unlikely that he’ll post numbers in 2017 that are much better than what he’s done this season, but in the microcosm of October baseball, that’s not what’s important. All the Cubs might need from him in the coming weeks are a few timely hits anyway.

Tags: Improvement, Miguel Montero, Postseason |
Jared Wyllys
Follow @@jwyllys
Jared lives in suburban Chicago with his wife and four young children who he shares his love of baseball with. When he's not doing that, he teaches and reads baseball history.
read more from Jared Wyllys

3 comments on “Hot at the Right Time, Montero Ready for October”

“….like Jason Heyward ditching the toe tap in his swing, and given the spike in his numbers in September.”

Sorry, the “spike in his numbers” bit refers to Montero, not Heyward.

But you’re right, Heyward definitely has his work cut out for him this offseason.

My bad. Read it very quickly.

It must have been hard sitting not being able to play while Contreras splashed onto the scene. I know the guys talk about the great team dynamic that exists but of course there’s still some competition amongst them. Anyway, I hope the change in approach has lasting success.