There could not have been a more formidable opponent than Clayton Kershaw for the Cubs to have to get past on their way to their first World Series berth since pre-integration baseball. There’s a lot to unpack from the games that sent the Cubs to face Cleveland in the Fall Classic, but perhaps little more so than just the first inning of Game Six.

Kershaw’s battle plan of firing fastball after fastball worked with brutal effectiveness in Game Two of this series, and with extended rest, there wasn’t reason to imagine that he couldn’t do it again. The resurgence of the Cubs offense carried them easily through Games Four and Five, but the specter of Kershaw loomed so large over Saturday night that the Cubs faithful could be forgiven for pinning their hopes on Game Seven instead.

But, in hindsight, that was an underestimation of the North Side offense. With the knowledge of Kershaw’s league-leading tendency to throw a strike on the first pitch, they went after that, and it worked. The Dodgers ace throws a pitch in the zone nearly 70 percent of the time to begin an at bat, and though those pitches can often be murderous to try and make solid contact against, the Cubs approached him Saturday night with that in mind.

While they carried this out well throughout the game, the first inning was an interesting anomaly. First, Kershaw threw first pitch balls to each of the first three batters of the night. Dexter Fowler, Kris Bryant, and Anthony Rizzo all took took a ball on the first pitch, and it wasn’t until Ben Zobrist came to bat that he threw a first pitch strike. But, interestingly, only Javier Baez, the second to last batter of the inning, swung at the first pitch. And not only that, he was the only one to do so in that inning.

In contrast, only Kyle Hendricks let the first pitch go by him in the second inning, but by then, the Cubs had already made their statement. Kershaw, whose first inning runs during the season could be counted on one hand, coughed up two in the opening frame Saturday. Though partially aided by an Andrew Toles error that felt eerily like the kind that usually doesn’t go the Cubs’ way in games like this one, the Cubs had already scored by the time Kershaw had thrown just over half a dozen pitches.

Dexter Fowler, whose regular season on base percentage belies his potential to score on a single swing sometimes, took just three pitches to hit a wall-banger ground rule double. Fowler could be forgiven for avoiding that first pitch of the at bat, as it missed the zone badly, but what’s telling is the location of the third pitch: 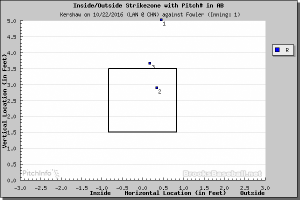 A slider left far too high. It might have been ball two, but Fowler crushed it instead. Bryant took the first pitch as well, this one a fastball very low and inside, so much so that an attack on the first pitch approach would have been rendered ineffective. Bryant fouled off the next two, a fastball and a slider in the middle of the zone, and then Kershaw attempted to hum a fastball low and away, and usually his 95 mile per hour offering would do the trick, but not this time. The problem was that this fell right into a spot where Bryant has seen ample success: 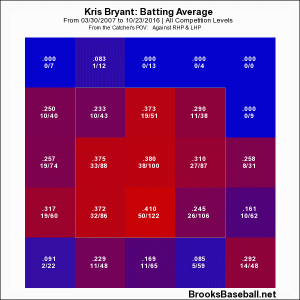 This means that, instead of striking him out, Kershaw watches Bryant hit an RBI single. Two batters, no outs, and there’s a run already scored. Anthony Rizzo was the first to extend his at bat, taking nearly as many pitches as Fowler and Bryant combined to hit a slider to Andrew Toles in left field, who miffed the catch almost inexplicably. This not only erased the best opportunity to record the first out of the game, but created the chance for Ben Zobrist to drive in the second run of the inning, via sacrifice fly.

Almost a third of the “30 pitches of hell” came during Javier Baez’s at bat. Baez followed Zobrist, and though he made the second out of the inning, he took eight pitches to do so. He fell behind in the at bat, swinging and missing on a pair of fastballs, but fouled off three other pitches—two fastballs and a slider—and let two of Kershaw’s sliders go to the dirt to make the Dodgers hurler battle to even record a routine popout to first base. 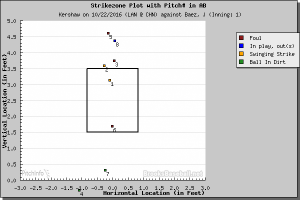 As seen above, Kershaw lived dangerously high in the Baez at bat, though it did not end in further scoring. Really, he was perhaps fortunate that Baez chose to swing at his fastball that was well above where he should have been swinging.

Willson Contreras, two-thirds of the way through the Cubs lineup, was the final out of the first, but he saw something unique: a Clayton Kershaw curveball. This pitch strangely evaporated in the two games Kershaw pitched against the Cubs in the NLCS. Though he didn’t go to it especially often during the 2016 regular season, it still ranked as his third most used pitch and his second best in terms of whiff rate. But that pitch strangely betrayed him in this series, and though he was able to avoid trouble in Game Two, he couldn’t make it work this time. Of the fifteen curveballs he threw in Game Six, only one was for a strike. Compare that to the regular season, when he was able to hit the strike zone with his curve nearly a third of the time.

Later that same night, the Cubs cast aside a lifetime of unmet hopes three additional runs later. As Tom Haudricourt of the Milwaukee Journal Sentinel put it in a tweet when Kershaw left the game, “Cubs four innings from putting seven decades of badness to rest.” The final task of a World Series championship is still to be put to rest, but a great leap in that direction was taken in those thirty pitches in the first inning Saturday night.

Tags: Clayton Kershaw, NLCS, Postseason, Second City October |
Jared Wyllys
Follow @@jwyllys
Jared lives in suburban Chicago with his wife and four young children who he shares his love of baseball with. When he's not doing that, he teaches and reads baseball history.
read more from Jared Wyllys