What you need to know: Paging Commissioner Manfred! The Cubs have a new idea for quickening the pace of play: Skip the 8th inning.

Mike Montgomery fell victim to the hot-hot-hot Eric Thames-Ryan Braun duo (“Thraun”?) surrendering two runs in the 8th inning today. Thraun was more than the Cubs could handle, with 2 home runs, 2 doubles, 2 singles, and 5 runs scored between the two of them.

Next Level: Before the Brewers piled on the Cubs’ bullpen woes, this was a fun, competitive game contrasting The Brewers’ power with the Cubs’ small ball.

John Lackey threw lots of strikes—as he tends to do—a welcome change after the walks surrendered by the bullpen in Sunday’s game. Alas, Lackey threw some particularly bad strikes up in the zone that even United could not re-accomodate into ground balls. But kudos to the Brewers for punishing these mistakes: they hit all of their dingers off pitches where Lackey missed his spot, per the three skid marks on this chart: 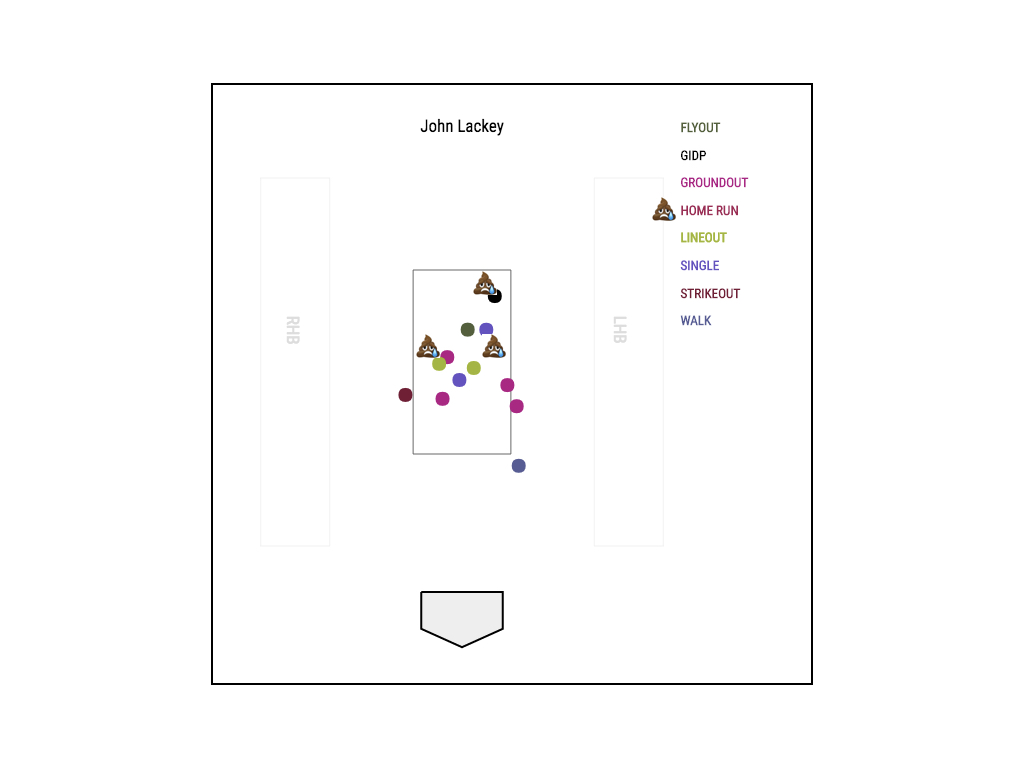 The Cubs, on the other hand, opted for small ball, with nary a run courtesy of a ball hit over the fence. So while the chicks didn’t dig it, the BABIP Gods did. The lone wellspring of true joy in this game came from the Cubs’ big boppers delivering two magnificent bunt hits against the shift:

First, by Schwarber to lead off the game:

And later by Rizzo in the bottom of the 5th:

Someone I know wrote about this type of bunt against the shift as a new weapon in SchwarbRizzo’s arsenal. That idiot argued that they should probably swing away most of the time, which they did in other plate appearances: Rizzo hit a 101.8 mph line shot caught by Braun in left, and Schwarber hit a 99.9 mph screamer into the shift for a 4-3 one-hopper groundout. Arg.

While Heyward’s efforts did not contribute much to the outcome of the game, he looks so very different at the plate this season. His second plate appearance really struck me. He drilled a changeup down the line just foul, drilled another one over the roof, and was still right on a 92 mph fastball, down 0-2 in the count, fouling it straight back. He flew out to right eventually, but he looked . . . dangerous. And in the 8th Heyward hit a 95 mph fastball with an exit velocity of 100 mph that fell victim to the shift notwithstanding a hit probability over 80%.

Persona non grata in the bullpen, Pedro Strop, recorded a clean inning in the 7th notwithstanding a barreled ball (100.2 mph exit velocity, 28 degree launch angle) by Jonathan Villar. After Hector Rondon’s solid outing on Sunday, hopefully these two bullpen stalwarts are starting to turn things around.

Albert Almora’s two-run double in the bottom of the 2nd inning (+.162), to the elation and agitation of the Almora Fanboys and Fangirls.

Ryan Braun’s two-run dinger in the 1st inning (-.155), because there is no justice in the world.

The Cubs look to end their skid tomorrow night, with Brett Anderson taking the hill against Jimmy Nelson.

Dan Hodgman
Follow @@daniel_hodgman
I live in Lincoln Park with my wife, who thinks I am crazy because I can sit and watch every pitch of the Cubs season without going insane, and my 160-lb mastiff, who just wants to sleep, eat, and poop. I write about baseball in the hopes of one day changing both of their perspectives.
read more from Dan Hodgman