“He became an icon. I don’t know how many clubbies can say that.”
-Ryne Sandberg on Yosh Kawano

Many of us who have attended a game at Wrigley Field have spent several moments admiring the flags flapping in the breeze and breathing in the smell of history emanating from every nook and cranny. We can reflect on the legacy of Ernie Banks and Jackie Robinson and share in the hope and dismay felt by all those who sat it our seats before us. But hidden away in the home clubhouse is one bit of history we cannot access. Tacked above a locker is a plaque that reads “The Chicago Cubs dedicate their clubhouse to Yosh Kawano, a gentleman who has devoted over 40 years to serving the needs of the ownership, management and players of the Chicago Cubs.” Written between the succinct lines on this plaque is the story of a man whose relationship to baseball expounds on one of America’s most shameful moments. 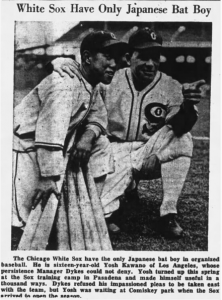 Yosh Kawano had always been a fan and player of baseball, and in 1933, at the age of 12, he was caught stowing away on a ship to Catalina to watch Cubs spring training games. Two Cubs executives aboard the ship concocted a punishment for Kawano that had him shine shoes for the Cubs. The next year, Kawano wrangled his way into being the White Sox’ spring training bat boy, and the following summer he showed up in Chicago, ready to be the club’s full-time bat boy. However, he was sent back to California as he had nowhere to stay and was too young to work. But he continued to play the game.1

Then, in 1942, he and his family were rounded up and sent to the Poston War Relocation Center in Arizona. The concentration camp was swiftly constructed on seized Native American land following the enactment of Executive Order 9066, which designated certain areas military zones and labeled Italian, German, and primarily Japanese-Americans the enemy. In an effort to protect American values of freedom and equality, over 100,000 citizens were rounded up and forced into pens. Poston was the largest camp, a connection of three different camps, nicknamed Roastin’, Toastin’, and Dustin’ for their desert location, so remote the authorities decided watchtowers were unnecessary. The prisoners were forced to build infrastructure intent on consolidating scattered Native American tribes in the state.2

“Some people have taken issue with the title of my book, Baseball Saved Us, saying that just playing baseball didn’t save anybody from the camps situation. Of course it didn’t! But…it provided a few hours of enjoyment in an otherwise bleak situation.”
-Ken Mochizuki

Shortly after being interned, Kawano wrote a letter to Jimmy Dykes, who he had befriended during the first spring training incident. Kawano told him it was the hottest place he had ever been, where “if you threw up a white baseball it came down black.”3 An organization in Pasadena contacted Dykes to vouch for Kawano’s American loyalty, and shortly after, Kawano arrived in Chicago, ready to work for the team as bat boy. However, faced with numerous fan protests, Kawano was forced to take an anonymous position under the bleachers. Though baseball helped him escape, it did not offer refuge from the imprisonment of being a person of Japanese descent in America.

In 1943, with the vouching of Dykes and the White Sox, Kawano was allowed to enlist in the military. For eighteen months, he served as an intelligence officer in the South Pacific, fighting for the country that refused to do the same for him. Again, Kawano’s baseball connection came in handy. One night, American officers almost shot him because they assumed he was a Japanese enemy. Luckily, in the group of Americans was Ken Silvestri, a former White Sox catcher. Recognizing the man, Kawano called out to him until Silvestri confirmed Kawano’s identity and got the soldiers to lower their guns.4 Following the war, Kawano again returned to Chicago, this time assuming a clubhouse role with the Cubs.

Kawano instantly became popular among the players and management. He was promoted to clubhouse manager in 1951 and there were rumors he had a contract for life with the team. He was attentive to the particularities of each player, and his sense of humor was frequently on display, particularly when he suggested catcher Charlie Silvera switch to number 8 in hopes of embodying Yogi Berra.5 In 1996, he received his own plaque of the Walk of Fame, and during the ceremony, every played donned his signature sailor’s cap.6

While Kawano’s devotion to baseball helped him navigate life outside the camps, his imprisoned counterparts also utilized baseball. American traders introduced the game to Japan in the 1870s, and the first mainland Japanese American team, the San Francisco Fuji club, was organized in 1903. Japanese Americans quickly latched onto the game, viewing it as the perfect blending of Japanese and American values, such as discipline, patience, teamwork, and competition. The game became an extension of their identity and a humanizing factor during their imprisonment. Indeed, one of the first things Japanese Americans did in these camps was create baseball fields and teams. For those less fortunate than Kawano, participation in baseball offered them the only means of connecting to the outside world. Baseball was so revered by Americans that the guards often facilitated matches among teams from several concentration camps as well as various amateur teams.7

In Poston, which held upwards of 17,000 prisoners, baseball games consistently drew crowds of 2-3,000, and those against white teams occasionally drew double that. As neighborhoods were frequently evacuated and incarcerated as a group, baseball teams typically contained a number of people who regularly played together, creating a sense of unity and comfort. As time wore on, leagues expanded, introducing new players to baseball and deepening its connection to Japanese American identity.8

“Generally speaking, prejudice is less, east of the Missouri River, or roughly, east of 95 degrees latitude”
-The Disciple Herald, 1945.

Kawano was not the only Japanese-American to land in Chicago. As part of Roosevelt’s War Relocation Authority’s dispersal program, thousands of Japanese-Americans were forced to move to Chicago, a city deemed far enough from Japanese military that these people could pose no threat to American security. The availability of a diverse array of jobs made Chicago an optimal relocation city for the WRA which assumed economic assimilation would precipitate cultural assimilation. In 1944, Roosevelt ended Executive Order 9066, and Japanese Americans began the process of reintegrating into society. The city’s ethnic Japanese population grew from 400 to 20,000 by this time, and despite government warnings, Japanese communities sprouted in both the south and north sides of Chicago.9

This proximity to Wrigley further fostered their interest in baseball, an interest that perpetuated the cruelest twist of irony. When the Roosevelt administration first proposed the idea of military zones, there was much debate over which group to target. One proposed the Italians, but that was quickly dismissed because of Joe Dimaggio. Unleashing war on the people of the most popular figure in baseball and an American hero would be political suicide for the regime. Instead, they would make an example of the Japanese, who possessed no such figure and could easily be painted as un-American.11